The Indian market ended higher on Tuesday with frontline indices Sensex and Nifty up 1 percent each led by gains index heavyweights like RIL, HDFC Bank, ICICI Bank, and SBI. NTPC, SBI, Vedanta, Reliance Industries, and Bajaj Finance were the top gainers on the Nifty50, gaining between 3-4.2 percent. IT stocks like Tech Mahindra and Infosys were among the biggest losers on the index. All sectoral indices, except Nifty IT (down 0.4 percent), ended the day in green.

The Indian market ended higher on Tuesday with frontline indices Sensex and Nifty up 1 percent each led by gains index heavy weights like RIL, HDFC Bank, ICICI Bank and SBI. Asian peers lifted the sentiment, gaining, after two sessions of losses, as US Treasury yields edged higher, easing concerns about a recession in the world’s largest economy. The stronger rupee also supported the equities.

The S&P BSE Sensex ended at 38,233, up 424 points, while the broader NSE Nifty50 settled at 11,483, adding 129 points. Meanwhile, broader markets were in-line with frontline indices. The Nifty MidCap and Nifty Smallcap gained over 1 percent each.

NTPC, SBI, Vedanta, Reliance Industries, and Bajaj Finance were the top gainers on the Nifty50, gaining between 3-4.2 percent. IT stocks like Tech Mahindra and Infosys were among the biggest losers on the index, falling 2.5 percent and 1 percent, respectively. IOC, UPL, Coal India, and Wipro also fell during the day.

All sectoral indices, except Nifty IT (down 0.4 percent), ended the day in green. Nifty PSU Bank index rose the most, up over 3 percent, followed by Nifty Bank, Nifty Metal and Nifty Fin Service.

Nifty IT was the only sectoral index ending in red 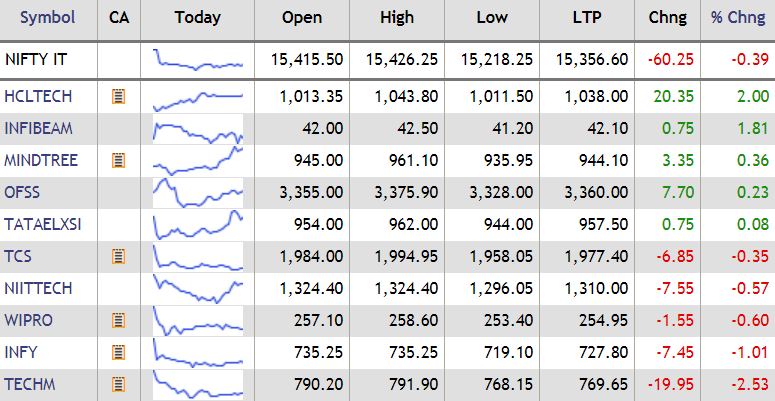 Sectoral Trend: All indices except Nifty IT ended the day in green 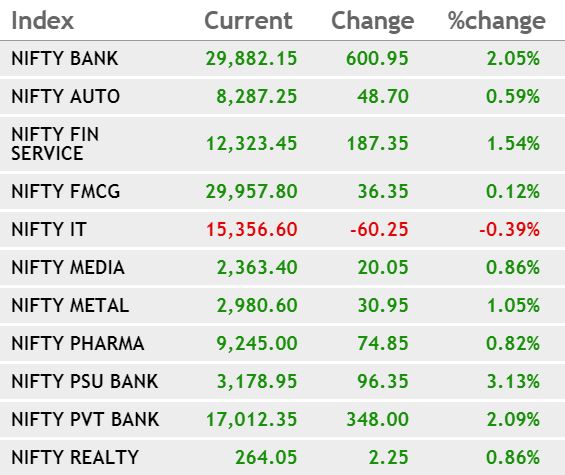 Top Nifty Gainers and Losers: NTPC up 4%, Tech Mahindra down 2.5% 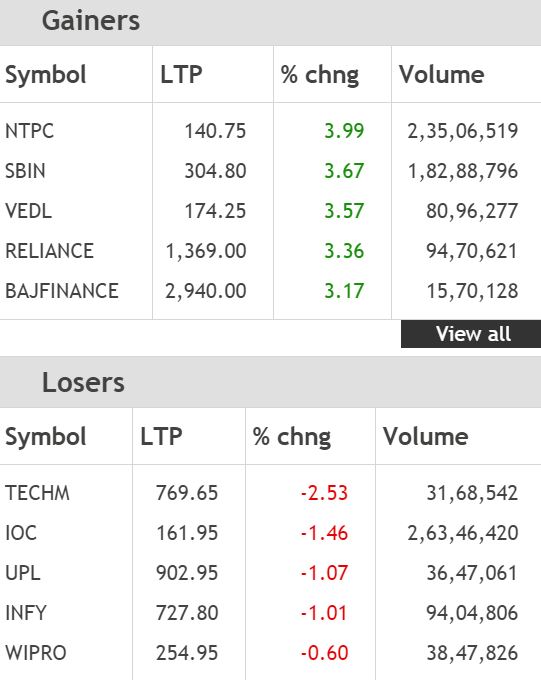 Global Markets: Asian shares tick up as US bond yields come off late-2017 lows Asian shares drifted higher on Tuesday after two days of losses as US 10-year Treasury yields edged up, but the outlook remained murky as investors weighed the odds of whether the US economy is in danger of slipping into recession.

Goldman Sachs keeps Brexit bets unchanged after UK parliament takes control Goldman Sachs stuck to its estimates of Brexit outcomes on Tuesday after British lawmakers voted late Monday to seize control of the parliamentary agenda for a day to break the impasse in Britain's tortuous exit from the European Union. Although Adrian Paul, European economist at the US bank, said he was sceptical the "indicative votes" planned for Wednesday would prove conclusive, he said they may pave the way for a softer Brexit. "Many of the options most likely to succeed point towards a "softer Brexit" than currently envisaged by the Prime Minister," he said. READ MORE
Share:

HCC to transfer arbitration awards, claims of Rs 1,750 cr to investors led by BlackRock. The transaction will result in a partial write-down of the company's net worth. HCC will use proceeds from the transaction to repay debts worth Rs 1,250 cr & the remaining Rs 500 cr will be utilised for business growth

DSP Healthcare Fund has invested in two foreign healthcare stocks, namely Abbott and Abiomed. He said 6 percent of the fund is allocated to these two stocks.

“These stocks have a long runway in terms of growth. Healthcare is a space where smart technology is going to make inroads. Both these companies are focused on cardiology and diabetology side of the business and with patient population growing fast in these areas in the world and these technologies are getting adopted incrementally. So that is the rationale for investing in these two stocks,” added Khemka. READ MORE

Laurus Labs enters into a strategic partnership with Global Fund, stock up 4%

Laurus Labs gained over 4 percent as it entered into a strategic partnership agreement with Global Fund for a period of 3.5 years. Through this long-term agreement, Laurus Labs will have volume commitments from the Global Fund for the treatment of HIV/AIDS

Elara Capital on midcaps: Why and what to buy Ravi Sundar Muthukrishnan, head of institutional equity research at Elara Capital, has written a note titled, Midcaps: Why and what to buy. Talking about mid-cap stocks, he said, “We like the replacement market space and that’s the reason why we put Amara Raja Batteries. We like the discretionary space so we have put Crompton Greaves Consumer Electrical and among city gas, we like Gujarat Gas because new long-term gas supply is going to come in the offing.”
Share:

Should Indian investors be spooked by the sharp fall in US bond yields? Analysts answer 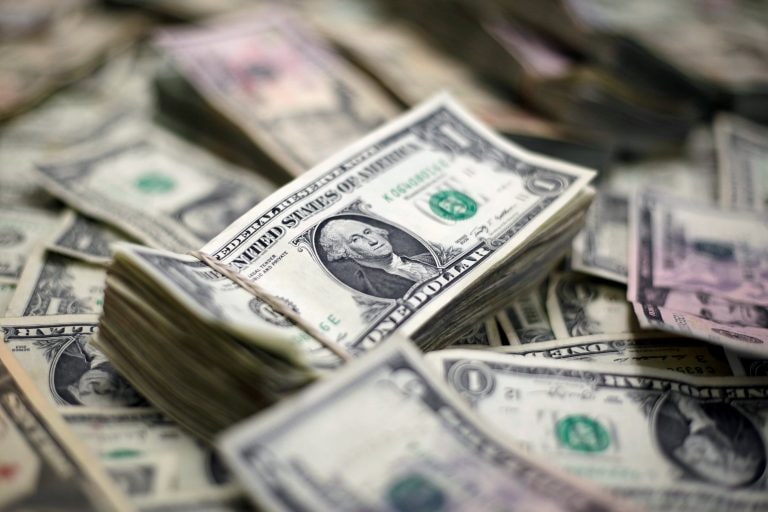 Analysts feel the pressure on Indian markets would subside in the near-term as domestic macro-economic sentiment remains strong ahead of general elections.Get latest Market online at cnbctv18.com

How Mindtree's buyback plan can avert hostile takeover bid from L&T The board of IT services firm Mindtree will meet on Tuesday to discuss a share buyback proposal. The founders of Mindtree, who together own 13.32 percent in the company, are trying to fend off a Rs 10,800-crore hostile takeover bid from L&T, India’s largest engineering company, by buying back shares from public shareholders.

The move helps the company to consolidate its ownership and boost key financial ratios by using up the unused cash (or shares), preserving the share price and uplifting the assets. Click here for more

India will be seen as a safe haven by global investors, says Andrew Holland Andrew Holland, CEO of Avendus Capital, is of the view that the foreign flows into India will continue going forward despite global growth concerns.

"Since US is in a recession leading to pressure on US yields, India will be seen as a safe haven and moreover Indian market is also catching up", Holland told CNBC-TV18 on Tuesday.

"Six months out, we are likely to see a stable government, lot lower interest rates globally and in India, lower commodity prices both in oil and metals – all this is a great environment for flows into India", said Holland. Watch interview here

Jet Airways' resolution plan was announced on Monday and according to analyst Jal Irani of Edelweiss Financial Services, it paves way for a new buyer.

“In whatever shape or form Jet survives, I do not think there is going to be a carrier with about 124-126 planes at its peak and I think it is going to, at the most, survive in a much smaller form. Therefore, anybody buying the company will have to look at it from that perspective,” Irani told CNBC-TV18 on Tuesday.

“The bottom line is that the path has been paved a bit but it is not going to be necessarily very easy for the sale to happen,” he said. On the stock price front, Irani said, “We are not recommending anybody to buy the shares.” Watch interview here

Reliance Industries, ITC shares gain on report of Rs 150-crore John Players deal Shares of Reliance Industries (RIL) gained over 1 percent on Tuesday, while ITC traded marginally up on report the cigarette major has sold its men's apparel brand John Players to RIL. The Economic Times reported that Reliance Trends, the retail arm of RIL, and ajio.com will buy John Players from ITC in a deal worth Rs 150 crore. Reliance Retail could add about Rs 350 crore to its retail sales with the acquisition of John Players, the report said citing people with knowledge of the matter. READ MORE
Share:

DLF shares jump 7% on QIP plan to raise Rs 3,000 crore Shares of DLF rallied nearly 7 percent on Tuesday as the realty major launched its QIP offer to raise over Rs 3,000 crore. DLF is selling 17.3 crore equity shares to qualified institutional investors at the floor price of Rs 193.01 per equity share. The company may offer a discount of up to 5 percent on the floor price in the QIP, it said in a regulatory filing on Monday. READ MORE
Share:

KNR Construction bags order worth Rs 233 cr for construction of fly over at Ramanathapuram & Sungam Junctions. Projects to be completed within 24 months
Share:

No difference of opinion among our large shareholders on L&T deal, says Mindtree CEO Ravanan

The board of Mindtree will meet today to deliberate on whether to proceed with the share buyback proposal. The founders of Mindtree, who together own 13.32 percent in the company, are trying to fend off a Rs 10,800-crore hostile takeover bid from L&T, India’s largest engineering company, by buying back shares from public shareholders. Rostow Ravanan, MD & CEO of Mindtree, spoke to CNBC-TV18 about what they plan to achieve at today's board meet and cultural differences that are likely to emerge if the L&T deal goes through. Click here or full interview

Vijay Mallya on Jet Airways rescue plan: 'Only wish the same was done for Kingfisher'

Embattled Vijay Mallya, who is currently facing trial in a UK Court, took to Twitter to highlight the "double standards" of the NDA government, and questioned why public sector banks pitched in to save Jet Airways but let his company, Kingfisher Airlines, "fail ruthlessly."

In a series of tweets reacting to banks led by State Bank of India taking over management control of troubled Jet Airways, Mallya said, "Happy to see that PSU Banks have bailed out Jet Airways saving jobs, connectivity and enterprise. Only wish the same was done for Kingfisher". READ MORE 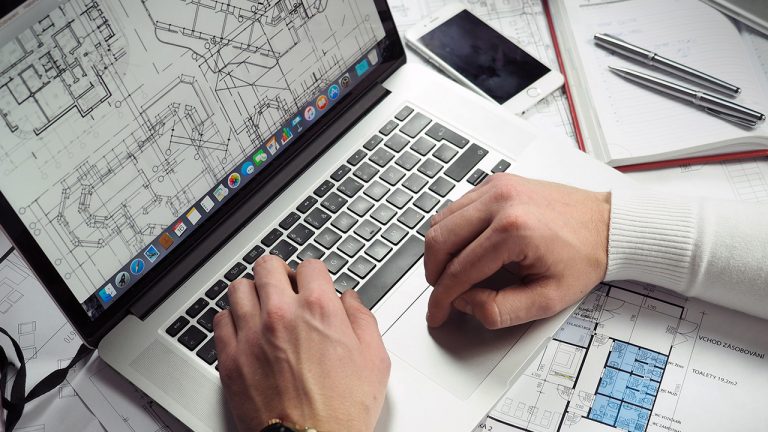 Data-wise, the S&P BSE Sensex gained 16 percent till date in FY19, while the NSE's broader Nifty50 index gained 13 percent in the given period.

Jet Airways surges 9% after founders Naresh Goyal and wife Anita stepped down from board Jet Airways gained nearly 9 percent, extending past 2 days' gain in early morning deals on Tuesday after founders Naresh Goyal and wife Anita Goyal stepped down from the board of the cash-strapped airline on March 25. Naresh Goyal also ceased to be Chairman. The stock has rallied over 22 percent since yesterday as reports emerged of Goyals exiting the board. The board also approved the issue of 11.4 crore equity shares to the lenders upon conversion of Re 1 of the outstanding debt. Lenders will infuse up to Rs 1,500 crore via debt instruments.
Share: