Market rally broad based for first time since FY17; 24 stocks account for over 75% of BSE100 performance in FY21 so far

The Indian equity market has seen a sharp recovery since April 2020 on the back of massive foreign capital inflow, low-interest rate environment globally and improving risk sentiment.

However, it is important to note that the market rally in FY21 so far has been broad-based as the small-cap and midcap indices have outperformed large-caps for the first time since FY17.

The number of stocks contributing to more than 75 percent of BSE 100 index gains has risen to 24 in FY21 to date which is the highest over the past four years, according to ICICI Securities report.

"The bulk of the equity market performance since FY17 has been driven by a handful of stocks while the broader indices have underperformed significantly. However, the tide is turning in terms of the number of stocks contributing to majority of the index performance," the brokerage house said.

The anatomy of FY21 market rally indicates four distinct phases where high level of sector and style rotation has been observed. Activity in Phases II and IV indicates that the rally is becoming broad-based, the report noted. 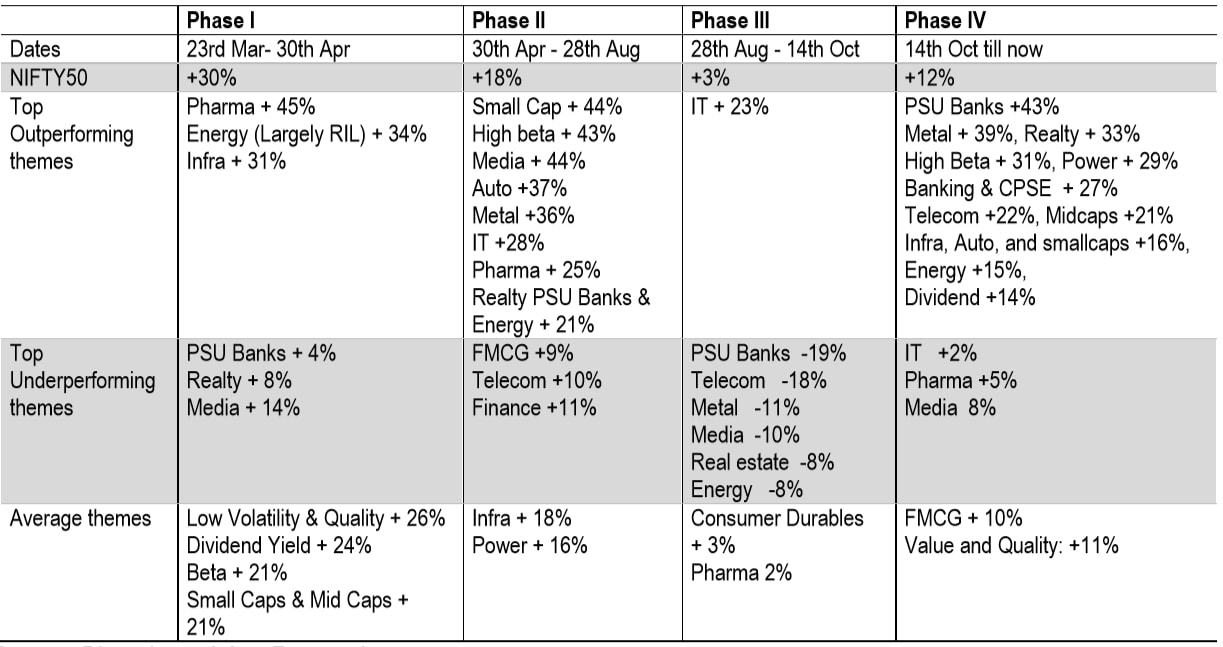 However, analysts believe that the market valuations continue to turn expensive as it is now above +1 s.d. on CAPE ratio, while on the trailing and forward P/E it was already above +1 s.d.

"Market cap to GDP has shot up to 95 percent due to a mix of better market performance and falling nominal trailing GDP. Valuation on P/B is reasonable at the long-term average of 3x (trailing basis), ICICI Securities said.

Meanwhile, Angel Broking expects the rally in cyclical and beaten down sectors to continue given the risk-on environment globally.

"We believe that auto, chemicals, select private BFSI names, consumer durables and cement should continue to do well. We also expect the rural, essential and digital theme to continue playing out over the next few quarters given revenue visibility and strong growth prospects," Angel Broking said.