Indian equity markets ended sharply lower on Monday as trade war fears gripped the street, extending Friday's losses as benchmark indices ended trade at one-month's closing lows. The Sensex gave up 39,000 mark, while the Nifty also slipped below its 50-day moving average of 11,681. Broader and sectoral indices also fell sharply with all sectoral gauges down, particularly metals. Only four Nifty stocks closed in the green with Yes Bank as top gainer. Here are the main highlights and developments from the stock markets today:

After connecting over 2.62 crore households with power supply connection under Saubhagya scheme, the Narendra Modi-led government has now advanced its goal to provide 24-hour quality and reliable power supply across India. However, state-run power distribution companies are yet to meet the operational and financial targets set under the scheme UDAY (Ujjwal Discom Assurance Yojna). READ MORE

Cement stocks down on likely fall in prices in monsoon

Shares of most cement companies were down as investors were cautious on likely slowdown in demand as construction activity crawls during the monsoon season. Monsoon rains had hit Kerala coast on June 8. Shares of ACC, Ambuja Cement UltraTech Cement, Shree Cement, India Cements and JK Lakshmi Cement were down 0.6-3.2 percent at 2.40 pm.

Airtel Africa expects London IPO to be priced between 80-100 pence a share Airtel Africa Ltd, a unit of India's Bharti Airtel Ltd, on Monday set a price range of 80 to 100 pence per share for its planned initial public offering on the London Stock Exchange. The IPO is expected to raise 595 million pounds ($749.05 million) from the issuance of about 595.2 million to 744 million new shares. READ MORE
Share: 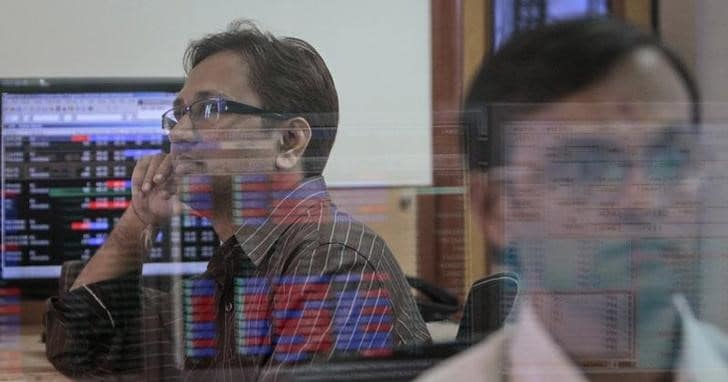 The NSE midcap sector signals a near-term top reversal pattern, and after witnessing high volatility in the last week, the sector has declined in this week, said HDFC Securities in its report.

PC Jeweller tanks 19% as CRISIL downgrades debt rating Shares of PC Jewellers tanked 19 percent to a six-month low of Rs 47.65 as ratings agency CRISIL downgraded its rating for the company's bank loan facilities. The downgrade comes as the company's balance sheet saw a rise in receivables as on Mar 31, as against the management's stance of reducing the total receivables, CRISIL said. The jewellery maker's long-term rating has been cut to 'BB+/Negative' from 'BBB+/Negative', while the short-term rating has been slashed to 'A4+' from 'A2'. Shares quoted at Rs 49.65, down by 15.27 percent on NSE.
Share: SpiceJet, which has been a long-term bet of Rakesh Jhunjhunwala, has delivered strong returns in the last 5 years.

A loss of whopping of Rs 3,300 crore, disclaimer of opinion from the auditors and impairment taken for assets of Reliance Naval and Engineering and Reliance Power—that was what Reliance Infrastructure of the Anil Ambani group had to report in its fourth-quarter earnings. READ MORE

Shriram Transport Finance shares fell over 6 percent on Monday after Piramal Enterprises sold its entire stake in the company. CNBC-TV18 reported that about 10 percent equity worth Rs 2,305 crore exchanged hands on NSE at around Rs 1,000-1,023 per share. Piramal Enterprises, in an exchange filing said, "The company has sold its entire direct investment of 9.96 percent in the fully paid-up share capital of Shriram Transport Finance Company Ltd to third party investors on the floor of the stock exchange." READ MORE

Divi's Lab up 3% as US FDA clears Andhra Pradesh unit Shares of Divi's Laboratories rose over 3 percent to Rs 1,573.25 as the US Food and Drug Administration cleared the company's Chippada unit in Andhra Pradesh with zero observation. The US regulator had conducted an inspection at the unit on June 10-15.
Share:

Metal companies down on trade war, weak data from China

Metal shares took beating on Monday amid reports that the ongoing US-China trade tariff war will hurt margins. Weak economic data from China, the world's largest consumer of metals, also adversely impacted sentiment. China's industrial production grew only 5 percent in May, the lowest increase since 2002, furthering slowdown concerns.  The Nifty Metal was down 2.35 percent at 2875 points, the worst performer among sectoral indices. Tata Steel and JSW Steel were the top two drags on the index falling between 3 and 4 percent.

The latest analysis and commentary by stock market guru VK Sharma of HDFC Securities on what is moving the markets today. Check out his top stock recommendations.

The Indian market is not very sensitive to trade issues, said Arvind Sanger, managing partner at Geosphere Capital Management, adding that the impact on major Indian companies of trade tensions was modestly negative. “I think that the Indian market is not that sensitive to these trade tensions. So it is not a big deal... the bigger concern is the bigger trade moves going on globally are likely to be a headwind for global growth and that is a negative for the Indian market,” said Sanger in an interview with CNBC-TV18. READ MORE

ASM Tech falls 7% as stock trades ex-dividend  Shares of ASM Technologies fell over 7 percent today as the stock traded ex-dividend. The micro-cap IT firm had announced a final dividend of Rs 3 per share. Shares of the company were down 3.4 percent at Rs 103.10 on BSE. Meanwhile, the Sensex traded lower by 178 points, or 0.45 percent, at 39,274.
Share:

The latest analysis and commentary by stock market guru VK Sharma of HDFC Securities on what is moving the markets today. Check out his top stock recommendations. READ MORE In an interview with CNBCTV18.com, Ashutosh Tiwari, Head of Research at Equirus Securities talks about markets' expectations from Budget 2019 and the ongoing NBFC crisis.

-Broader markets have fallen in tandem with both NSE and BSE midcap indexes falling well over over a percent.

-All 43 gagues are trdaing in the red with BSE Metal, BSE Energy and Nifty Media among the worst falling sectors.

Jet Airways shares decline 15% after PMO calls for a review on the airline Extending losses for the eighth straight session, shares of Jet Airways fell 15 percent in opening trade on Monday after the PMO called for a review on the debt-laden airline. The stock fell as much as 14.9 percent to hit a new low of Rs 69.75 per share on the BSE. At 9:35 AM, the stock was trading 13.4 percent lower at 71.05 per share as compared to 0.30 percent (120 points) fall in the BSE Sensex at 39,331. READ MORE
Share:

Shares of Reliance Infrastructure plunged 14 percent intraday after the Anil Ambani-led company reported a consolidated net loss of Rs 3,301 crore in the fourth quarter of 2018-19, its biggest ever loss. In its press release, the company said, "Net loss is largely a result of one-time impairment of Reliance Naval and Engineering Ltd acquired  in 2016 which was already NPA (non-performing asset ) company." READ MORE

Expect overall food inflation is likely to rise towards 4 percent over the coming four-five months, outpacing Reserve Bank of India's (RBI) indicative trajectory, said Edelweiss in its research report. The report further added that food inflation is expected to rise, although core should moderate further. The rise in headline CPI (Consumer Price Index) is seen to be normalization of food inflation rather than a deteriorating dynamic. READ MORE

Piramal Enterprises likely to have exited Shriram Transport, sells 10% of its stake Block deal: Shriram Transport sees 10 percent equity worth Rs 2,305 crore exchnaged on NSE at Rs 1,000-1,023 per share. As of March 31,  Piramal Enterprises holds 9.96 percent stake as of March 31. The company had bought 10 percent stake at Rs 723 per share in 2013.
Share:

Opening Bell: Sensex, Nifty slip after flat start, Yes Bank, Indiabulls Housing gain, BPCL dips Indian shares slipped after a flat start amid concerns over rising oil prices, delayed monsoon and trade dispute with the US. Benchmark indices, the BSE Sensex and the NSE Nifty50, started the week on a tepid note. The Sensex was down by 47.78 points, or 0.12 percent, to trade at 39404.29 at 9.17 am. The Nifty was down 22.90 points, or 0.19 percent, to trade at 11800.40. Cadila Healthcare, Aurobindo Pharma, Asian Paints, L&T, Titan Company, ICICI Bank, M&M were major gainers in early trade, while losers included JSW Steel, Tata Steel, Axis Bank, BPCL and IndusInd Bank. All other sectoral indices traded lower barring Infra.
Share:

Indian rupee opens unchanged at 69.80 against the US dollar