Equity indices ended higher on Friday on broad-based gains across all sectors, but primarily in banks, FMCG and metal. The Sensex closed at 37,947.88, higher by 284.32 points, or 0.75 percent, while the Nifty 50 surged 85.70 points, or 0.75 percent, to 11,470.75. For the week, the Sensex surged by 0.3 percent, while the Nifty gained half a percent. Sensex gained 284 points, but ended the session 76 points shy of record closing level of 38,024 hit on August 9. ITC was the biggest Index gainer followed by another FMCG major HUL and banking stocks like SBI and ICICI Bank. While market had a broad-based gain today, it was curtailed to an extent by auto stocks such as Hero Moto, Maruti, Eicher and the financial heavyweight HDFC. In the broader markets, Nifty Bank posted a gain of more than 300 points, of which 160 points were contributed by SBI & ICICI Bank. Nifty Midcap index too gained on the same line as benchmark indices, saw a move upward of 222 points to 19,443.

HUDCO to divest statke in NBCC, shares dip over 2%

Shares of NBCC dipped by 2.06 percent, trading lower at Rs 73.75 on the BSE at 3.18 pm on reports of HUDCO deciding to divest stake in the firm through OFS. The HUDCO will soon call for a Request For Proposal (RFP) for appointment of merchant bankers for NBCC, HUDCO OFS soon.

Shares of RITES Ltd rose 13% to hit their all-time high of Rs 324.90 tracking the strength in broader market and backed by heavy volumes. So far today, over 7.85 million shares of the company have been traded on NSE, sharply higher than the daily average volume of 3.8 million shares. Shares traded at Rs 313.55, higher by 9.82 percent on NSE at 2.50 pm.

The Sensex rallied higher on Friday ahead of the last hour of trade, reclaiming 38,000. The 30-share BSE index spurted to 38.009, spiking by 0.92 percent, while the Nifty 50 neared its all-time high of 11,495, rising to 11,482, rising by 0.85 percent, or 97 points. Indexes were pulled higher by Bank, financial services, metal, pharma, realty, FMCG in particular. All sectoral indices on the NSE were trading higher with the PSU Bank surging over 3 percent. Nifty Bank also rose to 1.21 percent, while Nifty FMCG and Metal were near 1.9 percent higher. PVT Bank, Pharma, also trade surged between 1.18 percent and 1.34 percent. Only Oil & Gas traded in the negative, near flatline among BSE sectoral indices. BSE Metal and FMCG, Basic Materials, Healthcare, Bankex, Consumer Durables surged by up to 1.91 percent. 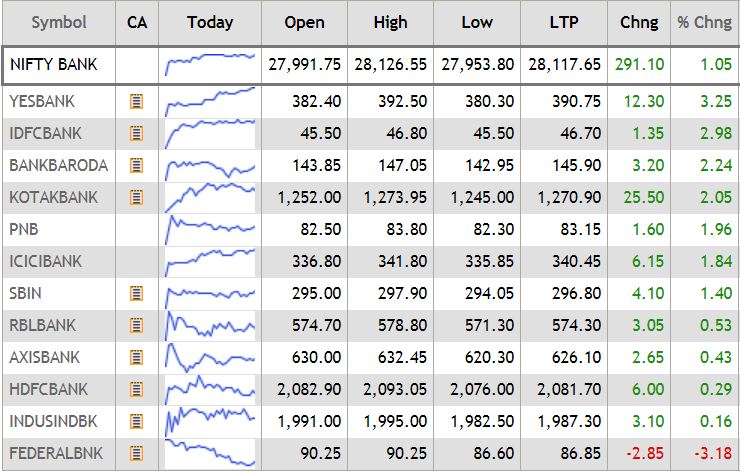 Equity indices have sustained gains with the Sensex rising by over 281 points to 37,945, while the Nifty 50, trading higher by 80 points to 11,464. Benchmark indexes have gained by 0.75 percent on the back of buying in all sectors, but especially Private Bank, Pharma, Metal and FMCG.  The Nifty Pharma index has extended its winning streak to the fourth day and hit a six-month high of 9780.95 points, following a strong earnings season by drug makers for the quarter ended June. The rupee's sharp depreciation against the US dollar this week also aided the gains in the sector. The rise of the index has been led by shares of Cadila Healthcare, Sun Pharmaceutical Industries, Aurobindo Pharma and Lupin. (with inputs from Cogencis)

After over 8% gains in the previous three sessions, shares of GAIL India today fell over 1% on profit booking by some investors. The natural gas producer's shares had risen sharply in the last three sessions following strong earnings growth in Apr-Jun and analysts' upbeat view on the stock. Traders' positioning in the stock's options contracts, however, indicate that the uptrend may continue after today's pause. Shares traded at Rs 384.95, down by 2.25 percent on the NSE at 12.09 pm.

Shares of BSE-listed WPIL have risen 32 percent in three days following a robust performance by the company for the quarter ended June. On Friday, shares of the company rose 10 percent to hit a lifetime high of Rs 960. The company, on Tuesday, posted a near fourfold on-year jump in net profit to Rs 242 million for the June quarter. Revenue from operations for the quarter surged 88 percent on-year to Rs 1.4 billion. At 11.25 am, shares of the company were 7.9 percent higher at Rs 942. (Cogencis)

Benchmark indexes advanced higher on Friday on broad-based gains in all sectors, particularly banks, metal, pharma, FMCG and realty. The Sensex was trading 300 points higher or up by 0.79 percent to 37,962, aiming for the 38,000 mark. The Nifty 50 also spiked by 86 points, or 0.76 percent, to 11,471.10. Nifty MidCap was trading higher by over a percent, while BSE MidCap too neared a percent. Nifty Bank has also surged by almost a percent and all other sectoral indices on the NSE trading in the postiive zone with no weakness at all. Only Nifty IT is below half a percent gain. Nifty Metal has surged by 1.73 percent, Nifty Pharma up by 1.45 percent, Nifty PSU Bank is higher by 1.06 percent, Pvt Bank above 1.174 percent and Realty at 1.13 percent higher. Shares of Grasim, Lupin, Tata Steel, Kotak Mahindra Bank, Vedanta, surged on the NSE by up to 3.31 percent. Sensex gainers included Tata Steel, Vedanta, Kotak Mahindra, Adani Ports, ITC, suring by 2.62 percent. THe laggards on the BSE index were Bharti Airtel, ONGC, Power Grid, Wipro, Bajaj Auto, declining by up to less than a percent. GAIL declined the highest on the NSE by 1.56 percent on profit-booking. Only BSE Utilities traded below near flatline among 19 sectoral indices on the BSE.

Jet Airways gains on reports of company Q1 on August 27

BSE MidCap surged by 0.67, while SmallCap and LargeCap also surged over half a percent. Among BSE sectoral indices, Basic Materials, Metal, surged by up to 1.52 percent with none out of the 19 sectoral indices trading in the negative zone.

Other major gainers among sectoral indices were Realty, Bankex, Auto, Industrials, while IT and Teck were marginally higher.

Nifty MidCap surged by 0.52 percent, while only Nifty IT traded in the red among sectoral indices on the NSE. Nifty Bank gained by 0.61 percent, Nifty PSU Bank was up 1.16 percent. Other notable gainers were Nifty Metal at 1.48 percent, Realty at 1.13 percent and FMCG at 0.79 percent.

The money market is closed on Friday on account of the Parsi new year. The Indian rupee collapsed to a historic intra-day trading low of 70.40 before closing at fresh life-time low of 70.15 per dollar on Thursday, down by 26 paise or 0.37 per cent over the previous close. The 10-year benchmark bond yield also dropped sharply to end at 7.86 per cent.

#StocksToWatch | Here is a list of stocks that will on today's radar pic.twitter.com/xH4NcE9tvS

State-owned IDBI Bank on Thursday said that retail slippages are expected to bounce back over the next few quarter. In an interview to CNBC-TV18, B Sriram, managing director and chief executive officer, said, "IDBI Bank is already looking at transaction with LIC to infuse significant money for controlling stake. But otherwise, capital requirement is based on credit cost."

UBS Securities India on Thursday said that rupee is expected to fluctuate between 68-72/dollar range in the near-term. In an interview to CNBC-TV18, Tanvee Gupta Jain, chief India economist, said, "So far, the Reserve Bank of India has been intervening in the foreign exchange market to reduce the rupee volatility, but since the external conditions do not look like they are settling down soon, there could be another $10-15 billion intervention in Fx market by the central bank. Beyond that, maybe the policy makers would either have to let the currency depreciate or announce some administrative or policy measures to stabilise rupee."

Oil, bank stocks: India's crude oil import bill is likely to jump by about $26 billion in 2018-19 due to the rupee's fall, which could fan inflation worries.

Steel stocks: During the first quarter of the fiscal year starting in April, India's steel imports from South Korea rose 31 percent from a year earlier, while those from Japan climbed 30 percent, PTI reported.

ICICI Bank, JP Associates: On behalf of lenders, ICICI Bank approaches RBI to prevent JP Associates from being sent to NCLT, seeking permission for an out-of-court settlement plan, arguing that the company's debt has reduced by half over the past 4 years.

Bank of India: The public sector lender will sell Rs 5,557.73 crores worth of bad loans.

GMR Infrastructure: The company has settled with the private equity investors of GMR Airports for Rs 4,800 crore, CNBC-TV18 reported.

Insecticides India: The company manufactures four of 20 pesticides banned by the government which contribute Rs 160 crore to the company's total revenue. The company said the impact on sales by four pesticides will be offset by launch of new products.

NBCC: The real estate company has bagged order from SAIL worth Rs 250 crore in Rourkela and Odisha.

Here's how specific stocks are rated by brokerage firms

Bad loans have been declining for a few quarters, says MS on ICICI Bank; OVERWEIGHT at a TP of Rs 460.

Optimistic on growth, comfortable on margins, says Kotak Institutional Equities on Godrej Consumers; SELL at a TP of Rs 1,100.

#JustIn | @jetairways board to meet on August 27 to announce Q1FY19 earnings
Alert: Board had deferred earnings in August 9 meet after audit committee had not signed#1QWithCNBCTV18 pic.twitter.com/2YwKqrCE0C

Here is what you need to know before the market opens

Asia: Shares rose after China and the United States agreed to hold trade talks and as the Turkish lira extended gains from its record low earlier this week. MSCI's broadest index of Asia-Pacific shares outside Japan was up 0.2 percent in early trade, a day after it hit its lowest level in a year. Japan's Nikkei gained 0.5 percent. MSCI's index of world stocks rose 0.63 percent on Thursday.

Rupee: The Indian rupee collapsed to a historic intra-day trading low of 70.40 before closing at fresh life-time low of 70.15 per dollar, down by 26 paise or 0.37 per cent over the previous close. The 10-year benchmark bond yield also dropped sharply to end at 7.86 per cent.

Trade conflict: China and the United States will hold lower-level trade talks this month, the two governments said on Thursday, offering hope that they might resolve an escalating tariff war that threatens to engulf all trade between the world’s two largest economies.

Oil bill: India's crude oil import bill is likely to jump by about $26 billion in 2018-19 due to the rupee's fall, which could fan inflation worries.

Debt securities listing: Sebi on Thursday drastically cut the timeline for listing of debt securities to six days from 12 days at present, in order to make the existing process of issuance of such securities simpler and cost effective.