Increasing LED adoption is the game changer for Lumax.

Lumax Industries, an end-to-end lighting solution provider across automobile segments, presents a good buying opportunity for investors. Lumax’s focus on LEDs will help it consolidate the leadership position in the auto lighting space, where it already has a 60 percent market share. The LED focus will also improve margins and add to the attraction of its lean balance sheet and strong return ratios.

Focus on LED lighting
Demand for LED lights continues to be very strong. Big original equipment manufacturers (OEMs) are widely adopting LEDs because they are more energy efficient and aesthetically appealing. The switch to BS VI emission norms and increasing adoption of electric vehicles, that need to be more energy efficient, will add more heft to LED demand.
Thus, Lumax’s aggressive focus on manufacturing and supply of LED bulbs unlocks a huge potential for both sales growth and margin expansion. The company’s association with Stanley Electric Company, a world leader in vehicle lighting and the only firm to manufacture LEDs worldwide, also gives it a technology edge.
LEDs contributed 35 percent to Lumax’s topline in the nine months ended December 2019 compared to just 5 percent in FY17. The management is targetting a LED contribution of 40-50 percent of total revenues by 2020. The low penetration in the commercial vehicle segment, where the company has 80 percent market share, will be a key factor in achieving this target.

Strong client base
Lumax has a very strong footing in the passenger vehicle lighting space and serves almost all leading OEMs in India. Maruti, the leader in PV segment, is Lumax’s largest client contributing 36 percent to total revenue followed by Honda Motorcycle and Scooter India (HMSI) with 14 percent share.
The top 3 customers generate around 61 percent of total revenues.During the quarter gone by, Lumax added new models such as Ertiga, WagonR, Jawa and Marrazo to its portfolio. These are expected to drive growth in the near-term as new models gain traction. 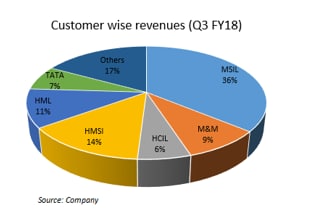 Skin in the game
The two promoters - the DK Jain family and Stanley Electric Company - hold 37.5 percent each. The high promoter stake should lend comfort to investors.
Strong financial performance – lean balance sheet and higher return ratios
Lumax has improved its financials over the years. It grew net revenues at a compounded annual growth rate (CAGR) of 10 percent over FY14-18. Over the same period, operating profitability, as measured by earnings before interest, tax, depreciation and amortisation (EBITDA), has improved 28 percent and EBITDA margin expanded 361 bps.
In fact, the margin continues to expand further with increasing contribution from LED products and stood at 9.61 percent at the end of Q3 FY19. The company has also been able to improve its cash flow position over years and has not only been able to repay its debt but also fund its expansion through internal accruals. This has led to an improvement in the return ratios as well. 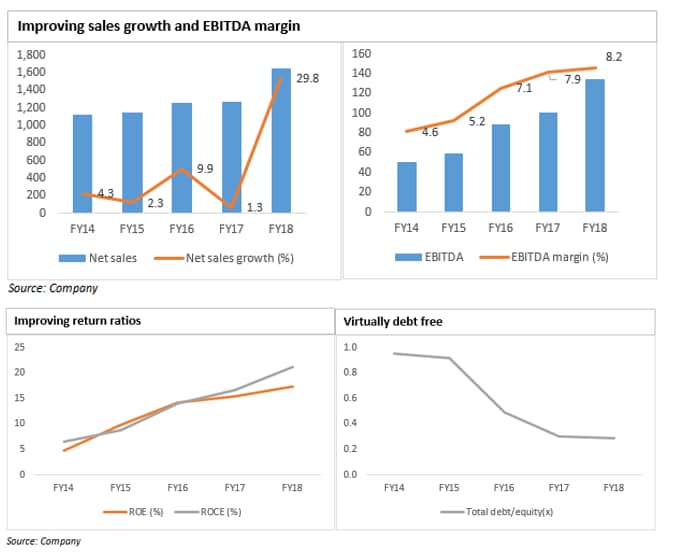 Encouraging latest quarterly performance
Despite a significant fall in the demand for passenger vehicles, the company’s revenues grew 16 percent year-on-year (YoY) in Q3 FY19 compared to the industry growth of 7 percent. The growth was led by a higher contribution from LED products and value led growth. Notwithstanding the rise in raw material (RM) prices, the company maintained its EBITDA margin at around 9 percent, driven by higher margin contribution from LED products.

Valuation
On the back of market volatility, Lumax shares fell 37 percent drop from their 52-week high. This has made the valuation very attractive. The stock currently trades at valuations of 20 and 15.0 times FY19 and FY20 projected earnings respectively. We advise investors to accumulate this strong business with an eye on the long term.

Disclosure: The views and investment tips expressed by investment experts are their own and not that of the website or its management. Users are advised to check with certified experts before taking any investment decisions.
(Source: Moneycontrol)
Check out our in-depth Market Coverage, Business News & get real-time Stock Market Updates on CNBC-TV18. Also, Watch our channels CNBC-TV18, CNBC Awaaz and CNBC Bajar Live on-the-go!