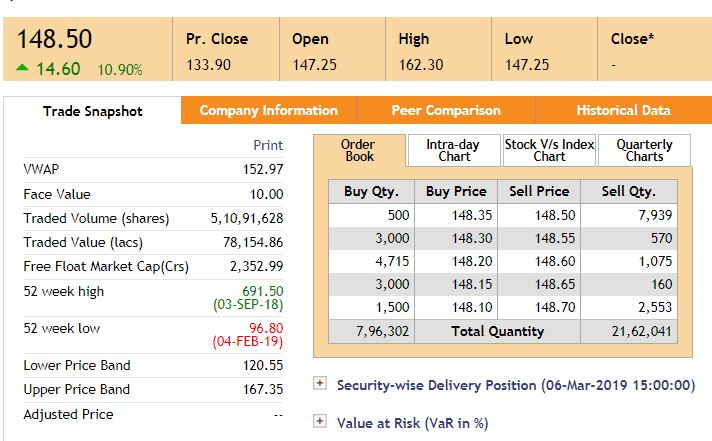 Among sectors Nifty Pharma and Nifty Fin Services were top performers, while Nifty Auto slipped in the red after rallying 3 percent in Tuesday's trade.

Shares of ITC were up 2 percent on Wednesday, extending its previous day’s 2 percent gain, on reports that cigarette maker has increased the price of three brands - Bristol, Flake Excel, and Capstan.

The Kolkata-headquartered company has increased prices by about 7 percent to 14 percent. The price of Flake excel is hiked by 11 percent, Bristol by 6.7 percent and Capstan by 14.5 percent by the company.
Share:

Coal India at 1-month high as company to mull interim dividend Shares of Coal India surged to a one-month high of Rs 246.20 as the company said its board will mull payment of interim dividend on March 14. The company's dividend, if announced, would follow a buy back of equity shares. The company had, in February, announced that it will buy back up to 44.68 million shares at Rs 235 apiece, a premium of nearly 6 percent to the market price at that time. The buyback window opened on Friday and will close on March 15. Coal India had Rs 41.9 billion as free cash at the end of March 31, data on Cogencis Corporate Fundamental Database showed. At 2.35 pmn, shares of the company traded 1.1 percent higher at Rs 243.80 on the NSE.
Share:

Salil Parekh is determined to make Infosys future ready A little more than a year in his role as chief executive of Infosys, Salil Parekh is ramping up investments in the digital field, expanding sales footprint and fixing compensation issues to take Infosys to the next level.

In this short time, the 54-year-old industry veteran has made multiple acquisitions, provided the much-needed impetus to the digital business and appointed key executives at various verticals. Click for full article

Indian stocks could see a pre-election rally, says Andrew Holland Andrew Holland, CEO of Avendus Capital Alternate Strategies, spoke to CNBC-TV18 about the chances of Indian stocks witnessing a pre-election rally and the simmering border tensions. According to Holland, "There is a possibility that we could see a pre-election rally because liquidity and market sentiment is on the upside at the moment. Globally, too the US-China trade deal could give the markets a pop higher and even if we were to see weakness in the economy, it would just mean lower interest or stimulus." READ MORE
Share:

Watch: 2019 is going to be a stock picker's market, says Kotak MF Midcap mania has gripped D-Street as stocks soared on attractive valuations and hopes of a return of the Modi government. Two top midcap fund managers Pankaj Tibrewal of Kotak MF and Gautam Sinha Roy of Motilal Oswal AMC spoke about the stocks they have their eyes on. Click here for more
Share:

Shares of Dilip Buildcon rose over 11 percent on Wednesday. The stock had gained over 16 percent in the previous day's trade. Dilip Buildcon shares have been witnessing an upward movement since 27 February when the company said it received a new order from the National Highways Authority of India.

#JustIn | Indian Hume gets letters of acceptance for 2 projects worth Rs 255 cr pic.twitter.com/8qRUnZZSdi

In an interview to CNBC-TV18, stock market guru SP Tulsian shared his views on individual stocks and market fundamentals.

With regards to various market sectors, he said, “I am keeping positive view on rural theme and taking positive call on the NBFCs, FMCG stocks or maybe the 2-wheelers and the passenger vehicle stocks going forward because the prices at which these stocks are seen ruling maybe the 2-wheeler stocks have risen in the last couple of weeks like Bajaj Auto and Hero Motocorp or even Eicher Motors but the passenger vehicle stocks are seen languishing at a very low level like Maruti and Mahindra and Mahindra.” READ MORE

Edelweiss Financial up; Canada fund to invest Rs 18 billion Shares of Edelweiss Financial Services surged 12 percent to a one-month high of Rs 173.30 as Canada's sovereign pension fund, Caisse de dpt et placement du Qubec, will invest Rs 18 billion in the company's non-banking financial arm ECL Finance. The investment will be in one or more tranches, through compulsory convertible debentures. Details such as the conversion price of the debentures and the tenure of the instrument were unclear. Brokerage house Citigroup Global Markets reportedly said the deal would lift the company's capital adequacy at a time when real-estate lending is somewhat subdued. However, the brokerage firm said the deal might not plug the liquidity gap immediately as the proposed equity infusion is just 3 percent of the company's risk-weighted assets worth Rs 580 billion. At 10.44 am, shares of Edelweiss Financial Services were up 6 percent at Rs 163.65. (Cogencis)
Share:

Renewable power solutions provider Suzlon Energy zoomed 194 percent from its record low of Rs 2.7, hit on February 5, 2019, in intra-day trade. Suzlon Energy shares were currently trading at Rs 7.95 per share, up 6.7 percent from its previous close on the NSE. In comparison, the Nifty50 was up 0.4 percent at 11,033. It was the most traded stock on the NSE, with over 133 million shares changing hands as of 10.35 am. The Suzlon Energy stock has gained nearly 102 percent in the last 1 month and 40 percent in the last week. READ MORE

Gold prices slipped on Tuesday to their lowest in more than five weeks as the dollar rose on stronger-than-expected economic data and rising US Treasury yields, while global equities prices rose on improved risk sentiment. Spot gold fell 0.3 percent to $1,282.82 per ounce as of 10:42 a.m. EST (1542 GMT). The session low was $1,280.70, the lowest since January 25. US gold futures dropped 0.3 percent to $1,283.80 per ounce. READ MORE

L&T surges on large deal win from Bengaluru Metro Rail Shares of Larsen & Toubro surged nearly 2 percent after the company said that its construction arm has won a "large deal" from Bengaluru Metro Rail Corp for design and construction of phase-2 of metro. The infrastructure behemoth describes an order win worth Rs 25-50 billion as a "large deal" under its new categorisation. Under the order, the company's arm will have to design and construct a total of five underground metro stations. The entire task is to be completed within 42 months. Shares were up more than a percent, quoting at Rs 1,320.10 on the National Stock Exchange.
Share:

DHFL shares soar after auditors give clean chit in Cobrapost case Shares of Dewan Housing Finance Corporation Ltd (DHFL) surged 20 percent in the opening trade after independent chartered accountancy firm TP Ostwal gave a clean chit to the company in connection with Cobrapost's allegations of financial fraud. DHFL shares rose as much as 20 percent to Rs 160.80 per share intraday on BSE. At 9:20 AM, the stock traded 17.80 percent higher at Rs 157.85 per share.

#Rupee opens lower at 70.59 against the US #Dollar pic.twitter.com/AtURj0QSCF

DHFL has no connection with shell companies named in Cobrapost investigation, says report Dewan Housing Finance Corp Ltd (DHFL) has not promoted any of the 26 shell companies, which were alleged to have siphoned off about Rs 35,000 crore of the company by investigative news portal Cobrapost, an independent review report released by DHFL said.

"There is no evidence of DHFL forming shell companies to divert funds, promoters hiding shareholding in any companies and insider trading", said a report by chartered accountant firm TP Ostwal & Associates. READ MORE