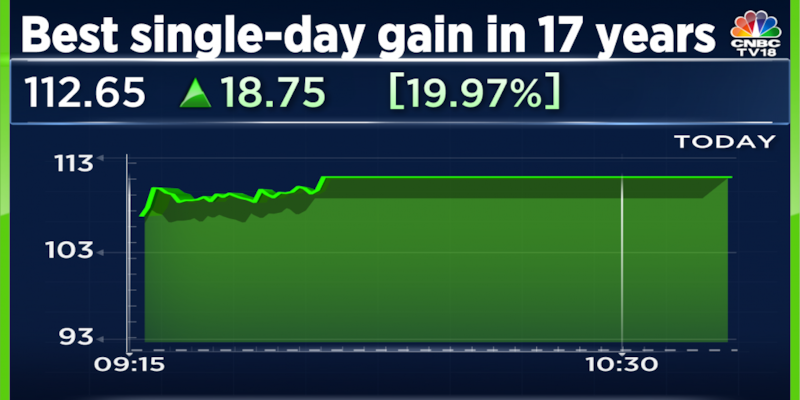 Karnataka Bank Ltd. shares surged 20 percent in trade on Wednesday after the lender reported its highest-ever quarterly net profit in the September quarter.
The bank posted a net profit of Rs 411.47 crore for the September quarter, up 228 percent from the year-ago quarter and 260.5 percent from the June quarter.
Net interest income (NII) during the quarter stood at Rs 802.7 crore, jumping 26 percent year-on-year and 16.75 percent compared to the previous quarter.
Karnataka Bank’s net interest margin (NIM) rose to a five-year high of 3.56 percent. NIMs increased from 3.15 percent during the same period last year.
Asset quality of the bank improved as Gross Non-Performing Assets moderated to 3.36 percent from 4.03 percent.
The bank’s non-performing assets (NPAs) also moderated as GNPAs (gross non-performing assets) reduced to 3.36 percent from 4.03 percent in the previous quarter.
The bank's Return on Assets stood at 1.7 percent from 0.57 percent during the same period last year. A firm's RoA is calculated by dividing the company's net income by the average of its total assets.
Restructured book of the lender also improved to 6.22 percent from 7.37 percent in the June quarter.
Shares of Karnataka Bank are locked in an upper circuit of 20 percent at Rs 112.65, which also happens to be its 52-week high. The stock has risen nearly 60 percent over the last 12 months while the Nifty Bank index has risen 13.5 percent during the same period.
This is also Karnataka Bank's best single-day gain since 2005.
(Edited by : Rukmani Krishna)
Check out our in-depth Market Coverage, Business News & get real-time Stock Market Updates on CNBC-TV18. Also, Watch our channels CNBC-TV18, CNBC Awaaz and CNBC Bajar Live on-the-go!