City gas distribution remains a potential growth story for investors and global brokerage Jefferies believes that the niche sector is poised for a faster recovery amid COVID-19 pandemic buoyed by three recent events. Within the sector, Jefferies suggests that Gujarat Gas ( GUJGA) and Mahanagar Gas (MGL) remain well-positioned to make most from the situation. Since March lows, GUJGA and MGL shares have jumped 54 percent and 52 percent, respectively. Meanwhile, Indraprastha Gas Ltd (IGL) surged 43 percent during the same period.

According to the Jefferies report, Petronet and Natural Gas Regulatory Board (PNGRB) order for GAIL and National Green Tribunal's strict action on polluting fuels, could result in volume upside and market share gains for Gujarat Gas. Meanwhile, the hike in the price of CNG price in Mumbai bodes well for the margins of Mahanagar Gas. 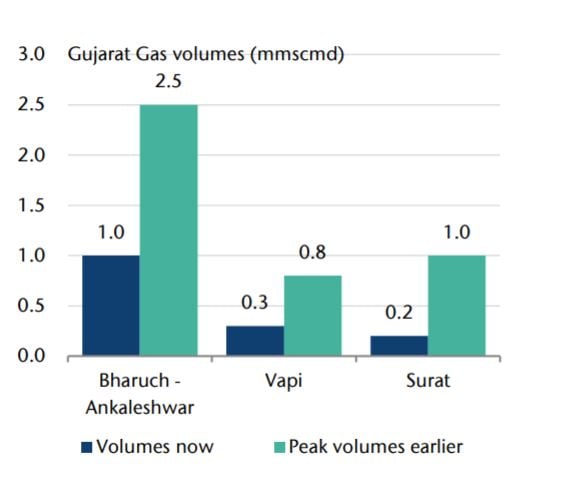 Recently,  PNGRB directed the GAIL to stop supplying gas directly to customers consuming less than 50,000 scmd in Dahej. These customers were directly connected to GAIL but were not handed over to GUJGA when the area was authorised to them in 6th round prompting them to raise the issue with PNGRB. "The same order if replicated in other areas could result in incremental upside in volumes. Average volume offtake from these customers could be ~ 30-40k smcd so even if ten customers are captured, it could result in volume upside of ~ 0.3-0.4 msmcmd (~ 5 percent of industrial volumes of GUJGA)," explained Jefferies in its report. Another positive trigger for GUJGA would be NGT's new order on the usage of petcoke. The regulator had earlier passed an order in November 2019 warning against the usage of polluting fuels in critically polluted areas (Eg: Bharuch-Ankleshwar, Morbi, Vapi, Tarapur falls under GUJGA coverage).

From margins standpoint, MGL remains well-positioned as it has hiked the CNG price by Rs 1/kg citing recovery of fixed costs amid lower volumes and rupee depreciation. 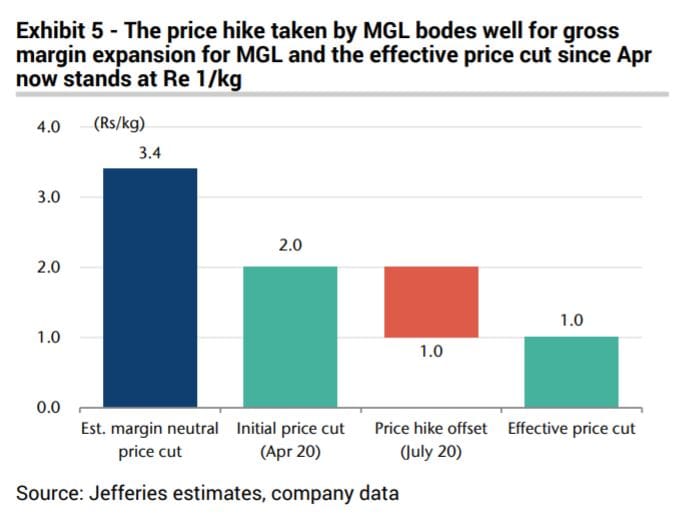 "The net price cut since April now stands at Rs 1/kg vis-a-vis margin neutral price cut of Rs 3.4/kg. Thus gross margin expansion is on track and even if EBITDA margin remains subdued in the near term, the pricing action is unlikely to be rolled back potentially resulting in stronger EBITDA margins as well once volume normalizes keeping us positive on the margin profile," the brokerage report added.

One risk for these two companies remains open access, which can be mitigated  in the near-to-medium term earnings. Jefferies believes that the recovery in volumes amid COVID-19 is faster for GUJGA and MGL.
Tags Gujarat Gas IGL Jefferies Mahanagar Gas oil and gas stocks trending stocks