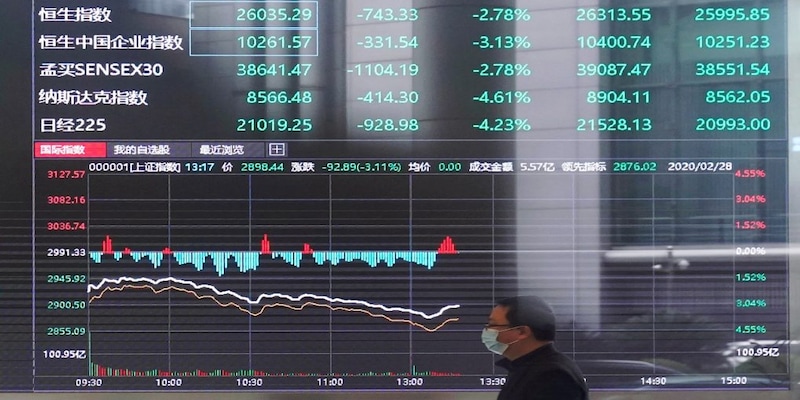 MSCI's broadest index of Asia-Pacific shares outside Japan gave up earlier gains to trade around flat by mid-morning. Japan's Nikkei rose 0.3 percent and Australian shares up about 0.7 percent. The dollar recoiled from near two-decade highs as investors pushed worry about inflation and recession to the back of their minds.

Asia's stock markets struggled to carry recent gains into a fourth straight session on Wednesday and the US dollar steadied, as nagging doubts about inflation and the drag from rate rises crept back into the global growth outlook.

MSCI's broadest index of Asia-Pacific shares outside Japan gave up earlier gains to trade around flat by mid-morning. Japan's Nikkei rose 0.3 percent although miners did help Australian shares up about 0.7 percent. Overnight Wall Street indexes had jumped and the dollar recoiled from near two-decade highs as investors pushed worry about inflation and recession to the back of their minds.
But analysts doubted it could last and by the time Asian traders had woken up US stocks had run out of steam. S&P 500 futures were down 0.2 percent early in the Asia session and Nasdaq futures were down 0.4 percent.
"After plunging into last week, shares could have a further near-term bounce," said Shane Oliver, chief economist and head of investment strategy at Australia's AMP Capital. "But risks around inflation, monetary tightening, the war in Ukraine, and Chinese growth remain high and still point to more downside in share markets," he said.
The dollar also steadied after an overnight kicking, helped by Australian wages data missing forecasts, which pulled down the Aussie dollar. The greenback steadied on the euro at $1.05 and paused a strong bounce for sterling at $1.24. The dollar index hovered at 103.37.
"It's still far too early to call a long-term peak in the dollar and retracements should be shallow," said analysts at Westpac. "But some two-way consolidation between 102-104 is likely near-term," they added, referring to the dollar index.
NEGATIVE SHOCKS
Positive data had helped the short-term mood, with US retail sales meeting forecasts for a solid increase in April and industrial production beating expectations. Data on Wednesday showed Japan's quarterly was smaller than traders had feared.
Shanghai is also edging toward an end to its lockdown and China's vice-premier made soothing comments to tech executives in the latest sign of a let-up in pressure. However, any good news was offset by the reminder from Federal Reserve Chair Jerome Powell that controlling inflation would demand rate rises and possibly some pain.
Investors have priced in 50 basis point US rate hikes in June and July and see the benchmark Fed funds rate nudging 3 percent by early next year.
Treasuries of all tenors were sold overnight in anticipation of rising rates, but the gap in yield between short-dated and long-dated bonds is narrowing as markets price in the risk that the rate hikes this year will drag on longer-run growth. Benchmark 10-year Treasuries were steady in Asia and the yield sat just below 3 percent at 2.98.
European yields are also rising as the likelihood of the European Central Bank hiking rates by 25 basis points around July is firming. Dutch central bank chief Klaas Knot said overnight a bigger rise shouldn't be ruled out.
Commodities have rallied with stocks this week as markets have found reasons to hold outgrowth hopes, but oil dipped overnight and there were signs of waning momentum on Wednesday. Brent crude futures were up 0.3 percent at $112.29 a barrel and US crude futures rose 0.8 percent to $113.35 a barrel. S&P Global Ratings cut growth forecasts for China, the United States, and the eurozone.
"The global economy continues to face an unusually large number of negative shocks," said chief economist Paul F. Gruenwald. "Two developments have altered the macro picture," he said, being Russia's invasion of Ukraine which sent commodity prices spiking, and inflation, which has turned out to be higher, broader, and more persistent than first thought.
Check out our in-depth Market Coverage, Business News & get real-time Stock Market Updates on CNBC-TV18. Also, Watch our channels CNBC-TV18, CNBC Awaaz and CNBC Bajar Live on-the-go!