Shares of ITC are trading near their record high of Rs 367, which it scaled in July 2017.

Foreign Institutional Investors have steadily increased their holdings in FMCG major ITC during the first nine months of 2022.
From 10 percent in December last year, FIIs currently hold nearly 13.5 percent stake in the Hotels-to-FMCG conglomerate, according to its September-quarter shareholding pattern. 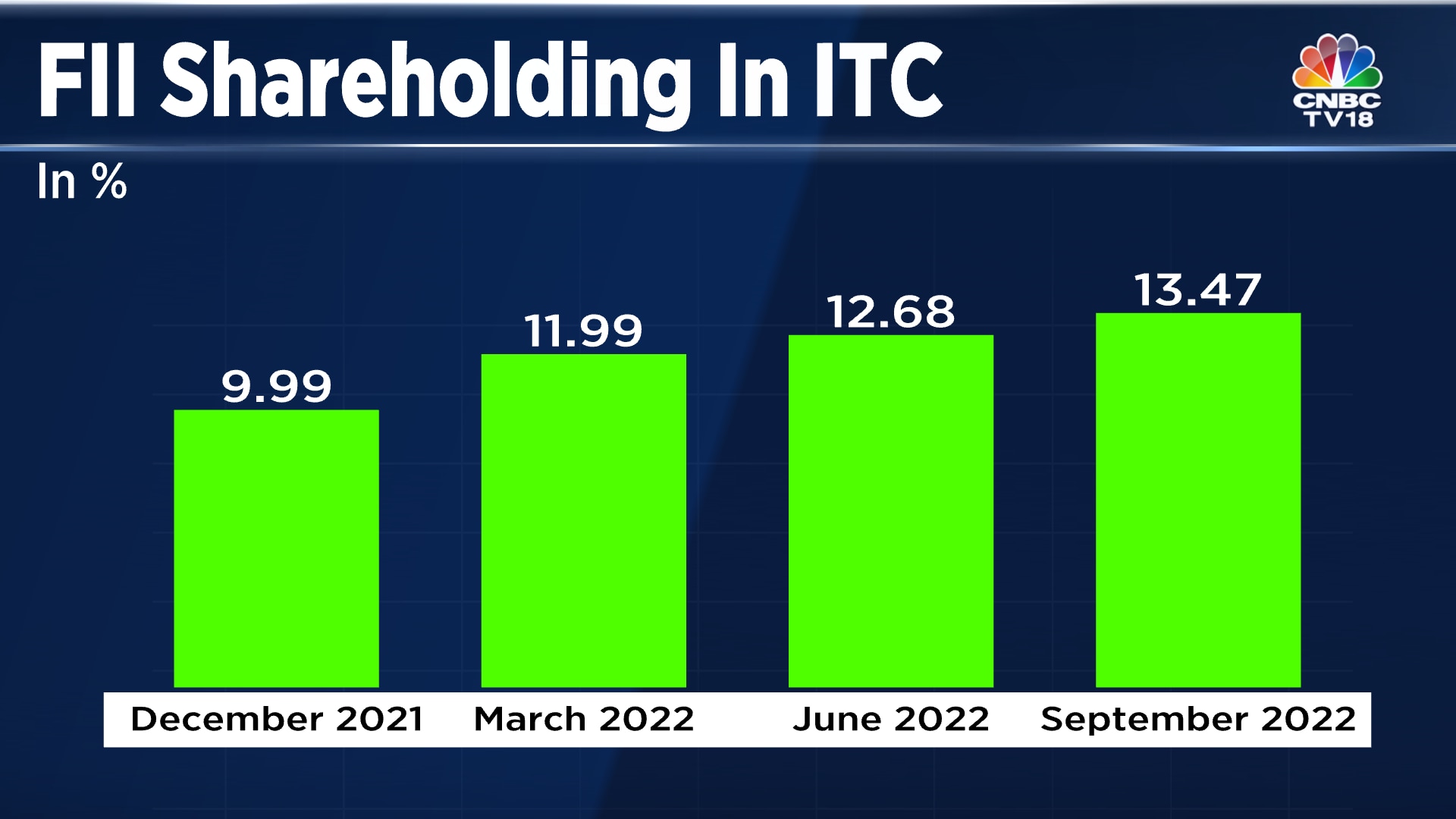 Shares of ITC have gained 65 percent this year so far, making it the company's best annual performance in many years. The stock is trading near its record high of Rs 367 which it scaled in July 2017.
Other shareholders of ITC include the Specified Undertaking of the Unit Trust of India or SUUTI, which has pared its stake in the company over the last few years. As of September 2022, SUUTI holds 7.87 percent stake in ITC, which at the company's current market price, would be valued at Rs 34,140 crore.
SUUTI last pared stake in ITC in February 2017, when 2 percent equity was sold at a price of Rs 291.95 per share. The number of shares that SUUTI has held in ITC has remained consistent over the last four years. 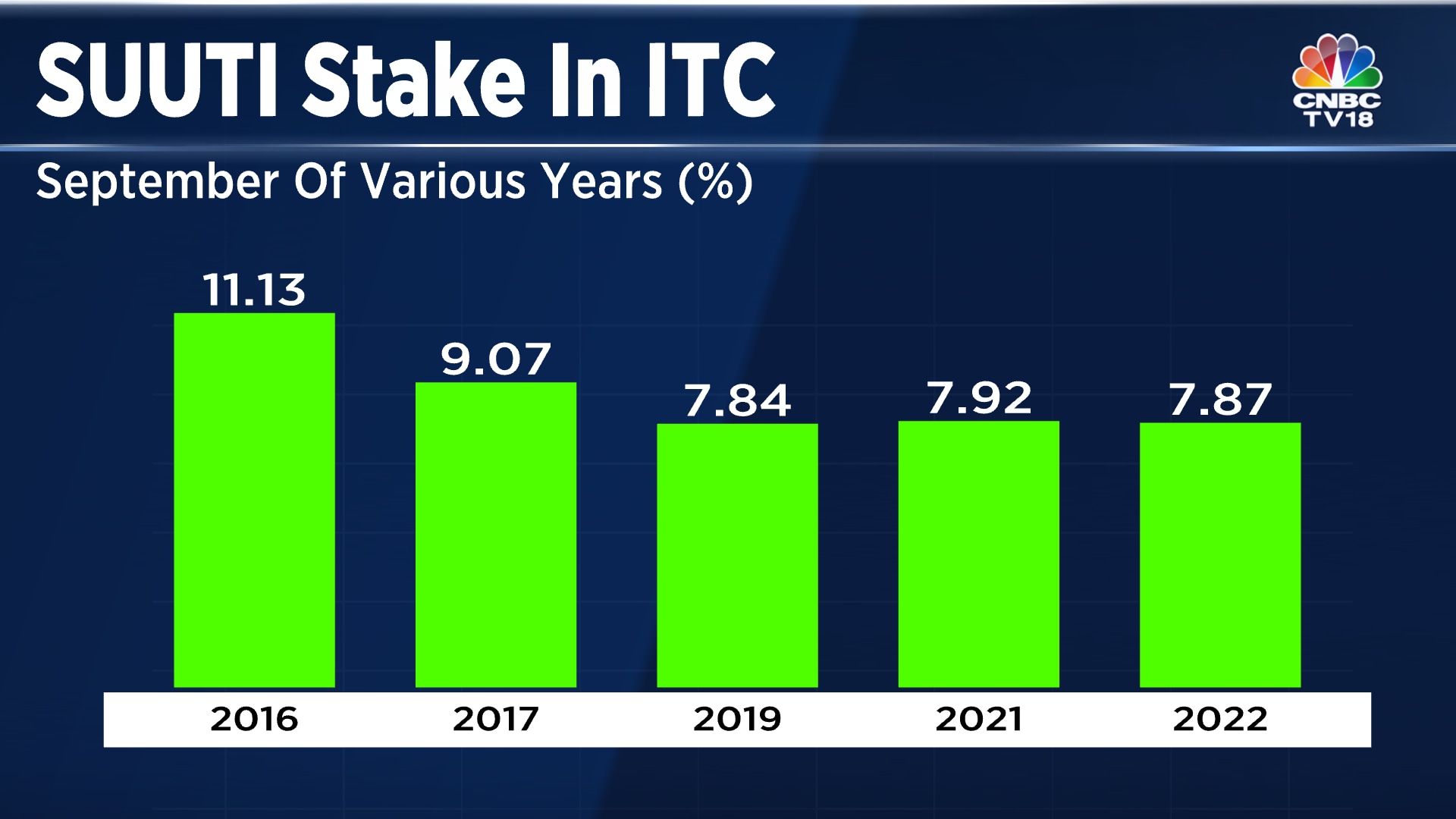 Current shareholders also include British American Tobacco or BAT, which holds 29.2 percent stake in the company through Rothmans International Enterprises, Myddleton Investment Co. and Tobacco Manufacturers (India) Ltd.
Insurance companies also hold 20.7 percent stake in ITC, most of which (15.6 percent) is held by the Life Insurance Corporation of India (LIC).
Other insurance companies that are stakeholders include The Oriental Insurance Co. Ltd., The New India Assurance Co. Ltd., and General Insurance Corporation of India.
Domestic Mutual Funds also own a 9.6 percent stake in ITC.
Incidentally, ITC features among the top ten stocks where Mutual Funds pared their stake in the month of October. Among those who have done so include HDFC Mutual Fund, M&M Mutual Fund, and Shriram Mutual Fund, according to a note from Yes Securities. On the other hand, Quant Mutual Fund, HSBC Mutual Fund and Mirae Mutual Fund increased their stake in the stock during October.
Individuals with net worth less than Rs 2 lakh have an 11.5 percent stake while those in excess of Rs 2 lakh have a 1.33 percent stake in the company.
Shares of ITC have opened 0.7 percent lower on Thursday morning at Rs 358.10.
Also Read: ITC increases stake in D2C brand Mother Sparsh to 22 percent
Check out our in-depth Market Coverage, Business News & get real-time Stock Market Updates on CNBC-TV18. Also, Watch our channels CNBC-TV18, CNBC Awaaz and CNBC Bajar Live on-the-go!