Updated : June 23, 2020 11:34 AM IST
The proclamation comes into effect on June 24 and will expire on December 31.
The Nifty IT index was the only trade in the red. The index fell more than half a percent as against half percent gain in the benchmark Nifty50.

IT shares declined on Tuesday over the proclamation issued by US President Donald Trump to temporarily suspend foreign work visas, including the H-1B. Shares of top Indian software exporting firms such as Wipro, TCS, Infosys, HCL Technologies declined. The Nifty IT index was the only sectoral index trading in the red. The index fell more than half a percent as against half percent gain in the benchmark Nifty50. 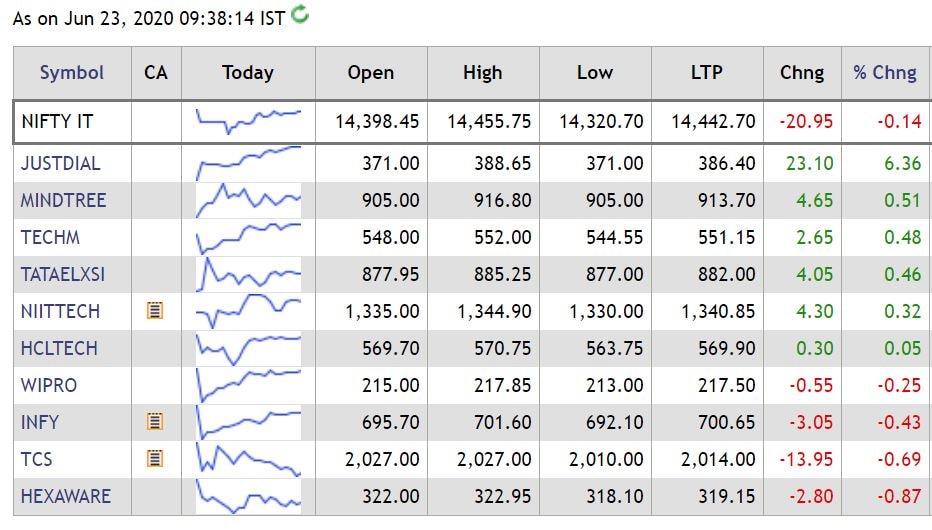 US President Donald Trump issued a proclamation to suspend issuing of H-1B visas, L visas, H-2B seasonal worker visas and J visas for the rest of the year.

The proclamation comes into effect on June 24 and will expire on December 31. Work visas such as H1B and L1 are regularly used by Indian and multinational IT companies to hire Indian employees to work on US contracts in that country.

The move is likely to impact Indian IT companies such as TCS, Infosys, HCL Technologies, Wipro, among others as nearly 70 percent of the 85,000 visas issued each year are to Indians.

TCS and Infosys exposure to H1B visa are at 40-50 percent while Wipro and HCL Technologies at 30-35 percent.

However, analysts believe the move may not impact Indian IT companies more. According to a report, seven of the top ten recipients of H-1B visas in FY19 were US companies.

Morgan Stanley believes that the Indian IT companies are unlikely to feel much of an impact on H-1B visa move.

“No real impact due to localization efforts over past few years. To the extent possible, companies will try to move work offshore,” the global brokerage said.

Sandip Agarwal, Research Analyst-Institutional Equities, Edelweiss Securities, said that the impact will be on people whose contracts expired in April and could not travel to the US due to the lockdown.

“We have a very strong upgrade on the sector. We are going to see a massive bull run in the technology sector over next two-three years because digital transformation, cloud migration will be key themes,” Agarwal said.

Meanwhile, the National Association of Software and Service Companies (NASSCOM), the trade association of Indian companies said that the Trump administration's move to block those entering the country on H-1B visas, L visas, H-2B seasonal worker visas, and J visas, was misguided and harmful to the US economy.

NASSCOM has urged the Trump administration to shorten the duration of these restrictions to 90 days.