This is how IRCTC makes money

This is how IRCTC makes money Even as Indian Railway Catering and Tourism Corporation’s (IRCTC) more than doubled profit and topline growth in the January to March 2022 period following a four-fold revenue boost in the catering business, its share price declined in Tuesday's trade.

Indian Railway Catering and Tourism Corporation (IRCTC) more than doubled its profit and topline growth in the quarter ended March 2022 following a four-fold revenue boost in the catering business. However, it failed to cheer investors on Dalal Street on Tuesday.
IRCTC shares ended a two-day gaining streak and declined more than 2 percent in early deals. At 1:55 pm, it was trading 0.5 percent lower at Rs 691.20 on BSE.
The downtrend in the IRCTC stock comes amid an overall negative trend in Asian markets. In 2022 (year-to-date), investors have lost 19 percent of their wealth in IRCTC’s stock. 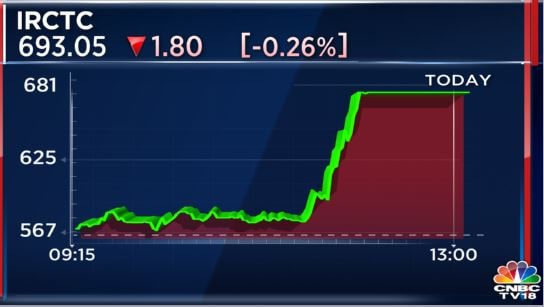 IRCTC’s stellar year-on-year (YoY) business growth is on a low base while quarterly improvement is mild.
While a 4x year-on-year growth in catering revenue remained a key highlight of IRCTC earnings, it must be noted that IRCTC had stopped its catering service in March 2020 owing to the pandemic. It resumed serving fresh meals in 80 percent of its trains only in January this year while ready-to-eat meals were being provided August 2021 onwards. Earlier in February, the PSU resumed serving cooked meals on all trains.
Apart from a 295 percent growth in catering revenue on year, a 38 percent jump in ticketing has led to the total revenue to increase by 104 percent to Rs 690.96 crore, up from Rs 338.78 in the corresponding period a year ago.
IRCTC’s profit after tax (PAT) rose 106 percent to Rs 213.78 crore from Rs 103.78​ crore in the same quarter last year.

The PSU’s overall margin, however, shrunk 2.5 percent and stood at 40.3 percent for the quarter under review. Segment-wise, the ticketing margin widened to 91.5 percent from 81.9 percent earlier while the catering margin stood at 9.4 percent against no base in the previous fiscal.
IRCTC’s earnings before interest, taxes, depreciation, and amortization (EBITDA) jumped 92 percent to Rs 278.53 crore for the quarter under review.
Also Read: What market turmoil? Here are 15 stocks to strike a balance between value and growth
Following the financial results, Vinit Bolinjkar, Head of Research at Ventura Securities, told CNBCTV18.com: “We are already bullish on IRCTC (51.4x FY24 PE) given that increase in ATF prices will lead to rise in air travel prices. IndiGo has raised its ticket prices and others in the pack will follow soon. Thus, railway stocks and travel is expected to benefit.”
According to him, IRCTC is uniquely placed given that it has a monopolistic market with no major competitor and hence any increase in rail travel will lead to an earnings upgrade for the company.
Follow latest stock market updates on CNBCTV18.com's blog here
Check out our in-depth Market Coverage, Business News & get real-time Stock Market Updates on CNBC-TV18. Also, Watch our channels CNBC-TV18, CNBC Awaaz and CNBC Bajar Live on-the-go!