Updated : November 08, 2019 03:06 PM IST
The S&P BSE IPO index has surged 40 percent year-to-date, outperforming the Sensex and the Nifty combined.
In the last one year, the IPO index saw a massive growth of 49 percent. The Sensex and the Nifty50 rose 15 percent and 13 percent, respectively.
IRCTC, which was listed recently on October 14, saw a whopping growth of 175 percent.

Initial public offerings (IPOs) launched this year made generous returns despite the fact that several sectors were severely hit by the economic slowdown and liquidity crisis. Most of the 10 blockbuster IPOs launched this year have delivered more than 25 percent returns year-till-date (YTD).

Besides, the S&P BSE IPO index has surged 40 percent year-to-date, outperforming the Sensex and the Nifty combined — Sensex rose 12 percent while Nifty50 went up 10 percent.

While, in the last one year, the IPO index saw a massive growth of 49 percent. The Sensex and the Nifty50 rose 15 percent and 13 percent, respectively. 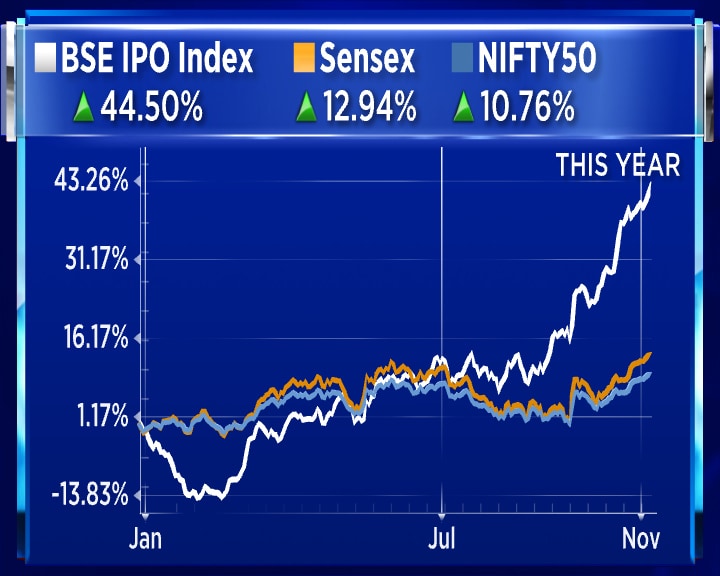 Gaurav Sood, Head of ECM, ICICI Securities said, "2019 has been a very interesting year for IPOs. Investor interest was very strong for IPOs like IndiaMart, Affle, Metropolis, Spandana, Polycab and the recently concluded IPO of IRCTC. As the secondary market performance of these IPOs has been extremely strong, we believe that investors will be open to more IPOs next year."

He further added that July-September remained a volatile period both in India and globally, few IPOs have got pushed to Q4 of FY20 or early FY21. SEBI card also has expired for some of the DRHPs of these companies and these companies will restart the process in the next 3-6 months. There is a strong pipeline of companies looking to file their DRHP with SEBI in Q3FY20 who will aim to hit the markets in either Q4FY20 or Q1 of FY21. A positive budget expectation and new FII allocations to emerging markets especially India should revive the primary markets.

In terms of the stocks listed this year, IRCTC, which was listed recently on October 14, saw a whopping growth of 175 percent. IndiaMART InterMesh remains another good investment from the lot, currently trading 47 percent higher than its listing price. Except for Sterling and Wilson Solar and MSTC, all others have continued to trade higher than their issue prices.

With these stocks performing extremely well, many companies have delayed their plans to list shares this year. However, the flip side is the fact that 2019 has been the worst year for the IPOs in terms of the amount raised through the issues so far.

In the next 6 months, we'll see about 10 major companies hitting the primary markets i.e. Bajaj Energy, PNB MetLife India Insurance, Reliance General Insurance, and Emami Cement along with others. One can expect nearly Rs 30,000 crore to be raised by these companies.

Sood believes that next year will see a strong pipeline of large size IPOs considering the new reforms undertaken by the government. Also, the global markets are becoming more stable. There is definitely appetite for IPOs for companies with distinguished track record of operating and financial performance, backed by strong corporate governance. There is interest in thematic sectors like technology, consumer, high-quality BFSI companies.

Also, there will be an appetite for QIPs (primary fundraise into the company) in the primary market. It is clear that besides strong financials and operating performance, investors are willing to pay a premium to high-quality companies, he added.
Tags IndiaMART initial public offerings IPO performance ipo this year IPOs IRCTC Markets nifty primary market public offer SEBI sensex Stock market Stocks