Infosys results: Infosys — India's second largest software exporter by market value — reported a 6.8 percent sequential rise in revenue for the April-June period. In a big surprise for investors, the Bengaluru-based IT giant raised its revenue growth guidance to 14-16 percent from 13-15 percent for the year ending March 2023.

Infosys on Sunday reported a 6.8 percent increase in revenue for the April-June period compared with the previous three months, exceeding Street estimates. In a big surprise for investors, the Bengaluru-based IT giant raised its revenue growth guidance to 14-16 percent from 13-15 percent for the year ending March 2023. 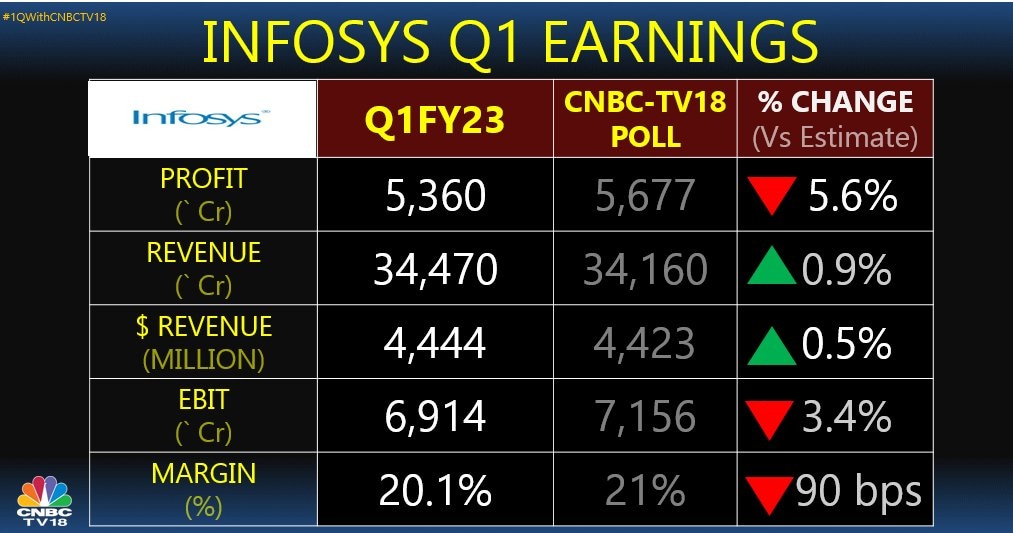 The financial results of Infosys come at a time when elevated levels of attrition leading to higher employee costs are denting the profitability of IT companies, despite rising spending on technology across sectors.
Infosys — India's second largest software exporter by market value — posted a 5.7 percent sequential decline in net profit to Rs 5,360 crore for the three month period, falling short of Street expectations.
Analysts in a CNBC-TV18 poll had estimated the IT giant's quarterly net profit at Rs 5,677 crore and revenue at Rs 34,160 crore. Revenue in dollars came in at $4,444 million, up 3.8 percent on a quarter-on-quarter basis and ahead of analysts' expectation of 3.3 percent growth, according to a regulatory filing.
Its growth in revenue in constant currency terms — or revenue excluding the impact of forex fluctuations — came in at 5.5 percent on quarter, better than Street estimates as well as its peers. Analysts in the CNBC-TV18 poll had estimated revenue growth at 4.5-4.7 percent.
ALSO READ: TCS kicks off earnings season | Wipro profit down 21% | HCL profit up 2.4%
“Our strong overall performance in Q1 (April-June) amidst an uncertain economic environment is a testament to our innate resilience as an organisation, our industry-leading digital capabilities and continued client-relevance. We continue to gain market share and see a significant pipeline driven by our Cobalt cloud capabilities and differentiated digital value proposition," said Salil Parekh, CEO and Managing Director, Infosys.
“We are investing in rapid talent expansion while ensuring rewarding careers for our employees, to better serve evolving market opportunities. This has resulted in a strong performance in Q1 and the increase in FY23 revenue guidance,” he added.
Attrition at Infosys worsened to 28.4 percent in the three months to June from 27.7 percent in the previous quarter.
“We are fueling the strong growth momentum with strategic investments in talent through hiring and competitive compensation revisions. While this will impact margins in the immediate term, it is expected to reduce attrition levels and position us well for future growth. We continue to optimise various cost levers to drive efficiency in operations”, said Nilanjan Roy, CFO, Infosys.
Infosys reported an EBIT margin — a key metric of profitability determining a company's operating profit as a percentage of revenue — of 20.1 percent, down 140 basis points compared with the previous quarter. Analysts had pegged the company's margin at 21 percent.
Infosys maintained its margin guidance for the year ending March 2023 at 21-23 percent.
ALSO READ: What Wipro is doing right to ease attrition issues
The total number of Infosys' active clients increased 2.1 percent to 1,778 in the April-June period compared with the previous quarter, according to the filing.
The total contract value of large deal wins came down to $1.7 billion in the quarter ended June, from $2.3 billion in the January-March period. The company added five clients in the $50 million-plus category during the quarter.
"The deal pipeline is below expectations. We are expecting at least similar kind of deal wins like Q4... I believe there would not be much downgrade in the earnings per share (EPS). It would be marginal," said Ashis Dash, IT Research Analyst at Sharekhan.
"Infosys remains our top pick in the largecap space and they have reported industry-leading growth," he said.
Infosys shares ended 1.7 percent lower at Rs 1,506.3 apiece on BSE on Friday, ahead of the earnings announcement. The stock, however, clocked a weekly gain. 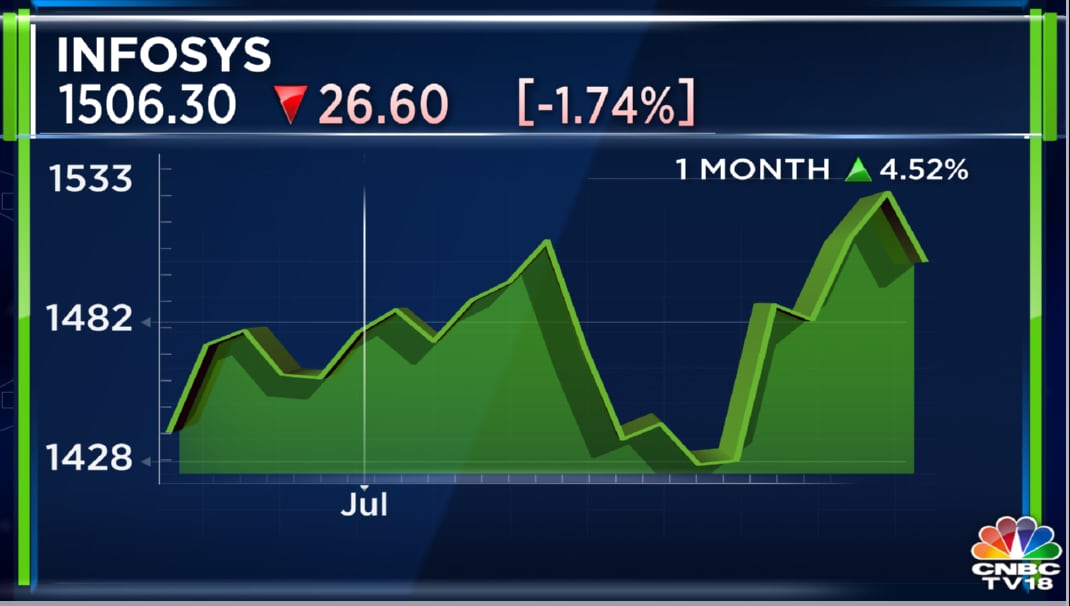