Funds raised by Indian IPOs fell to just $2.8 billion this year, the lowest in four years.

Indian initial public offerings (IPO) tumbled to a 4-year low by value in 2019 as the economy slowed, but some analysts are hoping for better in 2020 on the back of potential government reforms likely to boost stock markets.

Funds raised by Indian IPOs fell to just $2.8 billion this year, the lowest in four years, according to data from Refinitiv. In 2017, the proceeds hit a record $11.7 billion before falling to $5.5 billion in 2018. 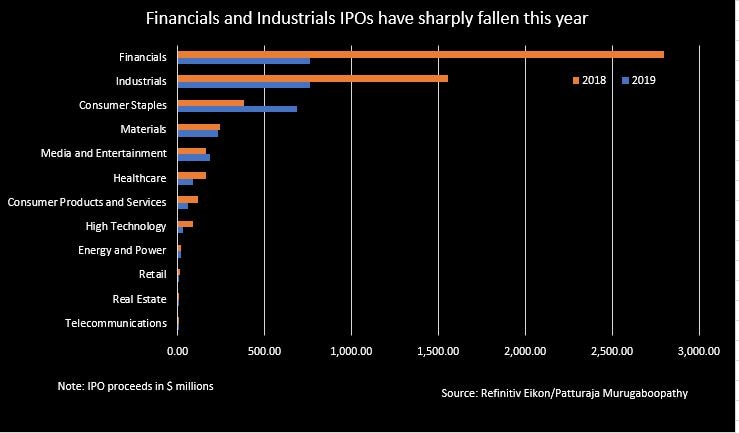 “2019 has been the worst year from an IPO market perspective,” said Sandip Khetan, a partner at consultancy EY.
“Because of different types of disruptions, such as corporate failures and bankruptcies, things have slowed down considerably,” he said.
Financials and industrial sectors led the declines in IPO issues, with proceeds more than halving. India's NSE Nifty 50 index was down about 1.4 percent for the year on September 19, a day before the announcement of a cut in the corporate tax rate boosted markets and raised hopes of more reforms to help the economy.
The NSE index was up 12.4 percent in 2019 as of Tuesday’s close.
“The government has addressed a lot of economic reform requirements in the last three months,” said EY’s Khetan.
At the same time, many of this year’s IPOs have performed well, boosting the outlook for more issues next year.
Shares of Indian Railway Catering and Tourism Corp Ltd, marketing and advertising firm Affle (India), and e-commerce company Indiamart Intermesh have doubled in value from their issues prices.
The S&P BSE IPO index, which measures the performance of companies listed at the Bombay Stock Exchange after the completion of their IPOs, has surged 34 percent this year, outperforming broader indexes such as NSE Nifty 50 and BSE Sensex.
Check out our in-depth Market Coverage, Business News & get real-time Stock Market Updates on CNBC-TV18. Also, Watch our channels CNBC-TV18, CNBC Awaaz and CNBC Bajar Live on-the-go!