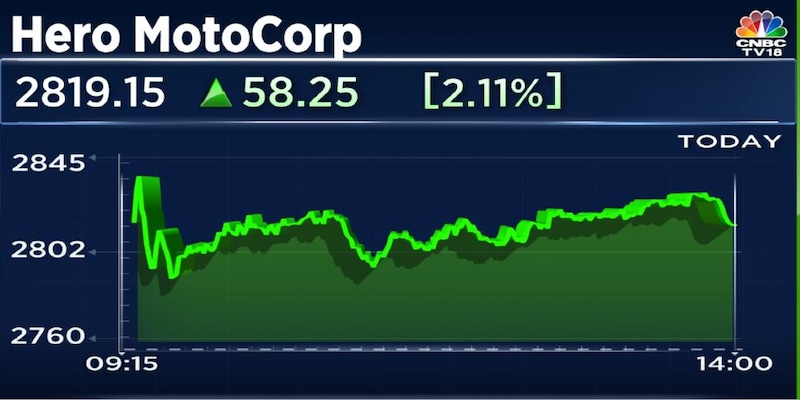 Hero MotoCorp stock prices surged in trade on Tuesday after the two-wheeler firm's strong Q1FY23 results further improved the sentiment in the auto stock ahead of the festive season and inflationary and supply side woes seemed to ease.

Hero MotoCorp shares gained 3 percent in trade on Tuesday aided by strong results in the April-June quarter despite higher input costs and supply side pressures. Hero MotoCorp's earnings, however, were below Street estimates.

At 2 pm, Hero MotoCorp shares were trading at Rs 2,827, up 2.4 percent on BSE, and a little over 4 percent away from its 52-week high price of Rs 2,952.6. Hero MotoCorp shares were trading above their short and medium-term day-moving averages.
Meanwhile, the auto sector gauge, the Nifty Auto index, hit an all-time high of 13,182.10 in trade today, boosted by Hero Moto, Maruti Suzuki, Eicher Motors, Mahindra & Mahindra as crude oil prices declined.
Also Read: Hero MotoCorp posts 71% rise in profit on higher 2-wheeler sales
Hero MotoCorp's consolidated net profit came in at Rs 586 crore in the June quarter, rising almost 129 year-on-year. However, it came in below a CNBC-TV18 poll estimate of Rs 771 crore. 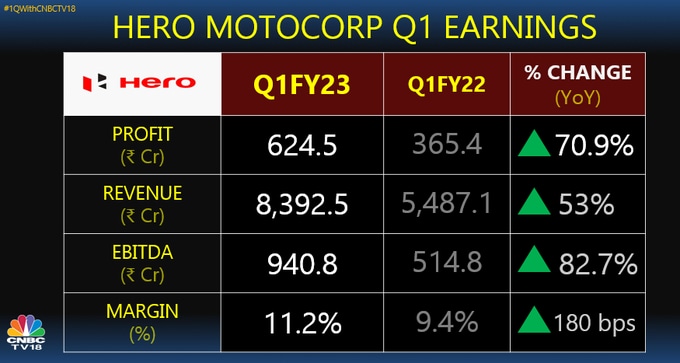 Revenue from operations came in at Rs 8,392.5 crore, rising 53 percent boosted by a low base. The CNBC-TV18 poll had estimated the revenue to come in at Rs 8,593 crore.
The operating margin expanded to 11.2 percent for the April-June quarter despite a sharp surge in material costs due to commodity headwinds.
Market expert Prakash Diwan said, "It's a company that actually has a lot of challenges in terms of the raw material (RM) cost pressures, they've not taken as many hikes as some of the other guys have. And they've still been able to maintain that margins and the growth of 14 percent on the EBITDA, I think in the current circumstances, that offers a very good opportunity for scale."
Hero Moto's management also sounded confident as the country enters the festive season.
"As the country enters the festive season, we expect the 2-wheeler demand to be on a healthy trajectory supported by micro factors like a normal monsoon, crop cycle, the opening of all sectors of the economy etc. The margin pressure on the industry is also likely to ease in coming quarters, as commodities cool off and price recovery moves ahead of cost impact," Niranjan Gupta, Chief Financial Officer (CFO), Hero MotoCorp, said in an exchange filing.
Check out our in-depth Market Coverage, Business News & get real-time Stock Market Updates on CNBC-TV18. Also, Watch our channels CNBC-TV18, CNBC Awaaz and CNBC Bajar Live on-the-go!