Godrej Consumer Products’ share price declined for the second straight day on Friday, a day after the company reported a weak performance for the January to March 2022 period, missing Street estimates.

Godrej Consumer Products’ share price declined for the second straight day on Friday, a day after the company reported a weak performance for the January to March 2022 period, missing Street estimates as inflationary pressure led the firm’s margin to slip even more than expected.

Godrej Consumer stock fell more than 5 percent in intraday trade and ended 4.4 percent lower at Rs 760 on the BSE.
Except for a 6 percent year-on-year (YoY) rise in revenue for the quarter ended March 2022, the fast-moving consumer goods (FMCG) company failed to meet Street expectations on all fronts — profit, margin, and EBITDA. Godrej Consumer Products’ net sales rose to Rs 2,915.82 crore, up 6.78 percent from March 2021. Total expenses were higher at Rs 2,535.06 crore than Rs 2,259.12 crore in the same period a year ago.
While the company was expected to deliver a flat margin, the parameter fell from 20 percent in the March quarter last year to 16 percent this time, as inflation concerns hit the sector leading to price hikes.
Godrej Consumer said the April to June quarter of 2022 will be difficult due to margin pressure but will likely improve over the next few quarters. 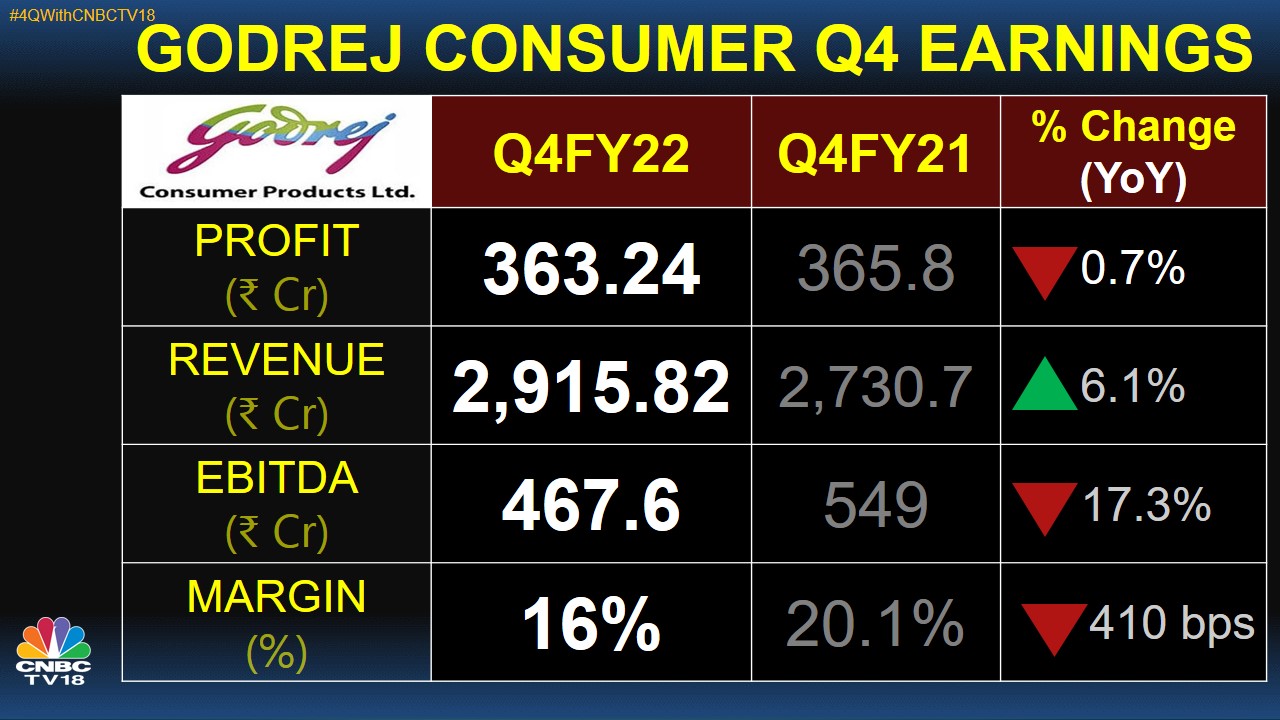 “The last quarter of FY22 had a few exceptional hits in terms of margins, which may not continue in the first quarter of FY23. On the other hand, commodity prices in the first quarter are significantly higher than they were, at least in terms of consumption. So, I don't know exactly where we landed up in the first quarter, but I can tell you that it won't be an easy quarter, certainly in terms of margins,” the firm’s MD & CEO Sudhir Sitapati told CNBC-TV18.
However, overall, the firm is bullish about the Indian market for FY23 as it is witnessing green shoots in demand. “I don't think the next quarter or this quarter will be terrific, but when I look at fundamentals and the way things are shaping up, I am reasonably bullish about FY23,” Sitapati added.
The company, however, is concerned about the Indonesian market and sees better growth in the second half of the financial year.
Follow latest stock market updates on CNBCTV18.com’s blog here
Check out our in-depth Market Coverage, Business News & get real-time Stock Market Updates on CNBC-TV18. Also, Watch our channels CNBC-TV18, CNBC Awaaz and CNBC Bajar Live on-the-go!