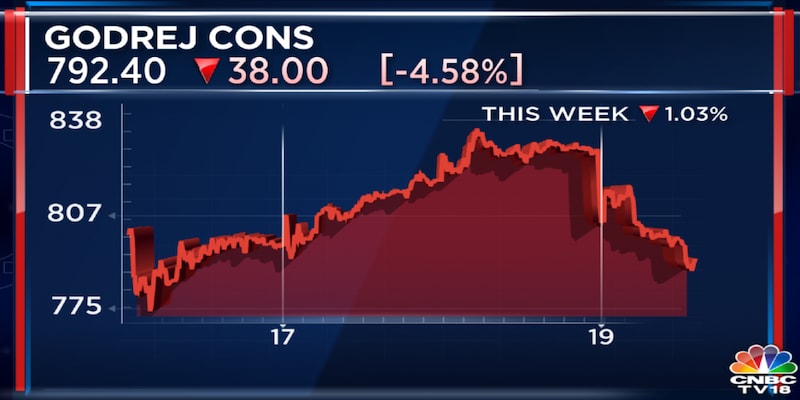 Even as Godrej Consumer Product is looking to register double-digital sales growth in India and some other regions, a CNBC-TV18 poll of analysts expects the FMCG firm to report revenue growth of 6 percent and margin to remain flat. The company's stock fell ahead of the earnings announcement.

Shares of Godrej Consumer Products declined in Thursday’s session as Street is expecting the fast-moving consumer goods (FMCG) company’s margin to be flat in the fourth quarter of the 2021 fiscal though revenue is likely to increase on the back of price hikes.
After rising for four straight sessions, Godrej Consumer consumer shares slipped more than 5 percent during the day hitting an intraday low of Rs 786.20.
At 1:15 pm, the stock was trading at Rs 790.30, down 4.7 percent from its previous close.
A CNBC-TV18 poll of analysts has predicted its revenue to increase by 6 percent to Rs 2,895 crore in the March quarter, Godrej Consumer Products said it hopes to register double-digit sales growth in India following price hikes it implemented in November 2021.
The company’s chief financial officer Sameer Shah had in November said, the firm would take a 10-11 percent price increase for the rest of the year.
While it expects double digital sales growth in India and Latin America, the firm sees a sales decline in the high teens in Indonesia, according to a company update.
Also Read: ITC only Sensex stock in green after shares hit 3-year high; cigarette revenue growth impresses Street
“In India, we expect to deliver close to double-digit sales growth, driven entirely by pricing. Our 2-year CAGR would be in early twenties. We witnessed a mixed performance in our Personal Care and Home Care categories. Personal Care sustained its double-digit growth trajectory, primarily led by pricing in Personal Wash. Home Care witnessed a soft performance on a high base, impacted by a relatively muted season for Home Insecticides and the discretionary nature of Air Fresheners,” the firm said in an update.
The Street, meanwhile, has projected the FMCG company's profit to rise by nearly 5 percent to Rs 384 crore while the margin is likely to remain flat at 19 percent as against 20.1 percent in the same quarter last year. Godrej consumer in its update said, “Some of our short term challenges such as unprecedented global commodity inflation and the performance of our Indonesia business, continued to play out during the quarter, impacting consumption and margins.”
Also Read | Crude oil prices below $110 on fall in global equity markets, inflation, and growth concerns
It added that the FMCG industry witnessed a consumption slowdown over the last few months. The sector continued to be hit hard by higher inflation levels, leading to successive price increases, and impacting volumes, according to the company update.
Follow the latest stock market updates on CNBCTV18.com’s blog here
Check out our in-depth Market Coverage, Business News & get real-time Stock Market Updates on CNBC-TV18. Also, Watch our channels CNBC-TV18, CNBC Awaaz and CNBC Bajar Live on-the-go!