Updated : March 25, 2019 01:54 PM IST
While the frontline indices gained during the year, mid- and small-caps still underperformed the indices
The broader markets, however, showed signs of recovery in the final quarter of the year but remained in red for FY19.

While the frontline indices gained during the year, mid and small-caps still underperformed the indices. The broader markets, however, showed signs of recovery in the final quarter of the year but remained in red for FY19.

Analysts feel global economic slowdown, corporate earnings, rupee, FII inflows, and the coming Lok Sabha elections will impact the investor sentiment in the coming future, but they continue to feel that the Indian markets are overvalued.

"Nifty earnings per share estimates have been sharply reduced yet again this year for the fourth year in a row and now everyone is looking at FY20 with anticipation of a 20 percent rise. To that extent, markets are slightly overvalued – however, the onset of monsoons, the return  of a Modi led strong government, the continued growth in the US economy, a fiscal stimulus led to return to recovery in China all will have a role to play this year," said Sandip Raichura, Head of Retail, Prabhudas Lilladher.

"Crude prices remaining in a range and continuing low inflation can, in the midst of supportive global tailwinds, indeed power Nifty to even higher levels after years of disappointing growth in corporate profits," he added.

Data-wise, the S&P BSE Sensex gained 16 percent till date in FY19, while the NSE's broader Nifty50 index gained 13 percent in the given period. At the same time, the S&P BSE Midcap and Smallcap indices tanked 4.5 percent and 12 percent, respectively.

Among BSE 500 stocks, 14 stocks gave over 50 percent returns, while over 100 stocks gave double-digit returns this financial year. OUt of which, Merck was the top performer with 124 percent rise, followed by AstraZeneca Pharma (up 111 percent), Adani Power (up 103 percent), Bata India (up 86 percent), and Vinati Organics (up 81 percent).

Other gainers on the index included InfoEdge India, Divi's Labs, Suven Life Sciences and Muthoot Finance, up in the range of 53-60 percent.

Among Nifty50 stocks, Bajaj Finance rose the most, over 60 percent followed by Axis Bank, Reliance Industries, TCS and ICICI Bank. 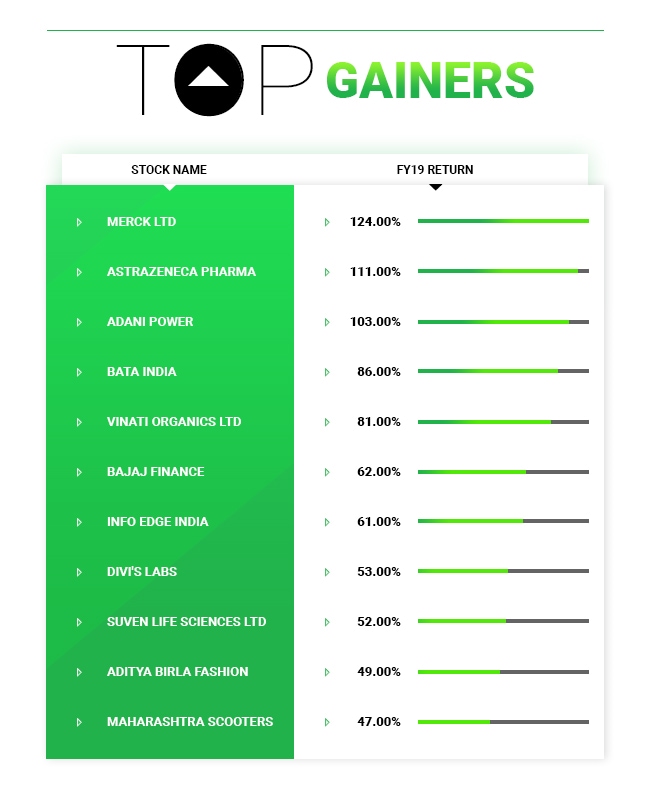 Talking of losers, over 340 stocks in the pack gave negative returns. Reliance Communications tanked the most, crashing 76 percent followed by Shankara Building (down 75 percent), PC Jeweller (down 75 percent), Dewan Housing (down 74 percent) and Rain Industries (down 73 percent).

Looking ahead, Raichura believes that there will be heightened volatility around elections and till the results are out, markets may see bouts of sharp corrections but from a fundamental perspective, the indices seem evenly poised. 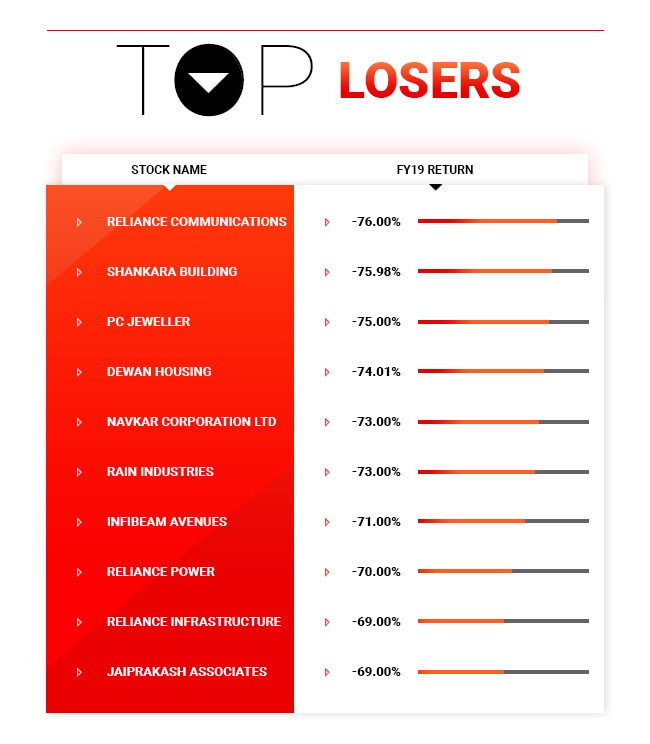