India has outperformed other emerging markets in terms of inflows from foreign portfolio investors (FPI). The FPI equity inflows in August 2020 so far stands at $6 billion mark.

Analysts believe that the recent share sale by many listed companies and reducing interest rates have attracted the foreign investors’ money into Indian equities. 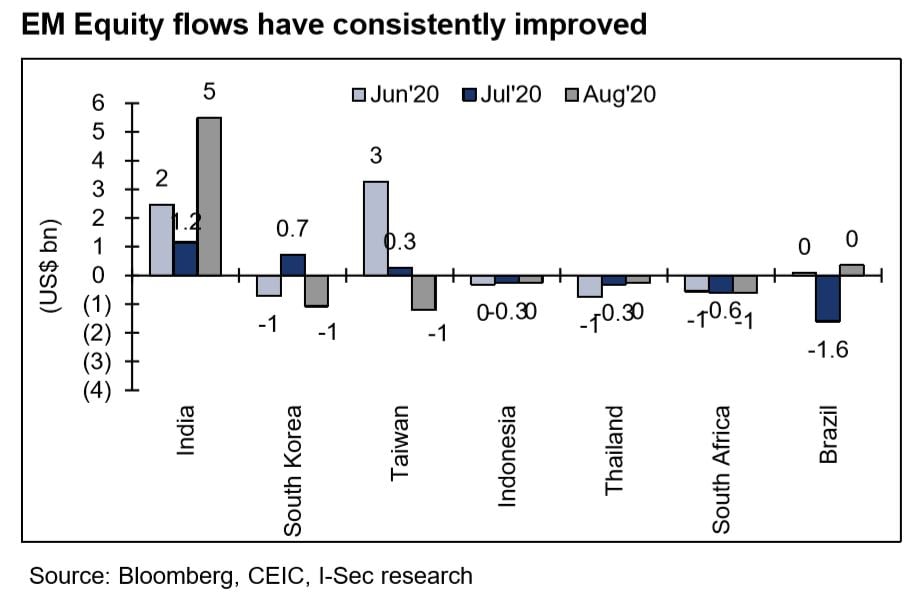 The Reserve Bank of India (RBI) has been buying excess dollar inflows to avoid sharp movements in the INR resulting in Forex reserves hitting $535 billion. This has resulted in improving INR liquidity which continues to be at a significant surplus of Rs 6.5 lakh crore.

“Bullish environment to continue and has the potential to swing the market from extreme bearishness in March 2020 into bubble territory (NIFTY50 at above +1 s.d. on forward P/E, CAPE at +0.7 s.d. and bond yield exceed earning yield by 120 bps) as momentum in stocks could spread to broader markets hinging on the hope of an economic revival in H2FY21,” ICICI Securities said in a report.

Meanwhile, market cap to GDP (76.5 percent) and NIFTY50 P/B (2.8x) are still comfortable at below LTA although they reflect poor fundamentals of close to two-decade low listed space PAT/ GDP of around 2 percent and below value creating RoE of 12 percent for the NIFTY50 currently, the report added.

What could be the key risks to the FPI inflows into the domestic market going ahead can be a slower recovery in India’s economy and surging COVID-19 cases. Sluggish economic activity continuing in H2FY21 could temper expectations.

Additionally, round one of liquidity easing by US Federal Reserve may be nearing its end and the initial aggressiveness shown by global central banks may not be visible in the near future.