Four consumer durable stocks to bet on for the long term

Consumer durable companies ended FY18 on a strong note. Increasing spending capabilities of the middle class and India’s rural population resulted in an increasing array of products finding their way from showrooms to newer homes. The consumer durable market offers immense growth potential as penetration levels of even the most basic electronic goods are in low double-digits. Below are four consumer durable players which could help investors take advantage of this consumption theme.

V-Guard Industries reported a topline growth of 11 percent in FY18 on strong volume growth in switchgear and kitchen appliances. Adjusted operating margin contracted even as the management undertook price hikes in the southern market to mitigate input cost pressures. It incurred a one-time marketing expense of Rs 36 crore in the fourth quarter as part of its brand rejuvenation exercise.

Crompton Greaves Consumer Electricals’ (CGCE) FY18 revenue rose 5 percent YoY to Rs 4,080 crore aided by double-digit sales growth in the lighting and fixtures segment. Its Q4 performance was particularly strong as it reported an 8 percent topline growth and an expansion in operating margin on account of richer revenue mix and operating efficiencies. 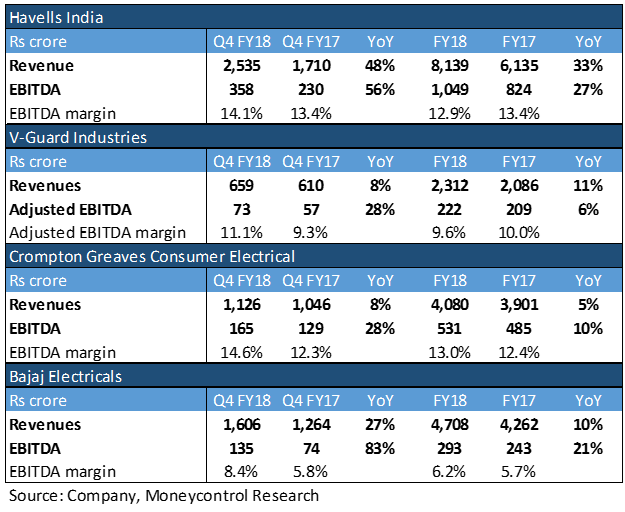 The management is trying to reposition Lloyd Electric s as a premium brand within the same customer segment through brand development and distribution. It has also tied-up with modern retail stores (Reliance Retail and Croma) to increase its market presence. As part of its expansion strategy, the company plans to add refrigerators under Lloyd’s portfolio, which currently consists of air-conditioners, washing machines and televisions.

V-Guard’s revenue growth was driven by strong performance in all product categories. Growth in the electronics segment was led by UPS (uninterruptible power supply) while switchgear led the same in the electrical segment. Kitchen appliances and fans drove uptick in CDs. The management is eyeing broad-based growth, diversifying its geographic presence and making inroads in the non-southern markets by expanding its distributor and retailer network. Revenues from non-south markets grew 20 percent YoY (compared to a YoY growth of just 5 percent from the southern market) and contributed around 40 percent of topline.

The company has initiated a brand transformation exercise to position itself as a leading multi-product, all-India manufacturer of consumer electricals. The management expects the new brand identity to help increase its visibility in non-south markets and improve sales in the south as well. A campaign has been launched with the introduction of 3-4 new products like smart fans, water heater, stabiliser and inverter. It also plans to introduce modular switches, air-coolers and smart ceiling fans across geographies.

BEL’s CD business showed signs of a recovery in Q4, although the segment reported a decline of 4 percent for FY18. In the past 2-3 years, it lost market share in the appliances category. The management expects the same to recover in FY19 and deliver 10-12 percent growth as it plans to expand its range and reach as well as change its distribution model.

Growth in BEL’s engineering business was driven by strong project execution. Performance is expected to remain strong given its order book of Rs 9,000 crore (around 4 times sales).

CGCE’s lighting and fixtures segment grew 12 percent in FY18 on strong demand in both B2C and B2B verticals. The management is working on some premium LED products with value-added benefits in the lighting segment. Product development is underway and is expected to be rolled out in 2018.

The company was the first to introduce an ‘anti-dust’ fan in the market one-and-a-half year back. The product was well received by the market. It has garnered sales worth Rs 200 crore from its anti-dust fan, making it the single largest selling innovation in the market. Riding on the success of these new innovative products, its market share in the domestic fan market has increased to about 27 percent from 23-24 percent 2-3 years back.

The company is targeting retail expansion by implementing a go-to-market (GTM) strategy on a regional basis. While its GTM strategy has been successfully implemented across south and west India, it continues to face challenges in the north, which has impacted its sales and led to inventory destocking in FY18.

Outlook and recommendationCD penetration is set to rise as the Centre is targeting complete electrification of the country through the launch of Saubhagya Scheme in September last year. As per a Care Ratings report on the power sector, of the 3.79 crore un-electrified households, 16 percent households have been electrified at the end of May. The remainder are being targeted for completion by year-end. Pan India electrification along with affordable housing projects and rising income levels will aid sector growth. 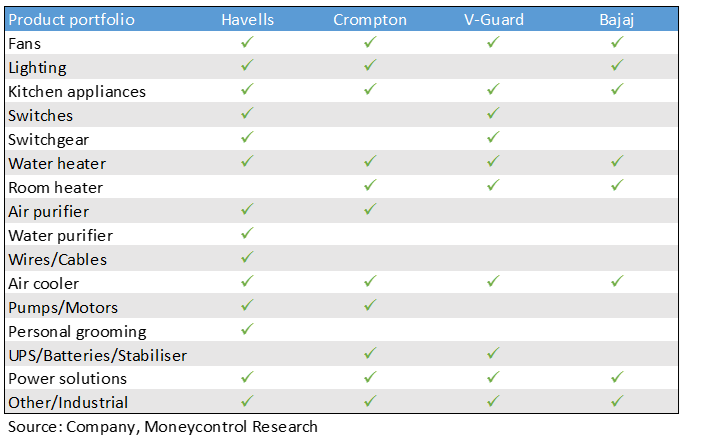 Among the four companies, we prefer Havells and CGCE from a product portfolio and positioning perspective as we remain confident on the execution capabilities of both companies. BEL’s CD business is still in recovery mode and therefore trades at a discount to other peers. Incremental growth in V-Guard will primarily be driven by newer geographies and product categories, hence business execution needs to be monitored closely.

Over the past couple of years, Havells has gained a strong foothold in the sector with the launch of new products. The company seems well positioned to benefit from product premiumisation and penetration. In the medium term, it also stands to benefit from repositioning of the Lloyd Electric brand.

CGCE is continuously working on product innovation, diversification and premiumisation and is also gaining market share across segments and products. It has a strong product portfolio, healthy return ratios and remains well positioned to grow in an improving demand environment.

However, both companies are trading at rich valuations (more than 30 times FY20 earnings). We advise long term risk-averse investors to use any market correction to slowly build positions in these stocks.