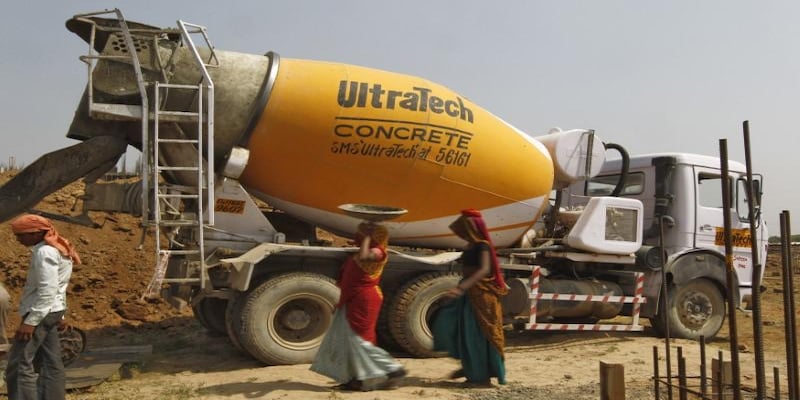 Brokerage houses remained positive on the stock and raised their target price for the cement maker post the Q2 earnings.

UltraTech Cement reported a 113 percent increase in consolidated net profit in the September quarter when compared to the same period last fiscal, to Rs 1,235 crore mainly due to the sale of its Chinese subsidiary. Its net profit in the year-ago quarter was at Rs 579 crore.

In its press release, the company said, "The company's strong quarterly performance is on the back of operational efficiencies and its ability to serve all Indian markets."
Its revenue was also up 7.7 percent at Rs 10,354 crore as compared to Rs 9,615 crore in the corresponding quarter last year.
"UltraTech Nathdwara Cement (UNCL) through its subsidiary, Krishna Holdings, a company incorporated in Singapore has completed the divestment of its entire equity shareholding of 92.5 percent in its cement subsidiary at a net consideration of $94.70 million. Further, in respect of another step-down subsidiary of UNCL which is held for sale, the company has evaluated the carrying value based on an independent valuation report and recorded a net gain of Rs 359.87 crores on sale/remeasurement of discontinued operations," the company said in a statement.
The cement manufacturer expects demand for cement to grow on the back of the government's thrust on infrastructure and the expanding rural economy.
Brokerage houses remained positive on the stock and raised their target price for the cement maker post the Q2 earnings.
CLSA raised its target to Rs 5,600 from Rs 5,000 earlier. It added that strong performance on all parameters drives a 30 percent EBITDA beat for the firm.
"While higher volume and profitability are likely to drive EBITDA, the benefits of financial leverage will boost its EPS and returns. Deleveraging also remains on track," noted the brokerage. It also sees risk-reward as attractive and maintains a 'buy' rating.
Meanwhile, Nomura also raised the stock's target price to Rs 6,100 and maintained a 'buy' rating on the stock. The company reported strong performance and stronger commentary and it sees a broad-based demand recovery. It also raised FY21 core EBITDA estimates by 33 percent.
Jefferies also maintained a 'buy' rating and raised the target price to Rs 5,600 from Rs 5,150. The volume growth was ahead of the estimate while market mix arrested QoQ fall in realization.
The unit EBITDA at over Rs 1,300/t is also quite strong, while healthy profitability and focus on capex/working capital helped to reduce debt, it added. The commentary was fairly positive and the brokerage raised its EPS estimates by 5-30 percent.
Morgan Stanley has kept an overweight rating with a target at Rs 4,870. There is a possibility of re-rating due to broad-based volume recovery. The profitability remains strong while deleveraging is positive too.
Check out our in-depth Market Coverage, Business News & get real-time Stock Market Updates on CNBC-TV18. Also, Watch our channels CNBC-TV18, CNBC Awaaz and CNBC Bajar Live on-the-go!