Market Highlights: Indian shares ended Thursday’s trade sharply lower, dragged by a heavy sell-off in banking and energy stocks amid incessant foreign fund outflows. The 30-share index ended 470.41 points, or 1.29 percent, lower at 36,093.47. Similarly, the broader NSE Nifty plunged 135.85 points, or 1.25 percent, to settle at 10,704.80. Shares of Yes Bank tanked over 15.52 percent after a Moody's report said Altico default may be credit negative for banks given their significant exposure to the real estate sector. Here are the main highlights from the stock markets today:

Indian shares ended Wednesday's trade sharply lower dragged by bluechips ICICI Bank, Reliance Industries, Infosys and Tata Consultancy Services. The Nifty ended just above 10700, while the Sensex dropped over 470 points. At close, the Sensex was down 470.41 points at 36,093.47, while Nifty was down 135.90 points at 10,704.80. Yes Bank, Zee Entertainment, Tata Steel, IndusInd Bank and ICICI Bank were among major losers on the Nifty, while gainers include Tata Motors, UPL, Bharti Airtel, Coal India and HDFC Bank. All the sectoral indices ended in the red with metal, pharma, bank, auto, energy, IT and infra declining the most.

National Aluminium Company Ltd on  Wednesday announced a record 115 percent dividend payout amounting to Rs 1072.73 crore for 2018-19. This is the highest dividend payout since the inception of the Company in 1981 which works out to Rs 5.75 per share of Rs 5 each, the company said in a statement. Dividend including the applicable dividend distribution tax works out to a payout of 74.65 percent of the PAT against 98.81 percent of the previous financial year. Till 2018-19 fiscal, Rs 32,886 crore was paid towards taxes, duties, royalties and dividend. Out of this, Rs 25,917 crore was paid to the Central Government and Rs 6,969 crore to the state government, it said. READ MORE

Manish Gunwani, chief investment officer of equity investments at Reliance Nippon Life AMC, is not surprised that Nifty is not outperforming the midcaps anymore and expects that to continue broadly, he said in an interview with CNBC-TV18.

“Fundamentally, our belief since last 2-3 months has been that the midcap underperformance to our mind from a fundamental sense is over. So from a 2-3 year perspective we do not expect the midcap index to trail Nifty at these kind of valuations,” he said, adding that looking at midcap stocks from bottom-up basis, even the stocks that are not cyclical and have got steady earnings the price to book is quite attractive versus a lot of largecap companies. READ MORE

HDFC Bank vs ICICI Bank: Will stock split make India's largest private bank more attractive?
The HDFC Bank had last split its shares in 2011 in a ratio of 1:5, or one share of Rs 10 split into five shares of Rs 2 each.Get latest Market online at cnbctv18.com The big story this morning is the 25 basis points (bps) rate cut by the US Federal Reserve. Mixo Das, who looks after Asia equity and quant strategy at JPMorgan, shared his views on the same.

“I think the Fed rate cut was well priced in, the 25 bps and people were looking for guidance from what the Fed is going to do the next and the Jerome Powell wasn’t very clear on what the Fed is looking at going forward and his comments for the US economy is quite strong was taken by the markets as being a little bit more hawkish,” Das said on the sidelines of JP Morgan Investor Conference. READ MORE

India's largest online market place IndiaMART InterMESH has already begun to reign over the market. Among 11 IPOs in 2019, IndiaMART reported highest gains of about 34.05 percent so far this year. The stock price rose about 45 percent in September.

IndiaMART InterMESH made stock market debut on July 4 at the issue price of Rs 973 and rose 78 percent in two and a half month to Rs 1,736 per share today on the NSE. Moreover, IndiaMART shares hit all-time highs in the last nine sessions straight, rising nearly 20 percent. READ MORE

-The week so far has been marred by concerns over surging crude prices and slowing economic growth both at home and globally. The indexes have shed more than 2.5% each so far this week.

-Shares of YES Bank fell over 6 percent, down for the second day, after CARE downgraded ratings on non-convertible debentures of the promoter company Morgan Credits.

-IIFL Wealth Management, the demerged entity of IIFL Holding, made its debut on Indian bourses on Thursday. The stock listed at Rs 1,200 per share on BSE and 1,210 per share on NSE.

-The share price of Vodafone Idea jumped over 16 percent on Thursday after the Telecom Regulatory Authority of India released a consultation paper seeking to review the deadline to bring down the interconnect usage charge to zero.

The Telecom Regulatory Authority of India has released a consultation paper to review the deadline to bring down the interconnect usage charge to zero. The move will be positive for Bharti Airtel as well as Vodafone Idea but negative for Reliance Jio. Currently, an operator is required to pay 6 paise per minute as mobile call termination charges, called interconnect usage charges (IUC), which is proposed to be made nil from January 1, 2020. READ MORE 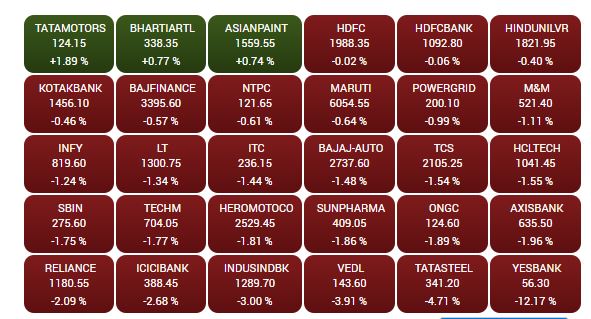 Shares of Zee Entertainment Enterprises (Zee) slumped over 8 percent on Thursday after sources told CNBC-TV18 that Zee promoter met MF lenders for an extension of the September 30 deadline for the repayment of debt. Fifty percent of the dues has been already paid back by the company, however, the rest is awaited. The deadline falls under the standstill agreement entered in January 2019. Zee fell as much as 8.5 percent to Rs 306.65 per share on BSE. In response to CNBC-TV18, the Essel Group said, "Essel Group is in constant dialogue with the consortium of lenders. The overall asset divestment approach is in steady progress and the group remains focused on the repayment process. All decisions taken in this process so far have been in the interest of the lenders and have only been implemented after their consent. The group will continue to follow this approach with sheer focus on repayment."

Healthcare, both traditional and digital, seems to be emerging as one of the new growth frontiers, with the industry expected to hit the valuation mark of over $250 billion by next year. Within healthcare, the health tech space currently consists of over 5000 startups, having raised more than $500 million since 2014. A small example of the rising interest in healthcare is reflected in three deals announced on Wednesday. Two of the three deals were in the health-tech space and one and for a traditional brick and mortar hospital, but a super specialty. READ MORE