CNBC-TV18 Market Highlights: Equity benchmarks BSE Sensex and NSE Nifty ended Wednesday's trade with marginal gains led largely by banks and financials. But weakness in index heavyweight Reliance Industries and Kotak Mahindra Bank limited gains. Indices closed positive a day ahead of the assembly election results of Haryana and Maharashtra. The Sensex rose nearly 95 points, settling the day's trade above the 39,100 mark, while the Nifty50 also closed above the 11,600. This blog will keep you posted on the latest updates and developments from the stock markets today:

This stock continues to be buyers' favourite, rising to new highs every consecutive session

The initial public offering of Indian Railway Catering and Tourism Corporation (IRCTC) saw a bumper opening with a 3.5 times subscription on the final day of its issue. In just one week, the stock's market capitalisation escalated to Rs 14,000 crore from Rs 5,000 crore. From its issue price of Rs 320, the stock has jumped 184 percent on Wednesday. Since its listing, the stock has been rallying every consecutive session. On October 23, it touched Rs 900 per share, which is the largest gain seen in any of the IPOs. READ MORE

"The decorative business segment in India registered a high double-digit volume growth, though lower than that witnessed in the first quarter. Automotive coatings JV (PPG-AP) business continued to be impacted by the slowdown in the automobile industry and even the Industrial Coatings JV (AP-PPG) business was impacted by demand slowdown. The entire coatings business, however, benefited from the benign raw material price environment," KBS Anand, Managing Director & CEO said.

Revenue from home improvement business grew by 18.6 percent year-on-year to Rs 121 crore in Q2 but at the operating level, the segment posted a loss of Rs 15.53 crore in Q2 against a loss of Rs 12.50 crore in same period last year. Consolidated earnings before interest, tax, depreciation and amortisation (EBITDA) increased 13 percent YoY to Rs 954.8 crore and margin rose by 60 bps to 18.9 percent in the quarter ended September 2019. Numbers missed analyst expectations as revenue was expected at Rs 5,195 crore and EBITDA was estimated at Rs 1,039 crore with margin at 20 percent for the quarter, according to a poll of analysts conducted by CNBC-TV18. Tax expenses for the quarter fell 97 percent to Rs 7.23 crore YoY.

Asian Paints said KBS Anand, MD & CEO, will be retiring from the company on March 31, 2020 and CFO Jayant Merchant will also be retiring on November 26, 2019.

-Infosys shares erased early losses and rose over 1 percent on increased buying. Infosys shares jumped as much as 1.83 percent to Rs 655.35 per share on the BSE intraday.

-The share price of RBL Bank plunged 18 percent intraday on Wednesday after the lender reported a sharp spike in provisions and deterioration in the asset quality in the July-September quarter.

Invest in gold financiers this year; brokerages recommend 'buy' on these two stocks Many brokerages have maintained 'Buy' calls on Muthoot Finance and Manappuram Finance, stating that the stocks are highly profitable but will take their own sweet time to rally.Get latest Finance online at cnbctv18.com

Axis Bank to see higher slippages in FY20 compared to FY19, says CLSA Brokerage firm CLSA, in its latest report, has said that Axis Bank is likely to witness higher slippages in the financial year (FY) 2020 against FY19. This, in turn, will keep the credit cost elevated this year, said CLSA. The brokerage firm, however, said that "a normalisation from FY21 onwards will be key to a rebound in earnings". READ MORE Shares of Axis Bank traded at Rs 719 apiece, up 0.88 percent on NSE at 1.56 pm. The Nifty50 traded 44.55 points higher, up 0.38 percent, at 11,633.
Share:

Bajaj Auto on Wednesday reported better-than-expected earnings in the July-September quarter this fiscal year. The standalone net profit this year came in at Rs 1,402 crore v/s CNBC-TV18 poll of Rs 1,189 crore. Last year, the auto maker's net profit came in at Rs 1,152.48 crore, an increase of 22 percent year-on-year (YoY). The standalone revenue of the company declined 4 percent YoY to Rs 7,707.3 crore as against Rs 8,036.34 crore in the corresponding quarter last year. READ MORE

This smallcap construction firm jumps 20% on mega order win; up 30% so far this year Shares of JMC Projects (India) Ltd surged nearly 20 percent intraday on Wednesday after the construction and engineering firm won orders worth Rs 1,059 crore. The stock opened at the day's high of Rs 132.10 per share, jumping nearly 20 percent. In an exchange filing, JMC Projects said it has won "Residential and Commercial Building Project in South and North India totalling Rs 782 crore" and "Water Supply Project in Jharkhand of Rs 277 crore". READ MORE
Share:

Samvat 2076: Manish Chokhani, Raamdeo Agrawal and S Naren on the road ahead for the Indian market: Here is the full transcript While it's difficult for investors to time market phases, market experts remain divided over the outlook.

Infosys shares declined over 4 percent in the early trading over reports that market regulator Sebi may seek clarification from the IT firm over whistleblower complaints alleging unethical practices by top executives. Also, the company is facing a threat of a possible class-action lawsuit in the United States. READ MORE

Here’s what has so far happened in the markets today

-Equity benchmarks BSE Sensex and NSE Nifty have recovered led by banks and financials after starting on a tepid note on Wednesday.

-Among the gainers were HCL Tech, Bajaj Finance, TCS, TechM, Axis Bank, Sun Pharma and RIL, rising up to 2 per cent.

HDFC Securities has maintained 'buy' rating on AU Small Finance Bank at a target price of Rs 807 per share, an upside potential of over 17 percent over the long-term. At 10.03 am, shares of AU Small Finance Bank Ltd quoted at Rs 696.20 per share, up over a percent on the NSE. The stock opened at Rs 700, gaining from its previous close of Rs 689.25.

"We like AU Bank's ability to sustain quality growth, particularly in challenging environs. This, we believe, is reflective of its NBFC roots even as it gains from the troubles faced by erstwhile peers. While asset quality remains stable, the bank’s NBFC/RE exposure does hold some risk. Superior return ratios and improving performance across metrics warrant premium multiples," HDFC Securities said in a research report on Tuesday. READ MORE

RBL Bank slips 18% to hit 52-week low as asset quality deteriorates in Q2 The share price of RBL Bank plunged 18 percent intraday on Wednesday after the lender reported a sharp spike in provisions and deterioration in the asset quality in the July-September quarter. Intraday, the stock fell 17.8 percent to Rs 235.85, its 52-week low. At 11:08 AM, the stock was trading lower by 13.26 percent at Rs 248.90 on the NSE. READ MORE
Share:

JMC Projects jumps over 19% after winning orders worth Rs 1,059 crore

Shares of JMC Projects surged nearly 20 percent intraday on Wednesday, hitting the day's high at Rs 132.10 per share. Shares jumped after the company had won orders worth Rs 1,059 crore. The company has secured new orders which include orders worth Rs 782 crore of residential and commercial building projects in South and North India. The second order is for water supply project in Jharkhand of Rs 277 crore. At 11.32 am, shares of JMC Projects (India) ltd quoted at Rs 113.15, up 2.68 percent on BSE. The benchmark 30-share S&P BSE Sensex traded 219 points higher, or 0.56 percent, at 39,182.

Infosys shares volatile after falling 4% in early trade over threats of Sebi inquiry, class-action suit After losing over 16 percent in the previous session, Infosys shares declined over 4 percent on Wednesday over reports that market regulator Sebi may seek clarification from the IT firm over whistleblower complaints alleging unethical practices by top executives. Also, the company is facing a threat of a possible class-action lawsuit in the United States. Infosys shares fell as much as 4.39 percent to Rs 615 per share intraday on the BSE. But soon recovered to hit a high of Rs 650.35 per share, up 1.09 percent from its previous close. CNBC-TV18 reported today that the Securities and Exchange Board of India is likely to seek clarification from Infosys over the whistleblower complaints alleging wrongdoing by Infosys CEO Salil Parekh and CFO Nilanjan Roy. Sebi may question Infosys about the company not informing the exchanges upon the receipt of whistleblower complaint dated September 30. READ MORE
Share:

Here’s what has so far happened in the markets today

-Among the gainers were HCL Tech, Bajaj Finance, TCS, TechM, Axis Bank, Sun Pharma and RIL, rising up to 2 per cent.

Jubilant Foodworks to gain as Morgan Stanley ups price target Shares of Jubilant Foodworks traded higher on Wednesday after gobal brokerage firm Morgan Stanley retained 'overweight' rating and raised the price target by 8 percent to Rs 1,650 a share after the company's earnings beat analyst estimates and management confidence over the food-service sector's long-term prospects. MS believes that opening new stores was likely to boost revenue growth by over 7 percent in 2019-20 (April-March). In July-September, the company net added 34 Domino's Pizza outlets. Shares of Jubilant Foodworks quoted at Rs 1,499.20 per share, up Rs 70.35, or by 4.92 percent on NSE at 10.01 am. The broader Nifty50 was down by 14.50 points to trade at 11,574. The BSE Sensex slipped 37 points to 38,927.
Share:

Tata Motors shares fall on Brexit woes Tata Motors shares fell 2.65 percent intra-day on Wednesday as outlook for subsidiary Jaguar Land Rover weakened after the UK Parliament rejected Prime Minister Boris Johnson's attempt to fast-track a Brexit deal through Parliament. A UK-EU deal being ratified would be significant for Tata Motors as Jaguar Land Rover's operations contributes around 70 percent to the company's total revenues. The EU and the UK together make up 40 percent of Jaguar Land Rover's revenues. Jaguar Land Rover could face severe supply chain disruptions if the UK leaves the EU without a deal, given that the UK is the company's largest production base. Shares of Tata Motors quoted at Rs 128.30, down 2.62 percent on NSE at 9.46 am. The broader Nifty50 added 6 points to trade at 11,594.
Share:

Rupee opens lower at 71 per dollar

Axis Bank posts a standalone net loss of Rs 112 cr in Q2 on one-time tax impact Private lender Axis Bank posted a healthy set of numbers for the second quarter on Tuesday. Net interest income grew by 17 percent to over Rs 6,100 crore and asset quality also saw an improvement. The bank reported a net loss of Rs 112.08 crore on a standalone basis for the second quarter ended September of the current fiscal due to a one-time tax impact. The private sector bank had posted a net profit of Rs 789.61 crore in the corresponding July-September quarter of the previous fiscal. READ MORE
Share:

Dhanteras: Gold ETF, sovereign gold bond and physical gold. Which is the best way to invest in gold? 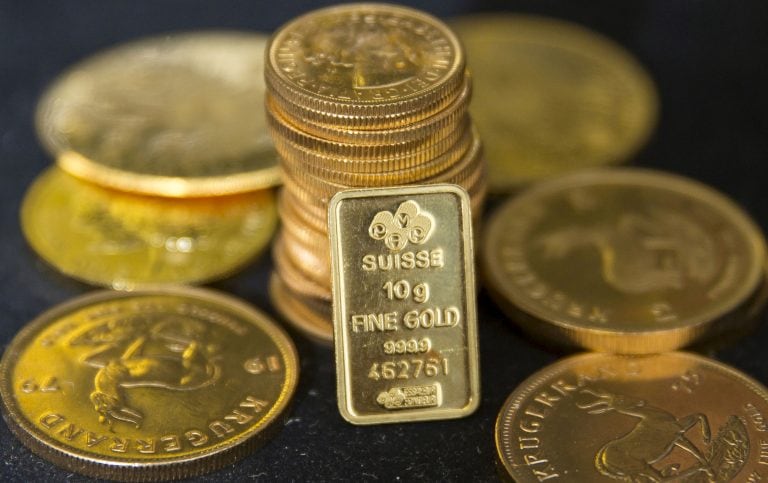 There are many ways you can invest in gold: physical gold, gold exchange-traded funds and sovereign gold bonds. Here is a comparison.Get latest Personal Finance online at cnbctv18.com

Indian investors should not give undue weightage to macro indicators: Here is why

Here's why CLSA's Adrian Mowat is underweight on India In India, PM Modi responded to weakening economic growth with large corporate tax cuts. These reduced the marginal rate by 10 percent and 18 percent for new manufacturing. With Trump’s tax cuts marking the top of the US market and economy, investors are wary. To be fair, the catalyst for India’s tax cuts was weak growth. Its nominal and real growth is at post-GFC lows. Since the reversal of the increase in equity, capital gains tax policy has been supportive. But the key issue is real household income growth, both urban and rural. The RBI consumer confidence index is back to 2013 lows. Employment expectations are particularly weak. Our hope for the economy is that housing benefiting from low rates and inventories leads the recovery. Cement and mortgage companies are the direct plays. We are Overweight these sectors and Underweight expensive staples, IT, materials and consumer discretionary. The result is a modest Underweight in India.
Share:
view more