GAIL, SBI, TCS, Grasim and Bharti Airtel were the top gainers while Bharti Infratel, YES Bank, Maruti Suzuki, Cipla, and Britannia were the top laggards at the closing bell.

Consolidated net profit up 10.3 percent at Rs 355 crore as against as Rs 321.7 crore in the corresponding quarter last year.

United Bank of India in its July-September quarter reported net profit at Rs 124 crore as against the loss of Rs 883.2 crore last year.

1. Hope the government will take a balanced approach on AGR matter for long-term viability

2. Recommended that nil termination charge be deferred by 3 years

3. Impacted by Jio phones in bottom-end of the market i.e. in feature phones

4. Awaiting the outcome of the committee of Secretary formed to consider relief

MRF board to consider the issue of non-convertible debentures in its meeting scheduled on November 8 along with standalone and consolidated unaudited financial results of the company for the quarter and half year ended September 30, 2019, and declaration of interim dividend.

The shares of Indoco Remedies rallied 15.58 percent intraday on Wednesday after the pharma company reported a strong set of July-September quarter numbers. The company's consolidated net profit came in at Rs 7.8 crore as against the loss of Rs 7.4 crore year-on-year (YoY). 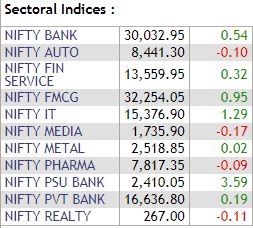 The Indian equity benchmark indices continued to trade higher for the second consecutive session on Tuesday led by the gains in PSU banking stocks.

Petronet LNG says FY20 tax rate to be less than 25.17% on deferred tax credit of Rs 380 crore. And for the Tellurian LNG deal, the company will appoint a consultant soon. The deal can  be extended by 2-3 months in case of a delay 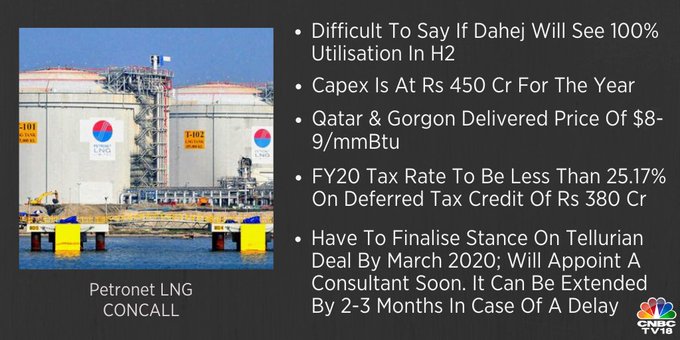 The insurer reported a 7.6 percent year-on-year (YoY) increase in its September quarter (Q2) net profit at Rs 308.7 crore, while its premium grew by 10 percent YoY to Rs 7,453.7 crore during the period.

The stock has been one of the biggest gainers in the last year. It gave 70 percent returns against 16 percent rally in the NIfty50.