The Sensex and Nifty50 extended losses to a second straight session amid a global sell-off triggered by concerns about the Russia-Ukraine conflict. Banking and financial stocks were the biggest drags for the headline indices.

Indian equity benchmarks plunged amid broad-based selling on Monday taking weak cues from global markets, as escalating tensions between Russia and the West over Ukraine worried investors. It was the biggest single-day fall for the Indian market since April 2021. Losses in the heavyweight BFSI and IT packs were the biggest drags on headline indices.

The Sensex fell 1,747.1 points or three percent to end at 56,405.8 and the broader Nifty50 settled at 16,814, down 560.8 points or 3.2 percent from its previous close. Both indices are now down more than 2.5 percent for the year so far, and off more than nine percent from their peaks (October 2021).
Investors lost Rs 8.6 lakh crore in wealth as the market capitalisation of BSE-listed companies came down to Rs 255.3 lakh crore, exchange data showed.
Broader markets also weakened, with the Nifty Midcap 100 plummeting 3.9 percent and its smallcap counterpart 4.4 percent. Both indices confirmed a correction, down 14 percent and 11 percent from their highs respectively.
ALSO READ
: Nifty turns 2022 negative
All stocks but one in the Nifty50 universe were in the red at the close. JSW Steel, HDFC Life, Tata Steel, Tata Motors, Shree Cement, SBI, UPL, ICICI Bank and Kotak Mahindra Bank were the top blue-chip laggards, down between 4.7 percent and 6.5 percent.
TCS was the only gainer in the 50-member pack, finishing the day up 0.9 percent, after the country's largest IT company announced a record date for buyback of shares.
ICICI Bank, the HDFC twins, Infosys and Reliance Industries were the biggest contributors to the fall  in both Sensex and Nifty.
All sectors were deep in the red. NSE's banking, private banking, PSU banking and financial services indices finished the day with losses of 4-6 percent. 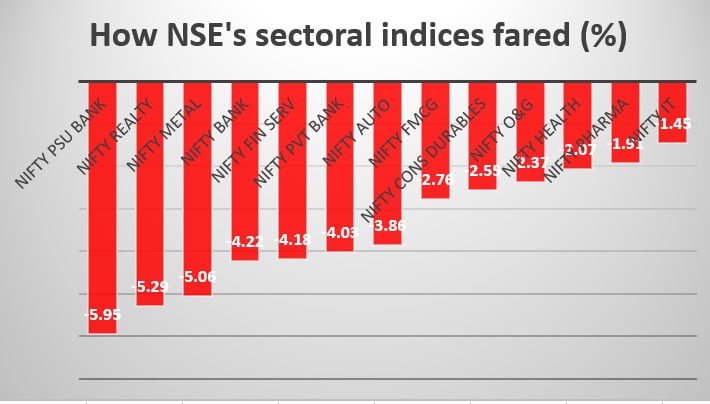 "Increased tensions between the US and Russia over Ukraine sent oil prices rising and forced investors to dump risky assets. The risk sentiment was further dampened ahead of the Fed’s emergency meeting which heightened fears of aggressive monetary tightening," said Vinod Nair, Head of Research at Geojit Financial Services.
The US said on Sunday that Russia could invade Ukraine at any time and might create a surprise pretext for an attack, reaffirming a pledge to defend NATO territory. (Catch latest from CNBC-TV18's coverage of Russia-Ukraine conflict)
NSE's India VIX index -- which gauges the expectation of volatility in the near term -- surged 23 percent to finish close to the 23 mark, its biggest jump since November 26.
Overall market breadth was extremely negative, with an advance-decline ratio of 1:10.
Around 475 stocks on the Nifty 500 -- NSE's broadest index -- succumbed to negative territory. Among the top laggards were Metropolis, Mahindra Logistics, KRBL, HEG and Indiabulls Real Estate, falling 10-15 percent.
Global markets
European shares began Monday with deep cuts tracking losses across Asia, as warnings that Russia could invade Ukraine at any time sent oil price soaring to seven-year highs. The pan-European Stoxx 600 index was down 2.6 percent in early deals.
S&P 500 futures were down 0.7 percent, suggesting a weak opening ahead on Wall Street.
Technical view
"After weeks of consolidation, we feel bears are now in a more commanding position and likely to pull the Nifty50 further lower. The index has next crucial support around its 200-day exponential moving average of 16,680, and then 16,400," said Ajit Mishra, VP-Research at Religare Broking.
Catch latest stock market updates with CNBCTV18.com's blog
Check out our in-depth Market Coverage, Business News & get real-time Stock Market Updates on CNBC-TV18. Also, Watch our channels CNBC-TV18, CNBC Awaaz and CNBC Bajar Live on-the-go!