The Sensex and Nifty50 ended a volatile session around one percent higher, helped by buying interest in financial and IT shares. Both headline indices halted a four-day losing streak.

Indian equity benchmarks made a comeback on Tuesday, halting a losing streak that lasted four back-to-back trading sessions, helped by strength in financial and IT stocks. However, weakness in metal and select oil & gas stocks played spoilsport. Investors globally however remained cautious tracking newsflow on the Russia-Ukraine war.

The 30-scrip Sensex index rose 581.3 points or 1.1 percent to end at 53,424.1 and the Nifty50 benchmark settled at 16,013.5, up 150.3 points or one percent from its previous close. On the other hand, Indian Oil, Sun Pharma, Tata Consumer, Cipla, TCS, Tech Mahindra and Dr Reddy's -- rising between 2.8 percent and 4.2 percent -- were the top blue-chip gainers.
On the other hand, Hindalco, ONGC, Tata Steel, JSW Steel, Britannia, UPL and Nestle -- down between 0.9 percent and 4.6 percent -- were the worst hit among the 13 laggards in the Nifty50 pack.
Infosys, TCS, ICICI Bank and the HDFC twins were the biggest contributors to the gain in headline indices.
Among sectoral indices, the Nifty Bank rose 0.9 percent for the day, recouping all of its intraday losses.
The IT and pharma indices gained 2.7 and 2.4 percent respectively. The rupee settled at 76.91 against the US dollar on Tuesday, not far from a record low of 76.96 hit the previous day. Weakness in the rupee boosts the profitability of exporters such as IT and pharma companies. 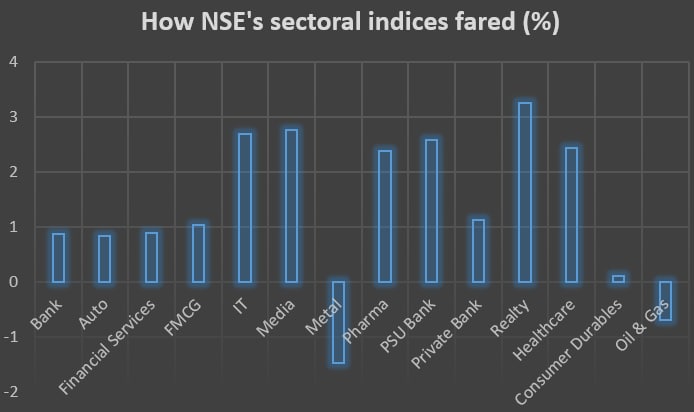 The metal index fell 1.5 percent, as metal stocks took a breather after a rally on the back of surging global prices.
"Favourable exit poll results of state election and low-level buying seen in midcap and smallcap stocks added to optimism in the domestic market," said Vinod Nair, Head of Research at Geojit Financial Services.
The rebound was prevalent across broader markets. The Nifty Midcap 100 and Nifty Smallcap 100 indices rose 1.2 percent and 1.5 percent respectively.
In the midcap and smallcap segments, Gujarat Ambuja, IGL, Indian Bank, Lemontree and Heidelberg -- up between 5.5 percent and 12.1 percent -- were the top gainers. On the flipside, JK Cement, Tata Teleservices, Nalco, Wockhardt and KSB -- down between 3.9 percent and 6.3 percent -- were the top losers.
Overall market breadth remained in favour of the bulls, with an advance-decline ratio of 2:1 as 2,243 stocks rose and 1,085 fell on BSE.
The India VIX -- also known as the fear index -- eased 2.5 percent to finish the day at 28.6. Last month, Russia's move to invade Ukraine had sent the index soaring to almost 34 -- a 20-month high.
Global markets
European shares saw cautious gains in early hours as peace talks between Russia and Ukraine made little progress in abating the escalating war. Nervousness persisted among investors amid talks between the US and European governments about banning imports of Russian oil and natural gas supplies.
The pan-European Stoxx 600 index was up half a percent at the last count. S&P 500 futures were up 0.1 percent, suggesting a mildly positive start ahead on Wall Street.
Technical view
The Nifty50 has formed a promising long bullish candle that supports a short-term uptrend, according to Shrikant Chouhan, Head of Equity Research (Retail) at Kotak Securities.
"As long as the Nifty holds the 15,900-15,850 support zone, the reversal formation is likely to continue, and there are bright chances of the index 16,150-16,250 levels. On the other hand, below 15,850, the uptrend would be vulnerable,” he said.
Catch latest stock market updates with CNBCTV18.com's blog
Check out our in-depth Market Coverage, Business News & get real-time Stock Market Updates on CNBC-TV18. Also, Watch our channels CNBC-TV18, CNBC Awaaz and CNBC Bajar Live on-the-go!