CCD shares were trading 19.98 percent lower at Rs 122.75 per share on the NSE. In last two trading sessions, the stock plunged 40 percent, and in last one year it has tanked 54 percent.
On Wednesday, at 6 AM, Siddhartha’s decomposed body was found after 36 hours of searching in Netravathi River, said Karnataka authorities. A group of fishermen recovered the body from the Netravathi river in Karnataka, at a distance from the bridge where the coffee baron was last seen late on Monday, reported IANS.
Two days prior to his disappearance, the 60-year-old had left behind a note to his employees that revealed he was in deep debt. 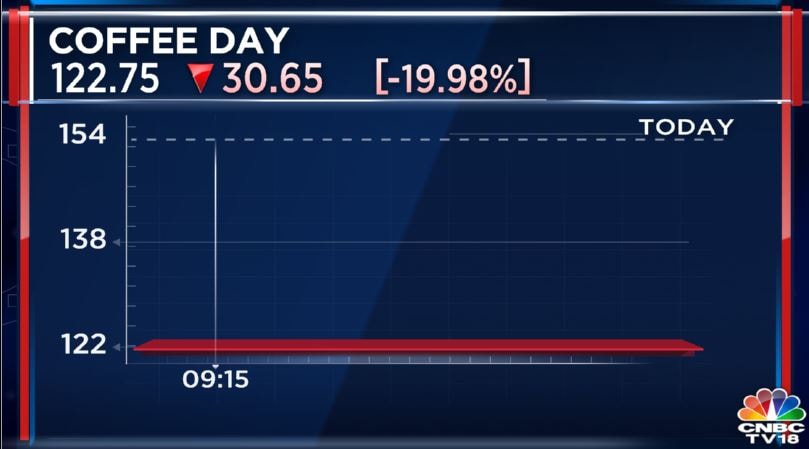 VG Siddhartha in the letter said, “After 37 years, with strong commitment to hard work, having directly created 30,000 jobs in our companies and their subsidiaries, as well as another 20,000 jobs in technology company where I have been a large shareholder since its founding, I have failed to create the right profitable business model despite my best efforts.”
Catch all the latest and live updates here on CNBC TV18 Market Live Blog.
Disclaimer: CNBCTV18.com advises users to check with certified experts before taking any investment decisions.
Check out our in-depth Market Coverage, Business News & get real-time Stock Market Updates on CNBC-TV18. Also, Watch our channels CNBC-TV18, CNBC Awaaz and CNBC Bajar Live on-the-go!