The Indian arm of the US Based “Whopper” maker Burger King has filed for an initial public offering (IPO) to raise around Rs 400 crore. For a company that started operations in India in 2014, this may perhaps be one of the fastest to go for an IPO.

For an investor, who has already seen big gains in Jubilant Foodworks and McDonalds’ operator Westlife development, this presents another serving. Those who missed out on investing in the previous two stocks earlier will surely be looking at biting in. But as all value conscious Indians, there always is the big question – Kitne Ka Hai?

While we have to wait for the price, the menu looks rather enticing. India is a tough market for a foreign company to make in-roads into. Private equity firm Everstone Capital, which operates Burger King India, is considering a private placement of shares worth Rs 150 crore ahead of the IPO, according to the draft red herring prospectus.

Burger King India’s store expansion and revenue growth have been scorching. At higher sales, the operating leverage factor led to stronger growth in EBITDA and Cash Flow from Operations. Due to the nature of the business, higher depreciation has weighed down on the bottom-line. 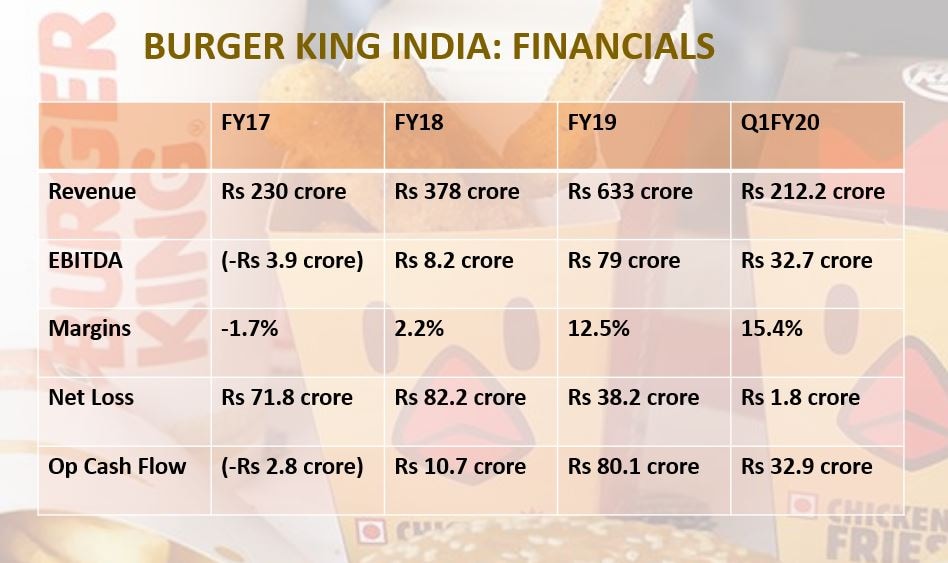 Burger King’s growth strategy has been smart and simple—Cluster Based, and in the vicinity of a successful McDonalds outlet where the initial hard-work has already been done. However, despite the strong expansion in the number of stores, they remain absent in the Eastern part of India and is relatively less exposed to the Southern Markets.

Going forward, a higher number of stores, better same-store sales growth and a ready customer willing to try newer offerings may fuel earnings further. A higher share of delivery and online orders, too, can aid earnings.

The company has a stated objective of at least 325 restaurants by the end of FY20. This is an important metric that helps understand the business of a quick-service restaurant. Same-store-sales growth (SSSG) tells the story of how each individual stores grow and provides an insight into future revenue potential. It is also the key lever for margin expansion. Over the last two fiscal years, as per data provided by Burger King, their same-store-sales growth has been robust.

While the growth path looks exciting, it is fraught with serious competition. While leader McDonalds will most definitely continue to defend its market share, in the food business it is more about the share of stomach.

Not only will Burger King India have to navigate through national competition from McDonald's, Jubilant Foodworks, KFC and Subway, but also local favourite joints in each locality it operates. The ever-growing presence of food tech companies and exciting offers from Swiggy and Zomato is a story well narrated. Not to forget, the looming threat of Amazon’s entry into this space too.

The impact of heightened awareness of healthy eating needs to be monitored too. Though in the past these fears have remained unfounded, it is a trend that one needs to be watchful of. 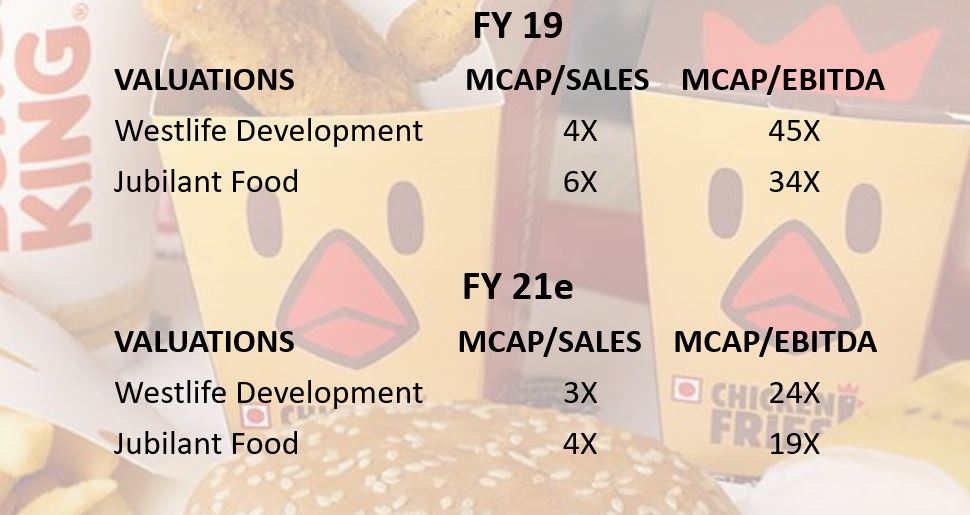 Using these yardsticks as a comparable and given Burger King’s higher growth prospects on a lower base, the company may ask for a slight premium. At an assumed 8-9X FY19 sales and a higher MCAP/EBITDA, multiple, market cap assumption of Rs 4,500-Rs 5,000 crore may be a rough guesstimate. However, given the long growth path, the Street may ascribe it higher valuations too.