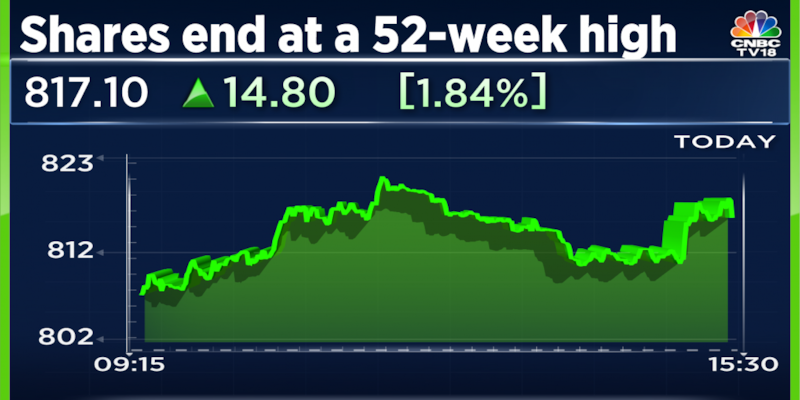 Bharti Airtel Ltd.'s shares jumped for an eighth straight session on Thursday to end at their highest level in a year.

The stock closed 2.1 percent higher at Rs 819 on the National Stock Exchange, after hitting a 52-week high level of Rs 822.20 intraday.

On Thursday, the company’s Africa-based unit Airtel Africa reported that its revenue grew 13 percent year-on-year to $2.57 billion from $2.27 billion in the half-year that ended in September.

Airtel Africa’s total customer base rose 9.7 percent to 134.7 million during the period, with the telco noting ‘increased penetration’ across mobile data and mobile money services.

Airtel Africa also declared an interim dividend of 2.18 cents compared to 2 cents a year before.

Earlier this month, Bharti Airtel launched its 5G services in eight cities across India. The company said that Airtel subscribers in Delhi, Mumbai, Chennai, Bengaluru, Hyderabad, Siliguri, Nagpur, and Varanasi would be able to use Airtel 5G Plus services in a phased manner.

After the 5G launch, brokerage firm Morgan Stanley said it is ‘overweight’ on the company, with a price target of Rs 825 per share. The brokerage said it believed that 5G services for consumers could be priced competitively and that the industry might look to increase the 4G base tariff.

Earlier this month, brokerage house Axis Securities had also issued a ‘buy’ rating on the stock with a near-term target price of Rs 875, indicating a potential upside of nearly 7 percent from the current market price.

An increase in data consumption in India, strong 4G conversions, and healthy revenue growth are likely to be key drivers for Bharti Airtel shares, Axis Securities said in the report.