Banking and financial services received the highest investment from foreign portfolio investors in the month of November, with $2.34 billion inflows. This was followed by media, which received a $599 million FII investment.

FPIs infused $3.14 billion or Rs 22,872 crore on a net basis in the Indian capital market in November, recording inflows for the third straight month.

So far in the calendar year 2019, foreign investors infused $13.7 billion in the primary and the secondary market. The BFSI and insurance remained top investment choices for FIIs with infusions worth $4.9 billion and $4.8 million, respectively, for the year 2019, according to a December 13 report.

ICICI Bank was the most favoured stock among the BFSIs, while, in the insurance sector, HDFC Life, ICICI Prudential and ICICI General Insurance attracted massive buying interest from FIIs, according to an analysis by Edelweiss Securities. The reason behind the rising FII inflows was their addition to global MSCI benchmark indices. 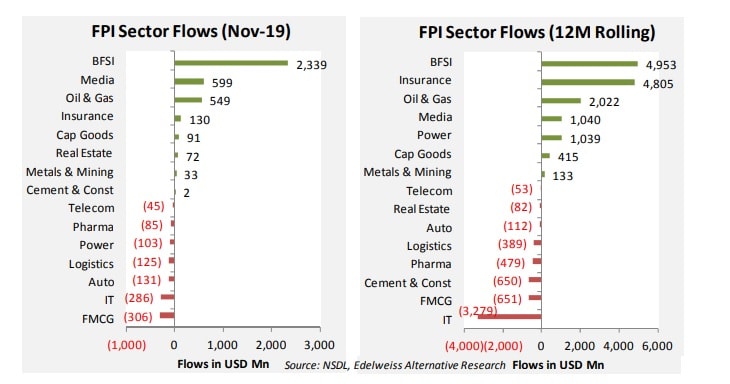 The media sector witnessed buying interest in the past two months with FPI deploying $ 728 million, mainly due to blocks sold by promoters in Zee Entertainment and QIP in PVR, noted Edelweiss.

Also seeing revival in FPI investment was the oil and gas sector, which received $950 million investment in the last two months, according to the report. Before that, FPIs had withdrawn $777 million from this sector.

The information and technology sector has also witnessed heavy selling by foreign investors, with withdrawals worth $286 million in November and $3.27 billion in the last 12 months.

The Nifty IT has underperformed Nifty Index by 7.5 percent due to muted returns in heavyweights TCS and Infosys, which have 27.5 percent and 24 percent weightage in the Nifty IT index. Infosys and TCS each rose 4.3 percent in the last 12 months, compared to an 11 percent gain for the Nifty50. 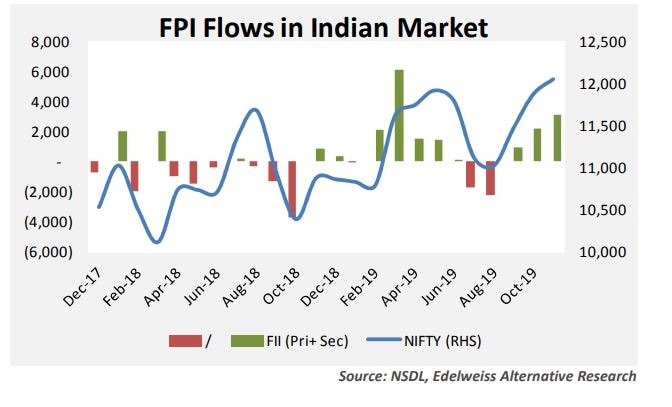 FMCG sector saw an outflow of about $300 million. However, Edelweiss Securities said the sector, where FPIs hold $50 billion, continues to enjoy rich premium.

FPI exposure in the telecom increased by 42 bps in November on the back of fresh interest coming in the aftermath of tariff hikes, noted the brokerage.

In the Nov month, flows largely came from the secondary market with a whopping $2.32bn getting pumped in. As of November end, FPIs asset under custody stands at $423.94 billion as against $417.914 billion in October; up by a percentage.
Tags BFSI foreign investors FPI insurance Stock market