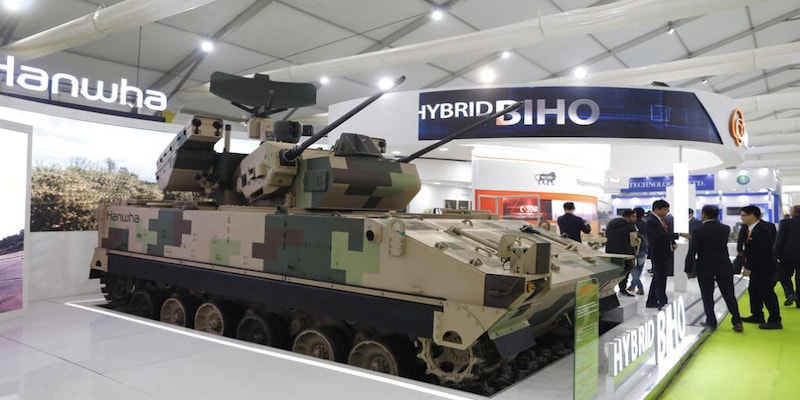 In a boost to ‘Atmanibhar Bharat’, the government has announced to introduce import embargo on 101 defence equipment and items beyond a given timeline to enhance indigenized production.

In a boost to ‘Atmanibhar Bharat’, the government has announced to introduce import embargo on 101 defence equipment and items beyond a given timeline to enhance indigenized production.

On Sunday, the Ministry of Defence (MoD) announced an import embargo list of 101 defence items to be progressively implemented between 2020 and 2024. The restrictions on the import of 101 weapons and military platforms including artillery guns, assault rifles, and transport aircraft in what could give a major fillip to the domestic defence industry.
Following the announcement, the shares of defence sector companies rallied up to 14 percent on Monday.
“The decision offers a great opportunity to the Indian defence industry to manufacture the items in the negative list by using their own design and development capabilities or adopting technologies designed & developed by DRDO to meet the requirements of armed forces in coming years,” analysts said.
The estimated embargo list to enable an estimated Rs 4.0 lakh crore worth of contracts would be placed to the domestic industry over the next five to seven years. This comes to average contract of Rs 57,000 crore to Rs 80,000 crore per annum.
“This would provide significant thrust to defence manufacturing companies in scaling up their production capabilities in long term. In our coverage universe, companies like L&T, Bharat Electronics (BEL) and Cochin Shipyard (CSL) with strong indigenous capabilities in products like artillery systems, missile sub-systems, aerospace, radars, electronic warfare systems, shipbuilding, etc, are likely to benefit from the move in the long run.
Companies like Bharat Dynamics (BDL), Hindustan Aeronautics (HAL), BEML, Mahindra Defence Systems (MDSL), Tata Advance Systems (TASL) to benefit across their varied product portfolio,” ICICI Direct said.
Though the embargo list is sentimentally positive, the execution on ground in terms of rapid indigenisation, pick-up in ordering, which usually takes bit longer and get delays, allocation of funds to defence capital expenditure and working capital management would be key monitorables to achieve the desired results, it added.
The brokerage believes PSUs are best placed to get incremental order inflows and continue to maintain Buy on Midhani and Garden Reach (GRSE). It maintained Reduce on BEL and Solar.
ICICI Securities believes the categorisation of the embargoed items doesn’t impact order inflow or earnings expectations.
Global brokerage CLSA says it sees India’s import embargo on 101 defence items creating a visible long-term opportunity for capable domestic vendors such as L&T, Bharat Electronics, Hindustan Aeronautics and Kalyani Group. However, given budget constraints, the graded import ban across 2020-2024 and import commitments, it expects orders emerging in FY22.
L&T has a presence in over a third of the 101 items in the list, including some major items like submarines, ships, missile launchers, radar and artillery.
“L&T has built capabilities and invested across the army and navy domains which offers an Rs 2.6 lakh crore indigenisation opportunity. A 10-20 percent success rate in its domains would multiply L&T’s current defence book 4-7x,” CLSA said.
Over the past three years, L&T’s defence segment has contributed just 3 percent of revenue and its order book is only Rs 8,600 crore. 10-20 percent of army and navy procurement would represent Rs 27,000-Rs 54,000 crore and would increase L&T’s order backlog 8-16 percent, CLSA noted.
Check out our in-depth Market Coverage, Business News & get real-time Stock Market Updates on CNBC-TV18. Also, Watch our channels CNBC-TV18, CNBC Awaaz and CNBC Bajar Live on-the-go!