As the rupee holds on to 73 levels against the US currency, is it wiser to avoid exporters such as IT and pharmaceutical companies, which derive the majority of their revenue from overseas markets?

Indian IT stocks, which have contributed much to the market rally recently, are in no mood to take a breather. But is the recent strength in the rupee against the US dollar a warning sign for the IT basket?

Strength in the rupee -- though a boon for importers such as oil companies -- affects the profitability of Indian IT and pharmaceutical companies, which derive the lion's share of their topline from foreign markets. 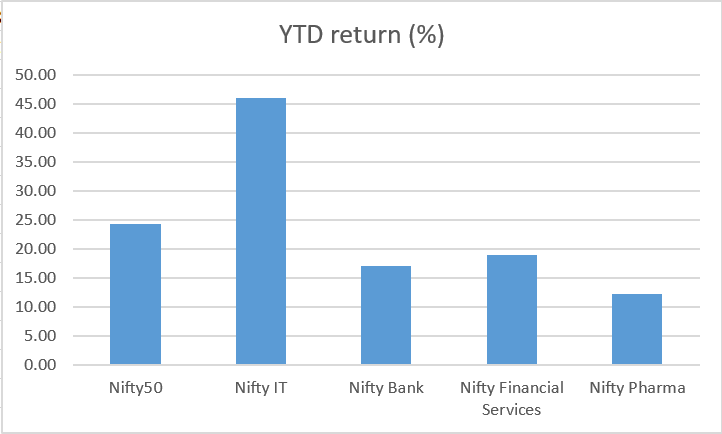 Nifty IT has outshined NSE's sectoral indices this year with a return of 46 percent.
Vinod Nair, Head of Research at IDBI Capital Markets, remains bullish on IT companies with demand for technology expected to remain robust thanks to the pandemic.
"Almost every industry is increasing its technology spending in order to be resilient and flexible and cutting operating expenses. The acceleration of digital transformation in the US, the UK and Europe is benefiting Indian IT companies," he told CNBCTV18.com.
"Developments in technologies such as artificial intelligence, machine learning, robotic process automation, edge computing and 5G are driving digital transformation," Nair added.
Echoing similar views, Siddhartha Khemka, Head - Retail Research at Motilal Oswal Financial Services, said tech spends are expected to remain a critical enabler for enterprises in the new normal.
Nifty IT has beaten the headline Nifty50 benchmark by a wide margin so far in 2021, with a year-to-date return of 46 percent. Here's how its 10 components have fared:
The stock of Tata Consultancy Services (TCS) -- the country's largest IT services company -- has risen 34 percent so far in 2021, backing the IT index's stellar return of 46 percent. IT has the second-largest weightage in the Nifty50 benchmark, after financial services.
ALSO READ | Is there more steam left in Indian IT stocks?
"Managements remain confident of achieving double-digit revenue growth going ahead on the back of a strong deal pipeline around Cloud, data analytics, cybersecurity, automation and AI," said Khemka.
"Some of that has been factored into valuations as stocks trade at a significant premium to its historical price-to-earnings multiples. We feel the re-rating is justified, given the sector’s resiliency and better-than-expected recovery," he added.
Should holders of IT-heavy portfolios worry?
"IT numbers are expected to be good but yes, if this (rupee appreciation) continues, they could indeed come under pressure," said Hemen Kapadia of KRChoksey Securities, calling 72.20 "a make-or-break level".
Despite IT stocks looking a bit overbought technically, the underlying strength in them remains pretty solid, said Kapadia, who sees 72.80 as an important level to watch in the rupee-dollar pair.
ALSO READ | Saurabh Mukherjea says TCS, Infy better plays vs midcap IT
Meanwhile, the rupee has recovered nearly all of its losses in 2021. It has moved within a tight range since hitting a two-month high against the greenback recently. However, its gains might be short-lived.
Continuous foreign fund inflow has helped the rupee gain strength. That while dovish comments from the Federal Reserve Chairman sent the dollar to a two-week low, aiding the rupee.
"Renewed portfolio inflows, a strong buffer of forex reserves and the parabolic rise in domestic equities have underpinned the rupee to nudge higher towards a two-month high," Sugandha Sachdeva, VP-Commodity and Currency Research at Religare Broking, told CNBCTV18.com.
The US central bank is likely to remain accommodative amid a patchy US jobs market softening the dollar index, leading to an appreciation bias for the rupee. The rupee can strengthen a bit more against the greenback in the near term, but is "unlikely to breach the invincible 72.20 mark," she said.
The impact of rupee strength is likely to be limited on IT and pharma companies, said Kapadia.
"Most of these companies have hedging strategies to mitigate high volatility. Companies with upright forex management policies can soften this effect, while others may be exposed to a marginal higher impact this in Q2," he said.
Nonetheless, Kapadia said, the currency situation "may not pose a big influence on a long-term basis".
Where is the rupee headed?
Religare Securities' Sachdeva expects the domestic currency to once again lose ground and depreciate towards 76 by the end of 2021.
"The economic recovery from the pandemic induced lows is now showing signs of peaking out and is likely to act as a headwind for the rupee. Uncertainty around the timing of asset tapering and rising price pressures in the US would also have a bearing on the risk sentiment and the incessant flow of portfolio money, which will steer the path of the rupee," she added.
How to play the export theme now
IT
Despite the medium-term currency concerns, Kapadia remains positive on pharma stocks. He likes Sun Pharma, Aurobindo Pharma and Dr Reddy's in the space.
Nair recommends TCS, Infosys, HCL Tech and Mindtree from the IT pack. He expects strong order books and execution capabilities to drive their performance.
Khemka likes Infosys and HCL Tech from the Tier I  stable, and L&T Technology, Cyient and Zen Technologies among Tier-II players in the sector.
Pharma
From the universe of drugmakers, Nair's top picks are Divi's Labs, Torrent Pharma and Cadila Pharma. "Their robust pipeline, a favourable mix of generics and custom synthesis and incremental demand support top-line growth," he said.
(Edited by : Abhishek Jha)
Check out our in-depth Market Coverage, Business News & get real-time Stock Market Updates on CNBC-TV18. Also, Watch our channels CNBC-TV18, CNBC Awaaz and CNBC Bajar Live on-the-go!