Are 2017 multibaggers losing sheen? Here are 20 stocks that might be bleeding your portfolio

Stocks that more than doubled investor wealth in 2017 have become a source of pain for investors holding them in their portfolio in 2018. Some of these stocks that had risen 100-500 percent in 2017 have now fallen up to 90 percent. These include: Vakrangee (down 91 percent), PC Jeweller (down 70 percent), DCM Shriram (down 52 percent), Jet Airways (down 51 percent) and Unitech (down 46 percent).

Small and midcaps stocks have been the biggest casualty in 2018 even though benchmark indices are still trading in the green. The BSE Midcap and Smallcap indices have slipped 10 percent and over 11 percent till date.

Many reasons can be attributed to the fall in midcap stocks. In some instances like Vakrangee, it was driven by fundamental factors such as resignation of Price Waterhouse & Co as auditor in April. 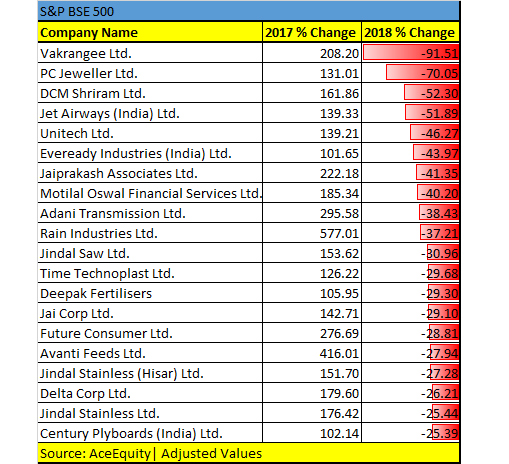 “The bull phase of CY17 provided an impetus to the small and midcap segment to generate staggering returns. Riding on this uptrend trajectory, stocks like Vakrangee which rose around 174 percent have recently sold off,” Dinesh Rohira, Founder & CEO, 5nance.com, said.

He cites valuations way ahead of fundamentals and earnings in a difficult macro regime. “It was partially aided by SEBI’s reclassification of mutual fund which played a role in the price correction through churning of schemes.”

Correction in the broader market led to a margin call on scrips, denting overall sentiment in the market, and translated into further selling. 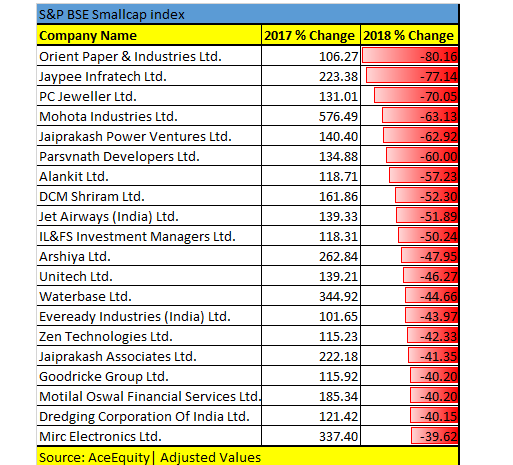 The overhang on the small and midcap space doesn’t seem to end. The recent exit by auditors in the last two months also weighed on market sentiment. Experts feel the correction is not over yet and the pain could continue. “Auditors resigning from a few midcap companies are creating panic among investors. Companies with questionable management integrity have seen a major sell-off as investors run for cover,” Atish Matlawala, Senior Analyst, SSJ Finance & Securities, said.

What should investors do now?

After a strong correction, prices in the small & midcap space have become attractive and valuations have reduced marginally. Though valuation are lower they are not cheap enough, experts said. On a one-year forward basis, (Bloomberg) midcap valuations reduced by only 10 percent. The same for smallcaps corrected almost 20 percent.

Experts feel that not all stocks that provided multibagger returns can be considered a value buys after the correction. “The idea is to look at companies that have quality management, reasonable valuations and robust growth prospects. If investors are holding quality stocks backed by strong fundamentals then they need not worry about selling,” Bonanza Portfolio said in a recent report.

“In transitory multibaggers or temporary situational growth stocks, investors should focus on capital protection and loss minimisation strategies and sell on pullbacks,” the brokerage added.

Rohira advises investors to rejig their portfolio to stem the bleeding in the portfolio. “The sell-off in the market in the backdrop of uncertain global and domestic events can’t be ruled out,” he explained.