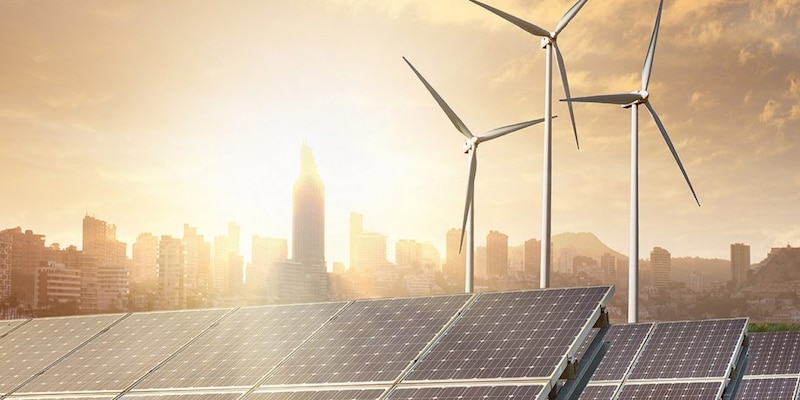 Adani Green, one of the largest renewable energy companies in India, is now more valuable than the likes of Bajaj Finserv, Avenue Supermarts, Larsen & Toubro, ITC, Maruti Suzuki, Titan, and Axis Bank as its market cap crossed the Rs 3 lakh crore level for the first time. At the last count, the stock was up over 2 percent at Rs 1,940.

Adani Green shares jumped over 3 percent on Wednesday, hitting a fresh 52-week high of Rs 1955.90. The green energy stock has been rising lately amid the focus on renewable energy transition, with the shares gaining 20 percent in the last five sessions.

The market cap of Adani Green has crossed Rs 3 lakh crore mark, making it the first Adani Group company to touch this level. The m-cap of Adani Transmission is a little over Rs 2 lakh crore.
Adani Green, one of the largest renewable energy companies in the country, is now more valuable than the likes of Bajaj Finserv, Avenue Supermarts, Larsen & Toubro, ITC, Maruti Suzuki, Titan, and Axis Bank.
The green energy and solar power developer arm of the Adani Group has enjoyed a blistering rally in 2021 as India's focus shifted to green energy. In the past one month, the stock clocked returns to the tune of 40 percent. In the last six months, the stock price has surged 100 percent.
At the last count, it was up over 2 percent at Rs 1,940. Meanwhile, Sensex was down over 0.75 percent to 60,295.
According to its provisional operational update for quarter-ended December, the company has seen a 97 percent surge in the sale of energy. It has sold over 2.50 billion units of energy in the December quarter, compared to 1.27 billion units sold in the corresponding period of the previous fiscal year. This performance, the company said, was led by both solar and wind portfolios. The company's operational capacity also improved by nearly 85 percent.
Earlier in December, it signed a public-private agreement (PPA) with Solar Energy Corporation of India (SECI). As per the deal, which is the largest green power purchase agreement, Adani Energy will supply over 4,600 megawatts of green power.
Adani Green has one of the world's largest renewable product portfolios. It builds, owns, operates, and maintains grid-connected solar and wind farm projects. Its customers include various state discoms and National Thermal Power Corporation (NTPC), and SECI. Reports highlight that the stock is an investor-favourite, though not many brokerages cover it.
Last month, Ventura Securities began coverage on the stock with a 'buy' rating at a target price of Rs 2,810. The brokerage sees a 100 percent upside in the stock in the next 24 months.
"Despite the fact that the company has seen a sharp spurt in its stock price (outperforming the broader index and peers by a wide margin), we believe there exists significant room for further upside," Ventura Securities had said in a report.
Stay updated with the latest stock market developments with our live blog
EXPLAINERS
What next for solar, wind, hydro energy in India? Experts decode