Updated : July 18, 2019 11:14 AM IST
A total of 8 initial public offerings came through the first half of this year, which is the lowest number since 2015.
Seven companies have already beaten equity benchmark indices Sensex and Nifty.
The out-performer among these companies is Neogen Chemicals, which rallied 61 percent in about two months.

A total of eight initial public offerings (IPOs) came through the first half of this year, which is the lowest number since 2015. Last year 24 companies held IPOs in the first half. And, about Rs 5,509 crore has been raised from these IPOs till now versus Rs 30,960 crore in the previous year.

Interestingly, seven companies have already beaten equity benchmark indices, Sensex and Nifty. This year, Sensex rose about 8.61 percent and Nifty50 climbed over 7 percent. While, the average return by these 7 companies year-to-date has been 28 percent, higher than what was expected. 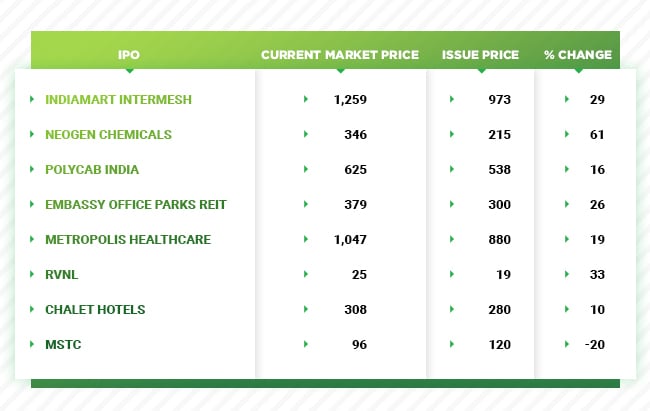 Moving on, these 7 companies floated IPOs have also surpassed their issue price, and the out-performer amongst all these firms is Neogen Chemicals, which rallied 61 percent in about two months. During FY15-18, the company reported revenue, EBITDA and PAT CAGRs of ~22 percent, 26 percent and 30 percent respectively.

These 7 companies have outperformed despite market volatility and global cues.  Most of these companies have delivered better returns than large caps, mid caps or even small caps, in a time span of only 2-3 months.

Following Neogen Chemicals, Rail Vikas Nigam and Embassy Office Parks REIT have delivered 33 percent and 26 percent returns respectively YTD, which is above their issue price. The only under-performer in this race has been MSTC which is trading negatively, 20 percent lower to its issue price.

According to an The Economic Times report, nearly six IPOs will be announced in the month of August. Sterling and Wilson Solar, Spandana Spoorthy Financial, ASK Investment Managers along with 3 others will be entering the stock market to raise capital. The expected issue size of all these 6 IPOs is pegged at Rs 9,650 crore.