Reliance Industries Ltd (RIL) has been an investors' favourite since its IPO, and why not, the stock, became the first company to hit a market capitalisation of Rs 10 lakh crore on Thursday. RIL shares also rose as much as 0.7 percent intraday today to touch a new 52-week high of Rs 1,581.25 per share on the BSE. 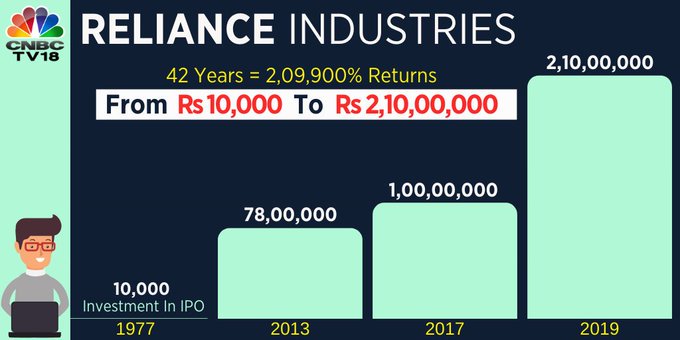 According to a Bloomberg report, the recent rise in the company's stock price has led it to eclipse BP Plc to break into an elite club of energy supermajors. The Indian conglomerate’s market capitalisation was about $133 billion, overtaking the British energy giant’s $132 billion value at the close of trading on Tuesday.

For the quarter ended September, RIL reported an 18.3 percent YoY rise in consolidated net profit at Rs 11,262 crore, while its net revenue grew by 4.8 percent to Rs 163,854 crore driven by robust growth in retail and digital services businesses.

While the bulk of its revenue comes from the energy business, it also has made wide strides in the telecom and digital service industries with Reliance Jio. It is also expanding its retail business to take on Amazon and Walmart.

In Q2, the company posted an 18.3 percent increase in its net profit to a record Rs 11,262 crore. It also announced that it will set up a new subsidiary to bring all its digital initiatives under a single entity with an equity infusion of over Rs 1 lakh crore.

HSBC also recently raised its target to Rs 1,700 per share from Rs 1,565 earlier. It added that operating trends for both telecom and organised retail remain strong and that the telecom and retail segment will drive the near-term upside potential.

It has expanded its portfolio majorly from a polyester business to refining, including manufacturing of refined petroleum products, and petrochemicals, including manufacturing of basic chemicals, fertilizers and nitrogen compounds, plastic and synthetic rubber in primary forms. It recently also forayed in the telecom business, putting immense pressure on all the other telcos.