Updated : May 14, 2020 08:17 PM IST
The report said India is mirroring the US economy and its growing dominance of a handful of companies to change the template of capitalism in the country.
Marcellus believes that these 20 PAT generating companies will continue to increase their profit share for the country from current 70 percent to 80-90 percent by FY29.

Twenty large firms in India including RIL, TCS, HDFC twins generate 70 percent of the profits, which is up from 14 percent 30 years ago, said a Marcellus Investment Managers report.

In its report titled 'Behold the Leviathan: The remaking of Indian Capitalism', it said India is mirroring the US economy and its growing dominance of a handful of companies to change the template of capitalism in the country.

It also highlighted the fact that only two or three companies accounted 80 percent of the profits for an entire sector. For instance, in paints, Asian Paints and Berger Paints are the dominating companies. In cigarettes space, it is ITC. While for trucks, Tata Motors and Ashok Leyland are the biggest manufacturers.

These companies are regarded as the leviathans, said the report. But, the real question is how did these companies reached that aisle of dominance in their respective sectors?

First, a networked economy has helped efficient companies more than the smaller ones. For example, HDFC twins have taken over regional players and entered the list of 'top 20 PAT generators', said the report. Second, smaller companies suffer more from the regulatory burden and limited resources.

Even to adapt to the cost of GST for a smaller company is far more significant than a large firm.

Third, small companies have lower source of capital which eliminates the possibility of capex. Lastly, technology acts as a barrier to entry, as small firms do not have resources for advanced technologies like artificial intelligence or Internet of Things.

Marcellus believes that these 20 PAT generating companies will continue to increase their profit share for the country from current 70 percent to 80-90 percent by FY29.

It said, "If you had invested in an equally weighted portfolio in FY09 of the 11 companies which have been added to the top 20 list of FY19, your total shareholder return CAGR would be 26 percent CAGR (FY09-FY19)." 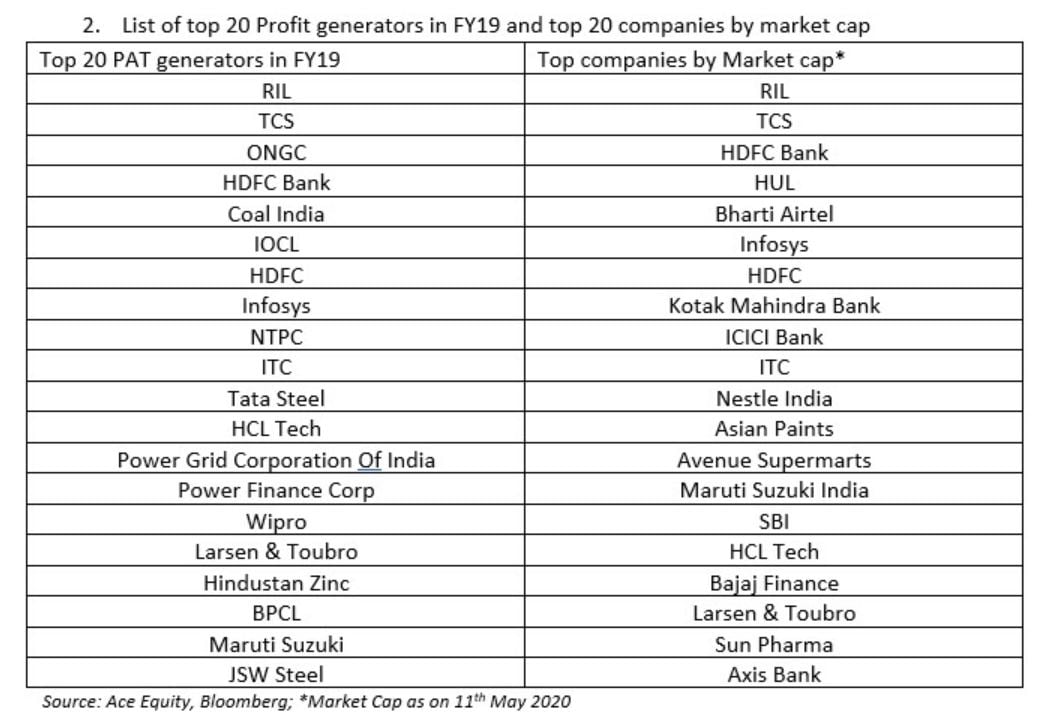 However, this report also received a few criticisms on social media platforms.

Many investors and analysts believe that this list could be misleading as most of these companies have stretched valuations right now, and any issue in the company will bring upon a huge correction in the stock, thus also declining the profit share of the country.

Some even questioned about how much of these listed companies have contributed to the total GDP of the country and why unlisted firms have not been added.