Stock Market Highlights: Indian indices ended over half a percent lower on Wednesday after a five-session rally, with losses in IT and auto stocks offsetting gains in metals and private-sector lender IndusInd Bank. The Sensex ended 345 points lower at 36,329 while the Nifty lost 94 points to settle at 10,706.

Indian indices ended around a percent lower on Wednesday after a five-session rally as coronavirus infections continued to surge, with losses in IT and auto stocks offsetting gains in metals and private-sector lender IndusInd Bank. The Sensex ended 345 points lower at 36,329 while the Nifty lost 94 points to settle at 10,706. IndusInd Bank, Vedanta, JSW Steel, Hindalco, and Dr Reddy's were the top gainers on the Nifty50 index, while Bajaj Finance, Zee, Asian Paints, Tata Motors, and HCL Tech led the losses. Sectors were mixed during the day. Nifty IT, Nifty Realty and Nifty Auto lost around 2 percent each while Nifty Metal and Nifty Pharma rose 1.5 percent and 0.7 percent, respectively.

"I would dial in some of the private banks which are still available 1-1.5 book value. Look at ICICI Bank for example, Rs 2 lakh crore in savings account, a Rs 1 lakh crore in current account, 35 percent CASA, capital raise will give it war chest, which I do not think it really needs, but that is what right now everybody is doing, all subsidiaries doing well, the retail loans which were only 40 percent in 2014 are now 65 percent of the portfolio, most of the lending to corporate is ‘A’ rated and above. Similarly for Axis Bank, maybe a notch lower than ICICI Bank, but gives me a lot of comfort in seeing the text of the book. So I will dial in some of the well-driven private banks which are available at 1-1.5 book value."

“June has seen a growth of over 5-6 percent over last June and that is because on the backdrop of a huge drop in the month of April and May which we saw in North. So I would say 5 to 6 percent, 7 percent growth in North. South continues to be a little bit behind as compared to last year.”

The Supreme Court has recalled its March 27 order that allowed the sale of BS4 vehicles after the lockdown. The apex court has slammed the Federation of Automobile Dealers’ Association of India (FADA) for committing “fraud”. The SC has also clarified that it will protect only those vehicles which have been registered with the VAHAN portal. SC has directed FADA to furnish the data of BS4 sales and has directed the government to corroborate the sales data with the information available on the VAHAN portal. The apex court noted that over 17.000 vehicles sold were not registered with the VAHAN portal.

SC, today, observed that FADA had understated the number of BS4 vehicles sold after the March 31 deadline. FADA was also warned against taking advantage of the court by “playing fraud”. The SC noted that it seemed that FADA had sold more vehicles than had been allowed by the SC and questioned how. Read more.

Just In | NCC Ltd has received five new orders totaling to Rs 1,396 crore in the month of June, 2020 and all five orders pertain to Water Division. These orders received from various State Government agencies and do not include any internal orders, the company said.

After a tepid start to the month, June saw an over 1000 points rally in Nifty during the latter half of the month, primarily fuelled by positive global sentiments and as governments across the world gradually eased the lockdown restrictions. Now that the markets seem to be in a recovery mode. Edelweiss Securities, in a recent report, has come out with a market strategy and its top large-cap and midcap stock picks to invest in.

GMR Infra share price gained over a percent in the morning trade on July 8, a day after the company said that it had completed the deal to sell 49 percent stake to France's Groupe ADP. France's Groupe ADP has infused Rs 4,565 crore, which is the second tranche of investment, in GMR Airports Limited (GAL) to conclude its deal for a 49 percent shareholding in the company, an official statement said.

Mumbai-based speciality chemicals firm Rossari Biotech will kickstart its initial public offer next week, on July 13, and end nearly four months of COVID-19-induced inactivity for IPOs in the domestic markets. The issue will open on July 13 and close on July 15. The price band is between Rs 423-Rs 425/share according to an IPO note by one of the book running lead managers, Axis Capital. The IPO will consist of a fresh issue of equity shares aggregating up to Rs 50 crore and an offer for sale component of up to 10,500,000 equity shares. The issue size is pegged around  Rs 494-Rs 496 crore.
Share:

The Federation of Automobile Dealers Association of India (FADA) is submitting a completed affidavit with details of sold but unregistered BS-IV vehicles to the Supreme Court on Wednesday, as part of its plea that registration of these vehicles is allowed beyond the original March 31 deadline, in the wake of the COVID-19 lockdown. During the last hearing in the case in June, the top court had asked FADA to furnish details of when the vehicles in its previous affidavit were sold, sales made after the lifting of the lockdown on May 3, and also update the affidavit with whether or not an entry of these sales were made on the government's e-portal, VAHAN. More here

Shares of Indusind Bank have gained over 18 percent in the last three days since the bank announced its June quarterly updates. The sentiment further turned bullish on reports that the US-based hedge fund Route One Investment Company has initiated talks to increase its stake in the lender. In intra-day deals on Wednesday, the IndusInd Bank stock jumped 10 percent in to Rs 577.8 per share on BSE. Since Monday, the stock has gained 18.5 percent. Read more
Share:

'Absolutely no!' KV Kamath on talk about taking up a government role 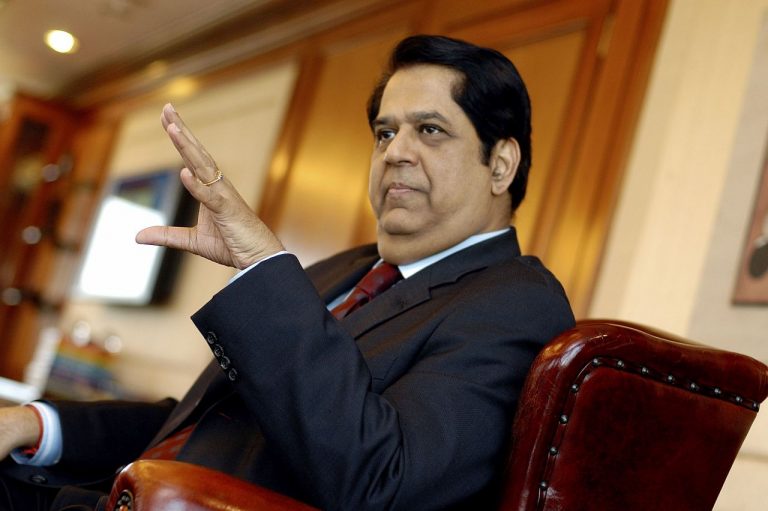 'Absolutely no!' KV Kamath on talk about taking up a government role. Get latest Business online at cnbctv18.com

Markets have recovered in the last one month after falling to multi-year lows in March and according to Nilesh Shah, MD and CEO of Envision Capital, the recovery has been largely fuelled by massive liquidity. He spoke to CNBC-tv18 about the market recovery in June, the impact of COVID going forward and outlook for the September quarter.

Earn Rs 1 lakh a month? Here's how you can save and plan your investments 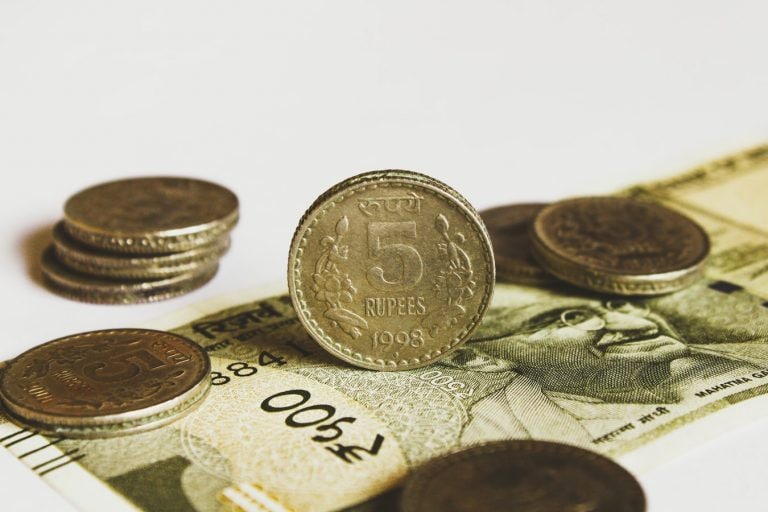 One of the basic rules of investing is to start early so that time works in favour, say experts.Get latest Personal Finance online at cnbctv18.com

Top gainers and losers at this hour 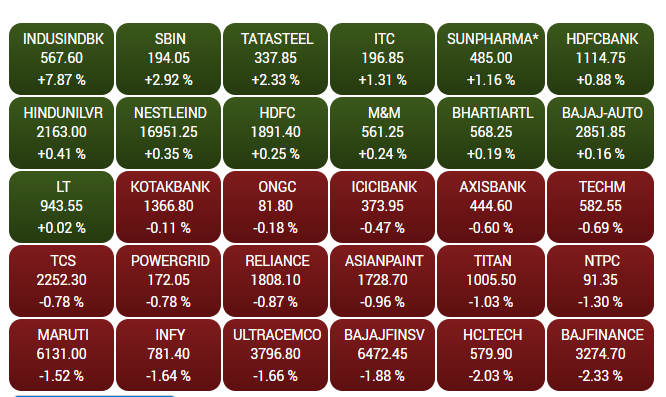 France's Groupe ADP has infused Rs 4,565 crore, which is the second tranche of investment, in GMR Airports Limited (GAL) to conclude its deal to purchase a total of 49 percent shareholding in the company, said an official statement. The GAL manages airports at Delhi and Hyderabad. On February 21, the company had announced that Groupe ADP would acquire 49 percent stake in it for 10,780 crore. In its first tranche of investment, Groupe ADP had paid Rs 5,248 crore on February 26 to the GAL to purchase 24.99 percent in it.

IndiGo, the largest airline in India, has been known to hire pilots in bulk given its expansion plans comprising over 600 incoming aircraft and an ambition for aggressive international rise. However, the unprecedented disruption caused due to COVID-19 pandemic seems to have forced the airline to hit the pause button on hiring and inducting pilots. The airline is unlikely to induct new batch of pilots before early 2021 as around 400 junior first officers and 300 senior pilots—who are in transition—are still in line to complete their respective training and flying hours, CNBC-TV18 has learnt.

US formally notifies UN of decision to withdraw from WHO

The Trump administration has formally notified the United Nations of its decision to withdraw the US from the World Health Organization, officials said, breaking off ties with the global health body amid the expanding coronavirus pandemic. The US has accused the WHO of siding with China on the outbreak of the virus, which originated in the Chinese city of Wuhan late last year, alleging the health body misled the world resulting in deaths of over half a million people globally, including over 130,000 in America.

Among brokerages, CLSA has a 'sell' call on Titan while Morgan Stanley's top pick in the telecom space is Bharti Airtel. Here are the top brokerage calls for the day: Get latest Market online at…

Rupee Update: The Indian rupee was trading flat at 74.93 per dollar after opening marginally higher at 74.86 per dollar. The rupee closed at 74.94 against dollar on Tuesday. Just In | Lupin has voluntarily recalled its Metformin Hydrochloride Extended-Release tablets USP, 500 mg & 1,000 mg products in the US. This recall is being conducted out of an abundance of caution in line with the ongoing interaction with the U.S. Food and Drug Administration on NDMA impurity levels, the company said.

SBI or State Bank of India, the country's largest lender by assets, on Wednesday announced a reduction in its benchmark lending rates across shorter tenors. The bank said its marginal cost of funds-based lending rate (MCLR) will be reduced by 5-10 basis points (5-10 percentage point), and the new rates will take effect on July 10. From July 10, the MCLR will stand reduced to 6.65 percent for the three-month tenor, according to SBI's statement.
Share:

Cabinet likely to approve extension of EPF support for business, workers for 3 months

Union Cabinet is likely to approve the extension of EPF support for business and workers for 3 months, sources informed CNBCTV-18. The government under PM Garib Kalyan Package had announced EPF support of 24 percent (12 percent of employees and employers share) for businesses and low wage workers till August 30.