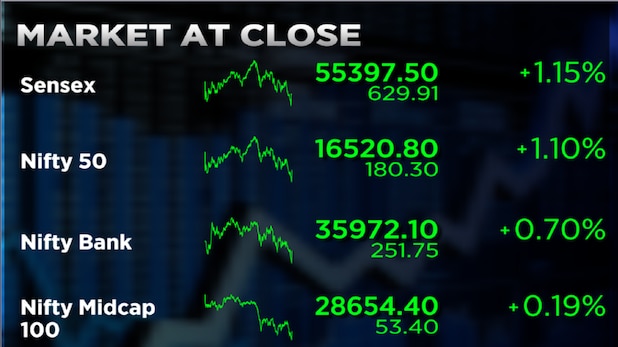 Stock Market Highlights: Indian equity benchmarks BSE Sensex and NSE Nifty50 continued to rise for a fourth straight session on Wednesday led by gains across sectors, as strong earnings in the US helped investors take their minds off concerns about slowing growth due to steep hikes in COVID-era interest rates. Broader markets also strengthened, with the Nifty Midcap 100 and Smallcap 100 indices rising 0.2 percent and 0.8 percent respectively. Investors awaited financial results from blue-chip companies including Wipro and IndusInd Bank due later in the day.

Thank you, readers! That's all from CNBCTV18.com's live market coverage on July 20, 2022. Stay tuned for other updates on our website: CNBCTV18.com.

Download our mobile app for Android and iOS platforms

On FMCG
I think all these companies have enough products in their portfolios to survive the slowdown and get out of it very strong. People buy, institutional investors love to buy these stocks in anticipation how the next four, eight quarters are going to be not just the next one quarter. So that's where they are poised and it could offer you a very good entry point, at some point in time between now and the September earnings.

Rupee hits record closing low of 79.99 vs US dollar

Here are some highlights:

--34 Nifty stocks in the green

Limited downside in IT: Ruchit Jain

Ruchit Jain of 5paisa.com suggests holding Wipro shares. "You can even look to average out current levels or if you want to put more money within the IT space, Infosys could be a better option where you can invest money at the current market price," he tells CNBC-TV18.

Continue to hold on to Axis Bank: Ruchit Jain

Ruchit Jain of 5paisa.com said that after a price wise correction the stock is now showing a pullback move and retracing the previous down move. "This retracement levels resistances are coming around Rs 740. So at least know in short term, we can expect levels around Rs 740-750 where again, you can investor can take a review on the stock. But for now continue to hold on to Axis Bank."

Here are two recommendations by Sameet Chavan of Angel Broking:

Its revenue, however, increased 8.4 percent to Rs 644.5 crore compared with the corresponding period a year ago, according to a regulatory filing. Its EBITDA increased 4.7 percent to Rs 172.8 crore.

Here are two recommendations by Aditya Agarwala of Invest4edu