Indian shares ended with strong gains on Monday after exit poll results predicted the BJP-led National Democratic Alliance to return to power with a comfortable majority. The Sensex settled over 1400 points higher at 39,352 led by financials and Reliance Industries and midcaps, while the Nifty also ended up rising over 400 points, climbing above 11,800. Here are the main highlights from the stock markets today:

Benchmark indices ended Monday's session posting biggest single session gain since a decade as exit poll results predicted a comfortable win for the BJP-led NDA government. At close, the Sensex was up 1,421.90 points, or 3.75 percent, to trade  39,352.67, while the NSE Nifty50 was up 421.10 points, or 3.69 percent, at 11,828.25. Indiabulls Housing, IndusInd Bank, Adani Ports, SBI and Tata Motors were among major gainers on the Nifty, while losers were Dr Reddy’s Labs, Zee Entertainment, Bajaj Auto, Tech Mahindra and Infosys. All the sectoral indices ended in green led by PSU banks, infra, auto, energy, FMCG, metal and pharma.

Shares of Kirloskar Oil Engines surged over 16 percent to a one-month high of Rs 183.95 today after the company posted an over-twofold year-on-year rise in net profit for the March quarter at Rs 921 million. The company's operating margin expanded to 16.21 percent in Jan-Mar from 9.92 percent a year ago, while revenue came in at Rs 8.5 billion as against Rs 7.9 billion in the year-ago period. Gains in the stock were backed by volumes. So far today, 168,280 shares of the company were traded on NSE, more than 11 times the six-month average daily volume of 14,937 shares. At 3.10 pm, shares of the company were up 9.8 percent at Rs 173.35.

Corporation Bank down over 7% on record loss in January-March

Shares of Corporation Bank fell over 7 percent today to hit a six-month low of Rs 23.80 as the lender posted record loss of Rs 65.81 billion in the March quarter, as provisions for bad loans jumped more than ten-fold on quarter and nearly double from the corresponding quarter a year ago. In January-March 2018, the lender had posted a loss of Rs 18.38 billion, while for the December quarter, it reported a net profit of Rs 605.31 million. At 2.04 pm, shares of Corporation Bank traded down 2.7 percent at Rs 24.95.

Gold prices dipped 1.21 percent to Rs 31,407 per 10 gram in futures trade Monday as speculators reduced exposure amid weak domestic cues. On the Multi Commodity Exchange, gold for delivery in June contracts eased by Rs 384, or 1.21 percent, to Rs 31,407 per 10 gram in a business turnover of 7,567 lots. In the domestic markets, a strong rupee against the US dollar dented the safe-haven sentiments of the precious metal, say reports. Gold prices were trading marginally up by 0.01 percent to $1,275.80 an ounce in New York. (PTI) 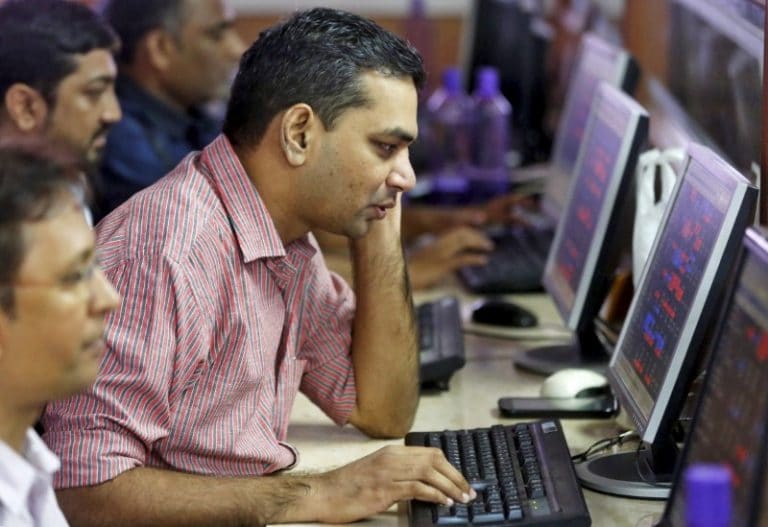 Indian markets on Monday opened with their biggest gain since May 16, the counting day of the 2014 general elections.

Shares of APL Apollo Tubes soared 10 percent as the company's consolidated net profit for the March quarter surged 44.7 percent on year to Rs 617 million. The company's revenue from operations for the quarter jumped 37.8 percent to Rs 20.94 billion, and total expenditure, including finance cost, was at Rs 20.02 billion compared with Rs 14.54 billion a year ago. The company said it will pay a dividend of Rs 14 a share. However, the company's operating margin contracted by 12 basis points, while the cost of materials consumed rose 28.2 percent on year to Rs 17.89 billion.  So far today, 76,169 shares of the company have changed hands on the NSE, three times the daily average of 25,081 shares.

Shares of NIIT were up nearly 2 percent at Rs 102.75 as the company has received Rs 20.20 billion from the sale of its 23.10 percent stake in subsidiary NIIT Technologies to Hulst B.V., a company indirectly owned by Baring Private Equity Asia.

Shares of Indiabulls Housing Finance rose nearly 8 percent, the top gainer on Nifty 50, as the National Democratic Alliance's likely return with a strong majority would mean a continuity in policies. NDA's likely win indicates a chance for a quick fix such as a new liquidity window for the non-banking financial sector, which may lead to the overall economy getting back on the growth path, said an analyst. Also, there is now a rising hope with investors that there will be quick clearances from the authorities on the proposed plan of merger of Indiabulls Housing Finance with Lakshmi Vilas Bank, said another analyst. Shares of Indiabulls Housing Finance were up 6.5 percent at Rs 770.30, while those of Lakshmi Vilas Bank were up nearly 5 percent at Rs 74.35.

Shares of Welspun Enterprises rose 10 percent intraday Monday after it received provisional completion certificate for commencing commercial operation of the Dewas Industrial Water Supply Project with effect from April 30, 2019. Shares quoted at Rs 118.30, up by 9.33 percent at 11.51 am on NSE.

#CNBCTV18Market | Sensex is now up more than 950 points, its biggest gain in 10 years; Nifty less than 200 points away from record high

Reliance Industries surges 5% in line with gains in broader market

Shares of index major Reliance Industries surged over 5 percent today on value buying in the stock, and in line with the broader market. So far this month, shares of the company declined in seven sessions, during which time, the stock had lost nearly 6 percent. Market participants believe, on the back of exit polls outcome, that with the expected return of the Bharatiya Janata Party-led National Democratic Alliance at the Centre, focus will be on the recovery of demand that will boost the company's retail operations. Brokerage firm Nomura Financial Advisory Services said that the focus of the government will remain on rural inflation, infrastructure spending, and streamlining of goods and services tax, among other key priorities. At 10.38 am, shares of the company were up 3.7 percent at Rs 1,314.40. 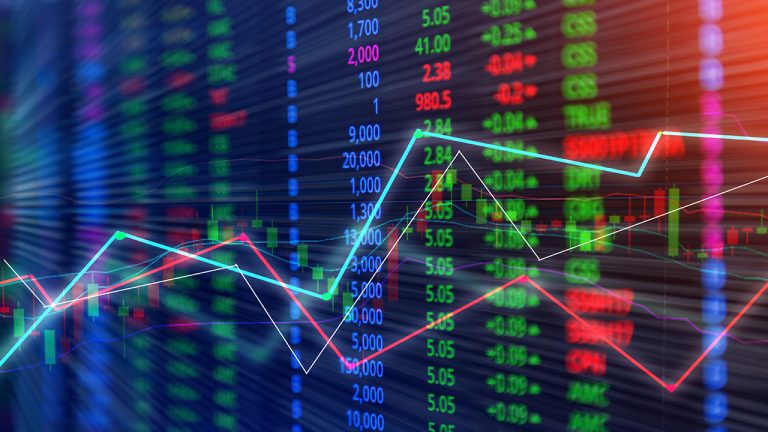 Gold steadied on Monday, trading near a two-week low hit in the previous session, as strong US economic data underpinned the dollar amid geopolitical as well as trade tensions. Spot gold was broadly unchanged at $1,276.79 per ounce at 0321 GMT. U.S. gold futures were 0.1% higher at $1,276.40 an ounce. The metal fell to a two-week low of $1,274.51 an ounce on Friday after data showed United States consumer sentiment jumped to a 15-year high in early May amid growing confidence over the economy’s outlook. (Reuters)

Shares of Graphite India were up nearly 11 percent at Rs 359.40 after the company reported a 4.1 percent year-on-year rise in consolidated net profit for the March quarter to Rs 5.62 billion. Profit could have been much higher if adjusted with the accrued one-time loss of Rs 550 million during the quarter. Revenue from operations for the quarter rose nearly 28 percent to Rs 16.93 billion. However, the company's operating margin contracted to 51.03 percent in January-March from 54.42 percent a year ago, while total expenditure, including finance cost, was at Rs 8.56 billion compared with Rs 6.18 billion a year ago.

Shares of Larsen & Toubro surged 5 percent to hit a near six-month high of Rs 1,434.90 today after exit polls indicated that the National Democratic Alliance is set to sweep the Lok Sabha elections on May 23, leading to optimism for pick-up in order inflows for the company. L&T secures a large part of its orders from the government and market participants expect a surge in government orders in the infrastructure segment post the elections. Shares of Larsen & Toubro were up 5.2 percent at Rs 1,432. Indian shares are expected to rally on Monday after the exit polls of the 2019 Lok Sabha elections projected the Bharatiya Janata Party (BJP)-led National Democratic Alliance (NDA) to win with a comfortable majority.

Shares of Bajaj Auto corrected by 3 percent today as the outlook for the company's operating margin for 2019-20 (April-March) remained weak, given subdued domestic demand and a likely decline in export demand. Brokerage house Prabhudas Lilladher expects margins to remain under pressure as it expects the company to hike prices to pass on costs related to a shift to Bharat Stage-VI emission norms at a time when demand remains weak. Brokerage firm IDBI Capital Markets expects the company's domestic motorcycle sales to decline 2 percent in 2019-20 (April-March) mainly on account of a higher base in the commuter segment and weak buyer sentiment. At 10.15 am, shares of Bajaj Auto were down 1.6 percent at Rs 2,992.

Volatility gauge India VIX slumped 30 percent today as exit polls suggested that the Bharatiya Janata Party-led National Democratic Alliance is set to sweep the General Elections. The slump in India VIX was expected by most analysts, as the event risk surrounding the election has receded. At 10.18 am, India VIX  was down 18.25 percent at 22.95 points, while the Nifty 50 was at 11690.80, up 283.65 points, or 2.49 percent.

#4QWithCNBCTV18 | After United Breweries' management indicated lower volume growth for Q4FY19, street looking at a number in the range of 9-11%. Also, margin expected to rise 140 bps on a like-to-like basis pic.twitter.com/RuZXIx800a

Shares of Adani Group companies surged today as the exit polls suggested that the ruling Bharatiya Janata Party-led National Democratic Alliance would return to power at the Centre.  According to the average of estimates of 11 exit polls tracked by Cogencis, the NDA is seen bagging 304 seats, while the Congress-led United Progressive Alliance is seen winning 119 seats. The Gujarat-based group is perceived to be close to the BJP. At 9.28 am, shares of Adani Transmission, Adani Power, Adani Enterprises, Adani Green Energy, Adani Gas, and Adani Ports and Special Economic Zone were 4.4-13.3 percent higher. (Cogencis)

Nine of the 10 most valued firms together added Rs 82,379.79 crore in market valuation last week, with banking counters like HDFC Bank and Kotak Mahindra Bank stealing the show. During the last week, the BSE Sensex gained 467.78 points, or 1.24 per cent to close at 37,930.77 on Friday. Led by the positive sentiment in the broader market, nine of the top-10 frontline companies witnessed rise in their market capitalisation (m-cap) for the week ended Friday. TCS was the only company to register a decline in its market valuation. READ MORE