The Nifty-50 Index has gained 1.8% this week while the Nifty-Mid Cap 100 Index and BSE Small Cap Index have gained 1.9% and 1.4%, respectively. The market remained buoyant on the earlier-than-expected deployment of Covid-19 vaccines, impending US fiscal stimulus and decreasing domestic Covid-19 cases. FIIs flows though strong have moderated some bit from the previous week. The average daily FII flows in the first four days of the week was around Rs.3200 crore. Going forward expect FII flows to slowdown in the next two weeks as we head towards Christmas vacation.

Markets could turn volatile next week due to the monthly expiry and lesser participation from FIIs. We expect Nifty50 to consolidate between 13,000 & 14,000 levels by the end of this month.

The Nifty has closed above 13,700 once again which is a positive sign. We continue to remain in bullish territory as long as 13.400-13.500 holds. Any intraday correction can be utilized to accumulate long positions for higher targets. It is imperative stop losses are strictly maintained as a correction might stir the volatility levels.

Accenture’s Strong Earnings Lead IT Stocks Higher; Nifty IT Up Over 1%

All Nifty IT Stocks Close In The Green; Infosys, Mphasis, Wipro Top Gainers

Stock Market Highlights | Indian benchmark equity indices, Sensex and Nifty ended Friday's choppy session a little higher. The Sensex gained 70.35 points or 0.15 percent to close at 46,960.69 while the Nifty ended at 13,760.55, up 19.85 points or 0.14 percent. Broader indices underperformed as Nifty Midcap100 and Nifty Smallcap100 ended over 0.2 percent lower each.

Among sectors, The Nifty IT and Nifty Pharma rose the most, up 1.5 percent and 1.3 percent, respectively while Nifty FMCG also added 0.3 percent. However, the banking and financial services index ended the day in the red. Nifty Metal also lost around 0.3 percent.

Antony Waste Handling Cell, the Municipal solid waste services provider, has fixed the price band for its initial public offering (IPO) at Rs 313-315 per share. Get latest Market online at…

HG Infra Engineering | The company has received LoA from NHAI for a project in Rajasthan worth Rs 1,198.93 crore.

KNR Construction | The company's board has approved a bonus issue in the ratio of 1:1.

Market Update | Indian indices pared morning losses to trade flat as selling in banking and financial stocks were countered by gains in IT and Pharma stocks. Sensex was trading 8.57 points or 0.02 percent higher at 46,898.91 while the Nifty inched 4.20 points or 0.03 percent higher at 13,744.90 at 2:10 pm. Infosys, HCL Technologies, Bajaj Auto and TCS were the top Sensex gainers while IndusInd Bank, ONGC, and HDFC twin were the top laggards.

Strides Pharma Science | The company has received US FDA approval for Oxybutynin Chloride tablets used for the treatment of overactive bladder and urinary conditions.

Lastly, a buy call on Sun Pharmaceutical Industries, it has gone into the consolidation phase, once again around 11-12 trading sessions old. But the undercurrent is distinctly bullish, long term I would say we are at Rs 524, we are heading towards Rs 900 couple of years around the line, but I am anticipating an upwards breakout. So buy Sun Pharmaceutical at Rs 570 stop loss Rs 555 target Rs 600.

Burger King India shares hit a 10 percent lower circuit for the second consecutive day in a row. The stock price of the quick-service restaurant chain was locked at Rs 161.45 per share on BSE, due to profit booking.

On Thursday, the stock had slipped 10 percent to Rs 175 per share on the NSE. This came after the stock witnessed a spectacular listing earlier this week.

However, despite the fall, Burger King shares are 169 percent up from its listing price.

In the case of Burger King, the valuation was unrealistic post-listing, so some amount of correction was expected, said Sudip Bandyopadhyay, Group Chairman, Inditrade Capital.

On the other hand, Mrs Bector's Food Specialities' public issue was subscribed 198 times on Thursday. Analysts do not expect any impact of profit-taking in the Burger King shares on Mrs Bector Food's listing. Read more here.

Steel Strips Wheels | The company has bagged export orders of nearly 51,000 wheels for EU market, to be executed in the month of January and February 2021 from its Chennai plant. Orders of similar capacity are anticipated from the same customer base as businesses continue to recover rapidly, it said. The company expects to grow its exports by over 40 percent in 2020-21.

COVID has played a role of catalyst for the entire Indian corporates. The kind of cost structures, efficiencies that we are seeing in the last 6 months is amazing and a lot of that will stay in the next few quarters also. So, if I think about the next 12-18 months, finally we are in for a good earnings growth from many companies across the sectors and from that perspective we will see this rally much broad based, much stronger over a period of next 12-18 months.

For the last 5-7 years we have completely avoided investing in the PSU stocks. The last 5-7 years we have seen humungous amount of price destruction or the wealth destruction that has happened with the PSU companies. Everything is good at a price and bad at a price and probably at a price where they are today there is very deep value. So as a trade maybe there is some profit to be made, but if I think about on a secular way, if I have to take a 3-5 years view, whether I see earnings growing significantly, do I see a paradigm shift in terms of their of operations, I am not very sure at this point in time.

The race for DHFL is now down effectively to 2 bidders - Piramal Group and Oaktree Capital. The Creditors of Company (CoC) are set to meet today (December 18) to evaluate the bids with voting expected to begin next week. All suitors will make presentations to the CoC today while SBI Capital will make present evaluation matrix to the committee today. Piramal is likely to have an edge over Oaktree Capital because it offers a higher cash up front and also it is easier to take over being an Indian entity. However, Oaktree Capital has been looking at ways to make its offer more attractive. They have offered to drop some of the conditions that were seen as hindrances. According to sources, Oaktree Capital was mulling legal action against CoC for alleged discriminatory treatment. However, so far they have not taken any concrete action. For more details, watch video.
Share:

Momentumisers: DLF up 25% in December; here’s why stock is gaining momentum 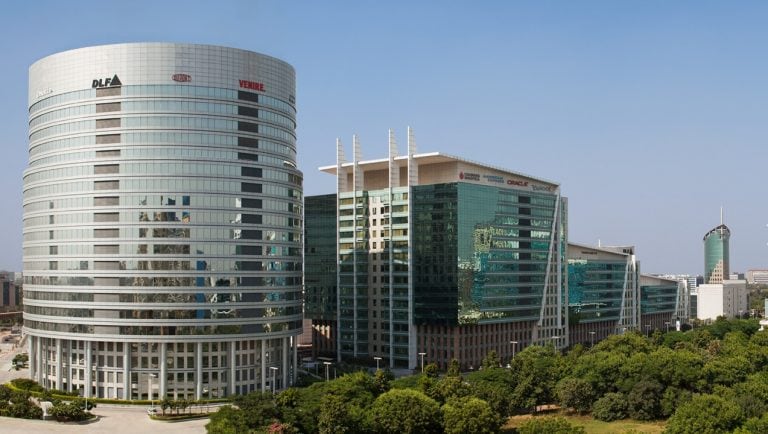 Real estate major DLF is up around 25 percent in December and just 12 percent away from its 52-week high of around Rs 266. In the special segment ‘Momentumisers’, CNBC-TV18’s Sonal Bhutra gets details…

IT shares outperformed in a weak market on Friday after better than expected earnings by US technology firm Accenture boosted hopes for the Indian IT industry. The sentiment was also lifted after the IT company raised its full-year sales forecast. Accenture has forecast the fiscal year 2021 revenue growth between 4 percent and 6 percent, above its previous estimate of growth between 2 percent and 5 percent. Meanwhile, it expects second-quarter revenue to be between $11.55 billion and $11.95 billion, above the Wall Street estimates of $11.35 billion. The Nifty IT index was up over 1.5 percent as against a 0.3 percent fall in the benchmarks. All constituents of the index were also trading in the green. Coforge rose the most, up 2.5 percent followed by Infosys and HCL Tech, up over 2 percent each. Meanwhile, Mphasis, TCS, L&T Infotech, and Wipro also rose over a percent each.
Share:

The Supreme Court has reserved its verdict in the Tata-Mistry case. Both sides have completed their arguments in the case. On Thursday, Tata Group offered to buy out Mistry family's 18 percent stake in Tata Sons at a fair value if required. However, Tata Group also lashed out at Mistry camp accusing them of trying to break-up the group by sleight of hand. Senior advocate Harish Salve appearing for Tata Sons said that Article 71 of Articles of Association clearly provides for a buyout. Salve said Tata Sons would be willing to buy out the 18.37 percent stake of Shapoorji Pallonji Group in Tata Sons provided it is held that Tata Sons acted in an oppressive manner. Watch the video for more.
Share:

The DAC, in its meeting on Thursday, held under the Chairmanship of Raksha Mantri Rajnath Singh approved Capital Acquisition proposals of various Weapons/Platforms/Equipment/Systems required by the Indian Army, the Indian Navy and the Indian Air Force at an approximate overall cost of Rs 28,000 crore. Read more here.

Among brokerages, CLSA upgraded L&T Tech to outperform and also raised its target price while Morgan Stanley is overweight on ICICI Bank. Here are the top brokerage calls for today:Get latest Market…

Nomura expects rupee to strengthen against the dollar, said Rob Subbaraman, Chief Economist, Asia Ex-Japan on Friday. “We have a forecast of a very strong India recovery next year, we forecast almost 10 percent real gross domestic product (GDP) growth for India next year,” he said in an interview with CNBC-TV18. In terms of dollar index, he said, “Our view at Nomura is that it still has a room to weaken further and we think in particular as we look into 2021, in the first quarter of 2021, it is going to be a sharp dive down in the dollar.” More here
Share:

Tata Consultancy Services (TCS) share price added nearly 2 percent in the early trade on December 18 as company's Rs 16,000 crore share buyback offer opened for investors today. TCS has decided to buyback upto 5,33,33,333 equity shares and the floor price for this offer has been fixed at Rs 3,000 per share. The offer, as per the schedule, will close on January 1, 2021. This is the third share buyback offer from the company after August 2018 and May 2017. Experts advised investors to tender their shares in the buyback offer if they want to hold for less than one year period given the good price offered by the company.

#Rupee opens flat against the US #dollar pic.twitter.com/b8Max6deIN

Bitcoin rose to a record high on Thursday, just a day after passing the $20,000 milestone for the first time, amid surging interest from larger investors. The world's highest-profile cryptocurrency jumped 10.5 percent to $23,655, taking its gains this year past 220 percent, buoyed by demand from larger investors attracted to its potential for quick gains and perceived inflation-hedging qualities. Smaller coin ethereum, which often moves in tandem with bitcoin, was trading 1.75 percent higher. With bitcoin's supply capped at 21 million, investors see in the cryptocurrency a hedge against the risk of inflation as governments and central banks turn on the stimulus taps in response to the COVID-19 pandemic.
Share: