"Equity market has been consolidating under fear of losing its traction of economic growth recovery. Positive US job data and climb in fourth-quarter US GDP to 4.3% helped to reduce the gravity of the contraction. On the domestic front, high-frequency data suggests good economic activity in Q4FY21 and results will be announced from April. The second wave of Covid and high valuation will maintain volatility in the near term."

- Sensex & Nifty Fall Nearly 2% Each For The 2nd Straight Week

- Market Ends The 1st Day Of April Series On A +ve Note; All Indices Higher

Indian shares rebounded from near two-month lows to settle over 1 percent higher on Friday, driven by gains in beaten-down bank and metal stocks. Also boosting sentiment, Asian shares rebounded on optimism about a global economic recovery. The Sensex ended 568 points higher at 49,008 while the Nifty rose 182 points to settle at 14,507. Both the indices had fallen more than 3 percent in the last two sessions. Meanwhile, broader markets were also positive for the day with the midcap and smallcap indices up 1-1.5 percent. On the Nifty50 index, Tata Steel, Bajaj Finserv, Titan, Asian Paints, and Tata Motors were the top gainers while UPL, Eicher Motors, Powergrid, ITC and Hero Moto led the losses.

The much-awaited Bhushan Power & Steel Limited (BPSL) resolution may close on Friday after a delay of over three years, with JSW Steel expected to transfer Rs 19,350 crore to the former’s lenders, CNBC-TV18 has learnt. “We are expecting JSW to transfer the money for Bhushan Power by Friday (today). We are not expecting any delay. Banks have fully provided for this account by now, so whatever amount we are getting will show as profit straightaway,” said the head of a large public sector bank with exposure to BPSL.

The deal, however, comes with riders. CNBC-TV18 had earlier reported that JSW Steel had proposed to conclude the transaction at the earliest on the condition that banks provide it indemnity in case of an adverse ruling from the Supreme Court, where the Bhushan Power case is still being heard. On March 5th, Bhushan Power’s lenders voted in favour of accepting the condition to return the entire sum to JSW Steel in case the apex court ruled against it, CNBC-TV18 had reported. More Here

Christian Sewing, chief executive officer of Deutsche Bank, is willing to give up his role overseeing the investment bank in the foreseeable future, a person with knowledge of the matter said on Friday. The person, speaking on condition of anonymity, said Sewing never intended to permanently keep the job that he added to his duties in an overhaul in 2019. A spokesman for the bank declined to comment. Sewing has come under pressure from regulators to relinquish day-to-day oversight of its sprawling investment bank, Reuters reported in January.
Share:

The skyrocketing prices of oil and commodity are pressuring margins of companies that had grown used to low input costs. But Gautam Duggad of Motilal Oswal believes financial companies will not be impacted by this commodity cost inflation. Speaking in an interview to CNBC-TV18, he said, “Banking and financials, which makes 40 percent of the index and almost 30 percent of the Nifty earnings, don’t directly get impacted by rising commodity cost," Duggad, who is the head of research-institutional equities at Motilal Oswal Financial Services said. However, he added, there are sectors like autos, consumer staples, consumer durables and to an extent cement that may see some trimming of margins. But, I don’t think Nifty will have a significant impact because of commodity cost, he said. More here Compucom Software share price rose nearly 10 percent in the early trade on March 26 after it won a tender worth Rs 66.99 crore. ".... has won a tender and received a letter of acceptance for supply and installation of computer systems, interactive panel, printer, UPS and networking and electrification, etc. in 525 government schools with 5 years on-site comprehensive warranty for integrated scheme for computer education and information and communication technology at schools on BOOT basis from RISL worth Rs 66.99 crore approximately," company said in the release.

The Rs 453 crore initial public offering (IPO) of causal dining restaurants chain Barbeque Nation Hospitality was subscribed 2.98 times so far on March 26, the final day of bidding. Investors have put in bids for 1.48 crore equity shares against the offer size of 49.99 lakh shares with retail investor leading. The reserved portion for retail investors has been subscribed 11.71 times and qualified institutional buyers (QIBs) 1.48 times. Meanwhile, non-institutional investors submitted bid for 21 percent of its reserved portion and the employees' part was bid 86 percent.
Share:

Tata group stocks rose up to 6 percent after Supreme Court rules in favour of Tatas against Mistry. The Apex Court set aside the NCLAT order restoring Cyrus Mistry as executive chairman of the Tata Group and allowed the appeals filed by Tata Group. The court set aside the order of December 17, 2019, which had allowed the reinstatement of Cyrus Mistry as Tata Sons chairman. Among stocks, Tata Steel and Tinplate Company of India rallied 6 percent each while Tata Motors, Tata Power, and Tata Communications were up 3-5 percent. Tata Chemicals and Tata Coffee also rose around 2 percent each.
Share:

IT and pharma good for investment; Reliance can rise to fresh high, says Goldilocks’ Gautam Shah

Gautam Shah, founder and chief strategist at Goldilocks Premium Research said that he expects things to get back on track in the second half of April. On investments, he said that IT and pharma are looking good. “Stocks in the banking space, autos and capital goods are on the weaker side and there could be some opportunities on the short side. However, on the buy-side, we are more concerned about the defensives. IT, pharma and FMCG could standout and probably the places where investors can hide," he added while speaking to CNBC-TV18. More here
Share:

Even though the number of COVID-19 cases is increasing, Mahesh Patil, Co-Chief Investment Officer at Aditya Birla Sun Life AMC believes the government may not go in for a major lockdown. “The second wave of COVID-19 – you might see a number of cases accelerating in the next couple of weeks or months. However, while the number of cases may rise, I don’t expect the government to go in for a major lockdown,” he mentioned in an interview with CNBC-TV18. The government’s overall ability to tackle this pandemic and the protocols are well set. “The fatality rate is also lower than what it was in the first wave. The vaccine drive is getting into full speed. So in the next one-two months, we should be fine,” he said. More Here

Zydus Cadila has reduced the prices of Remdesivir, a drug used to treat COVID-19 by over 65 percent. Explaining the rationale behind the price reduction, Dr. Shravil Patel, MD of Zydus Group said that they wanted to make the drug affordable. “Our purpose on this is very simple – in this particular therapy, we know that this is one of the therapies that is used very frequently for people who are into moderate to severe conditions. If this drug is working as it is committed to be, then we wanted to make sure that we make it the most affordable,” he said in an interview to CNBC-TV18. Patel also said that ZyCOV-D, which is a 3-dose vaccine, has moved to phase-III trials and they are on track to file the vaccine in Q1FY22. More here

Godrej Properties sells more than 275 residences worth Rs 475 cr in one day at the launch of Godrej Woods in Noida pic.twitter.com/9fJY0Mq2Vz

Global shares bounced back on Friday, with Asian stocks recovering from a three-month low, as investors focused more on optimism about the global economic recovery than rising tensions between the West and China. European stocks look set to open higher, with Euro Stoxx futures rising 0.8% and Britain’s FTSE futures gaining 0.61%. MSCI’s ex-Japan Asia index rose 1.43% after hitting a near three-month low on Thursday, as the Shanghai Composite Index gained 1.53%, snapping a three-day losing streak. On Thursday, Chinese shares fell near a three-month low hit earlier in the month. The European Union joined Washington’s allies this week in imposing sanctions on officials in China’s Xinjiang region over allegations of human rights abuses, prompting retaliatory sanctions from Beijing. Japan’s Nikkei rose 1.47% after Wall Street shares staged a rally, driven by cheap, cyclical stocks that have been battered by the pandemic. Here are the latest updates in the Tata Sons versus Cyrus Mistry case from the Supreme Court todayGet latest Business online at cnbctv18.com

Brokerage firm CLSA has given a 'buy' rating for Max Finance, stating that the company has been a consistent market-share gainer. CLSA has set a price target of Rs 1,225 for the stock. The report mentions that “the Axis Bank deal to purchase a stake in Max Life Insurance will be transformative as the bank has also become a promoter and will add all-around value via product innovation, branding, and sharper distribution focus and governance inputs”. The company’s business margins have increased to about 25 percent in nine months of FY21 and the goals are to maintain the value of new business margins in the near term and expand in the medium term. Max's digital offering is strong, making it the largest term-life player among web aggregators, states CLSA. More here

Shares of Wabco India surged 20 percent on Friday as the company received a robust response for its offer-for-sale (OFS). The stock rose as much as 20 percent to its day's high of Rs 6,777.60 per share on the BSE. As per the BSE filing, the company announced that it will exercise an oversubscription option to the extent of 6.86 lakh shares in addition to the base offer size. The base issue size of the OFS is 9.10 percent or over 1.72 million equity shares, with a green-shoe option to retain over-subscription of 9.10 percent or over 1.72 million shares. More here
Share:

Brokerage firm CLSA is bullish on Tech Mahindra as it sees a 15 percent margin feasible for the IT major. The brokerage maintains a 'buy' call on the stock with a target at Rs 1,180 per share. “The company also shows confidence to hold the FY22 earnings before interest and taxes (EBIT) margin at 15 percent despite headwinds from an impending salary hike, resumed hiring, and likely transition costs for large deals,” stated the report. CLSA noted that its analysis indicates that this is feasible if attrition costs remain in control. More here 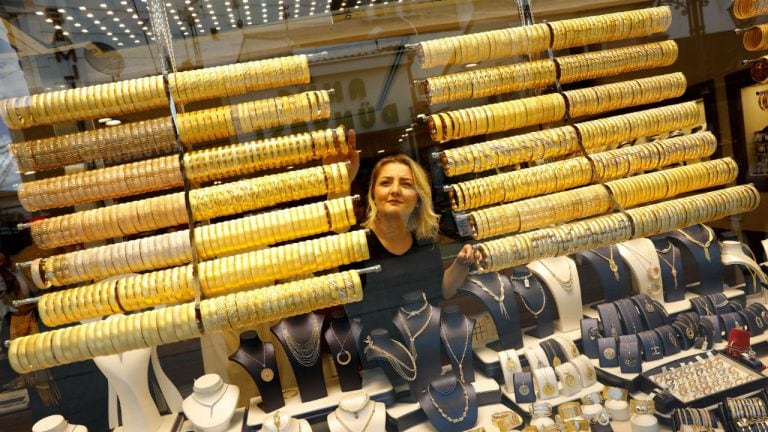 Bajaj Auto | Bajaj Auto and PIERER Mobility AG are strengthening their strategic cooperation in the development of electric products in the two-wheeler sector to meet the growing demand for innovative e-mobility concepts.

Shares of Hathway Cable and Datacom plunged 8 percent while that of Den Networks declined over 6 percent in early trade on Friday after the promoter entities of these companies announced offloading of shares via offer for sale (OFS) to comply with the minimum public shareholding norms.

Meanwhile, promoter entities of Den Networks - Jio Futuristic Digital Holdings, Jio Digital Distribution Holdings and Jio Television Distribution Holding - propose to sell up to 5.54 crore equity shares or 11.63 percent of the total issued and paid-up equity share capital of the company on March 26, 2021 and March 30, 2021. The floor price is fixed at Rs 48.50 per equity share.

Market expert Anand Tandon expects to see some kind of volatility in the stock market in the near-term. "You still have to look at the longer-term to be able to make sense of the market. Near-term it is likely to remain very volatile,” he said in an interview with CNBC-TV18. According to him, it is always almost difficult to figure out what causes a particular price move.

Shares of Suryoday Small Finance Bank made a tepid debut on the bourses on Friday. The stock listed with a discount of 4.2 percent at Rs 292 per share on the NSE as against the issue price of Rs 305 per share. On BSE, it was listed at Rs 293 apiece, down 3.9 percent.