Stock Market Highlights: Indian indices ended in the green on Monday after swinging in between gains and losses. The Sensex ended 60 points higher to 38,417 while the Nifty50 index ended at 11,375, up 41 points. Broader markets ended mixed, with Nifty Smallcap 100 index closing in the green while Nifty Midcap 100 index closed nearly 1 percent lower. Bharti Infratel was the Nifty50 index top gainer.

Indian indices ended in the green on Monday after swinging in between gains and losses.

The Rs 702 crore initial public offer (IPO) of Bengaluru-based IT services provider Happiest Minds Technologies has sailed through on day one of the bidding process. The issue was subscribed by 117 percent so far. It received bids for around 2.8 crore equity shares as against the IPO size of over 2.32 crore shares, according to the data available on the exchanges. The reserved portion for retail investors was subscribed 5.8 times and that of non-institutional investors by 25 percent. The reserved portion for qualified institutional investors was subscribed 8 percent subscription. Read more here.

Rupee Update: The Indian currency ended lower on Monday amidst volatile equity market. The rupee ended at 73.35 against the US dollar as compared to Friday's close of 73.14.

Drugs shortage is expected in the US market due to disruption in pharma manufacturing supply chains and increased demand for drugs, which are being used in the management of COVID-19 patients.

Axis Securities believes that Aurobindo Pharma being an export-oriented pharma company with a large drug portfolio, adequate manufacturing capacity and a strong compliance track record before USFDA is expected to get benefit due to drug shortage in the US market. Continue reading

Go long on Hindustan Unilever (HUL), said Jain. "The stock has been consolidating since last few weeks and today if we see prices are showing a bounce back from the support end of the consolidation phase, and coinciding with the 200-day moving average support, then go long on HUL with a stop below of Rs 2,115 and a target of Rs 2,230," added Jain.

“We are expecting some profit booking in Mahindra & Mahindra (M&M). Since last three weeks the stock is resisting its 200-day week moving average. The profit booking could lead the stock towards Rs 575, one can go short on M&M on a minor pullback from here onwards and around Rs 616-618 keeping a stop above Rs 636 for target of Rs 575,” Jain said further.

Stock Update: VA Tech Wabag's shares traded over half a percent lower to Rs 197.45 per share on the NSE on Monday despite company securing a $48 million contract for a sewage treatment plant at the New Jeddah Airport. The order is worth Rs 380 crore, and will expand the company's footprints in the Middle-East. The share price of Vodafone Idea traded nearly 4 percent during the afternoon trade on Monday after it launched a unified brand "Vi", marking the completion of the merger between two telecom companies.

The company believes a single-brand approach will reduce the cost of maintaining two brands and also improve operational efficiency.

Ravinder Takkar, MD & CEO, Vodafone Idea Ltd said, "Vodafone Idea came together as a merged entity two years ago. We have, since then focussed on integrating two large networks, our people and processes. And today I am delighted to present Vi, a brand that will bring important meaning to lives of our customers."

Gold prices in India traded marginally higher on the Multi Commodity Exchange (MCX) Monday following positive momentum in the international spot prices amid weak US dollar. The dollar index declined from its one-week high level hit in the previous session. Silver prices rose by over 1 percent.

Last week, Gold prices corrected by 1.50 percent while silver prices also corrected sharply by 2.28 percent due to a sharp recovery in the US Dollar Index on the back of a fall in US Jobless claim and positive economic data. Read more

Getting adequate interest from bidders. Government will have no board seat post divestment, says BPCL Vodafone Idea on Monday launched a unified brand "Vi", marking the completion of the merger between two telecom companies.

Launching the new brand, Ravinder Takkar, MD & CEO, Vodafone Idea Ltd said, "Vodafone Idea came together as a merged entity two years ago. We have, since then focussed on integrating two large networks, our people and processes. And today I am delighted to present Vi, a brand that will bring important meaning to lives of our customers."

Takkar further added, "The brand integration not only marks the completion of the largest telecom merger in the world but also sets us on our future journey to offer world class digital experiences to 1 Billion Indians on our strong 4G network."

Photos connected to the branding exercise were already doing the rounds of Twitter showing stores being revamped with the new VI logo. Here's more

At upper price band it is offered at 23.6x FY2020 EPS. Considering the very high exposure to digital services and strong promoter background we expect that the company will continue to grow at a faster pace as compared to similar sized companies and therefore should command a premium valuation to the peer group. We would therefore recommend investors to Subscribe to the IPO.

COVID-19 has led to a delay in recovery, says Yes Bank’s Prashant Kumar

Yes Bank's management team has been on a recovery drive. From attaching properties of diamond traders to going after honchos of beleaguered NBFC's, the bank is leaving nothing to chance. Speaking to CNBC-TV18, Prashant Kumar, MD & CEO, Yes Bank said that the recovery target is there for the entire stressed book but the pandemic has led to a delay in recovery. “Recovery target would be for the entire stressed book; it is an issue about the timing. Because of COVID, what we are seeing is that the targets which we were expecting during the current financial year—that has slowed down a bit. But I think we are absolutely on track and during the current year and going forward I think we will be able to recover,” he said. More here

The initial public offer (IPO) of Bengaluru-based IT services provider Happiest Minds Technologies opened today with a price band at Rs 165-166 per share. The issue will close on closes on September 9 and the shares will be listed on September 17. The Rs 702 crore-IPO comprises of fresh issue of Rs 110 crore and an offer for sale aggregating upto 3.56 crore equity shares. Most analysts are bullish on the company since 97 percent of its business comes from the digital services segment. They advise subscribing to the issue based on robust financial growth, attractive valuations and strong management. More here

JUST IN: Steel Strips gets export orders of nearly 12,000 wheels for US & EU trailer market, to be executed in the month of October from its Chennai plant

Sterling & Wilson up 6% on order wins worth Rs 1,600 crore in Australia

Shares of Sterling & Wilson Solar climbed 6 percent to Rs 285 on the BSE on Monday after the company announced that it has signed orders worth around Rs 1,600 crore (AUD 300 million) in Australia. “The company along with its branch and Australian subsidiary has bagged two large scale solar projects in the country which will have an installed capacity of over 300 MW. The new projects have been secured from global independent power producer (IPPs), the work for which is expected to commence immediately,” Sterling & Wilson Solar said in a press release.
Share: “Short Hero MotoCorp wherein a stop loss could be placed at Rs 2,970 and a target price of Rs 2,750. Looking at a shift in terms of leadership from auto now becoming laggard going forward.”

“Buy Zee Enterprises wherein we look towards a target price of Rs 240 and a stop loss at Rs 213. The media index after a long time has crossed above the 200 day moving average as well as it has crossed the recent highs. So, this is an interesting space to look out for.”
Share:

Gold edged higher on Monday after weak US data raised concerns over a quick economic rebound from the coronavirus-led slump and cemented hopes that lower interest rates would last longer. Spot gold was up 0.2 percent at USD 1,935.50 per ounce by 0341 GMT, moving further away from a one-week low of USD 1,916.24 touched on Friday. US markets are shut for the Labor Day holiday on Monday. US gold futures rose 0.5 percent to USD 1,943.40. "The general theme from last week's US jobs report showed that the recovery is continuing to slow. So really, the payroll gains were weak in the overall context," said Stephen Innes, chief market strategist at financial services firm AxiCorp. "Also, the lower for longer interest rates narrative continues to chime well for the gold bulls right now."
Share:

China's exports rose for the third consecutive month in August, eclipsing an extended fall in imports, as more of its trading partners relaxed coronavirus lockdowns in a further boost to the recovery in the world's second-biggest economy. Exports in August rose a solid 9.5 percent from a year earlier, customs data showed on Monday, marking the strongest gain since March 2019. The figure also beat analysts' expectations for 7.1 percent growth and compared with a 7.2 percent increase in July. Imports however slumped 2.1 percent, compared with market expectations for a 0.1 percent increase and extending a 1.4 percent fall in July.

Vodafone Idea's shares rallied 10 percent intraday on Monday as the company is set to make a major announcement today at 11:45 am. The stock gained as much as 10 percent to Rs 13.25 per share on the NSE. Reports suggest that Verizon and Amazon may invest over $4 billion in Vodafone Idea. In an exchanges filing, the telecom operator said while the company constantly evaluates various opportunities for enhancing the stakeholders’ value, there is no such proposal being considered at present. On September 6, Vodafone India's Twitter handle teased the announcement on Twitter, referring to it as the 'big day', which has raised the suspicion at the Street. 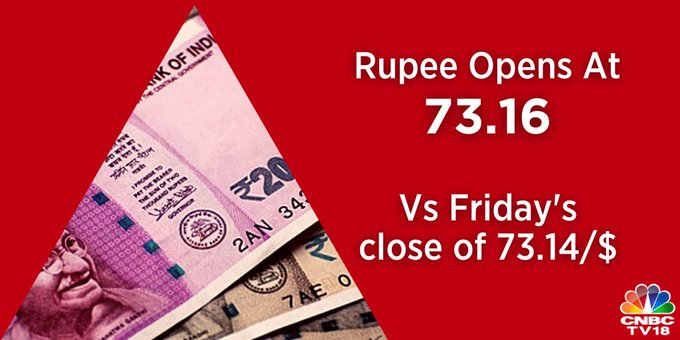 Calling for a collaborative approach among stakeholders, Tata Motors MD and CEO Guenter Butschek on Saturday said there are new challenges for the automotive industry in the restart phase of the economy. "Now that we are in the restart phase, new challenges like growing virus cases and acute shortage of labour have come up. The end of the lockdown doesn't necessarily mean that we are post-COVID because it is still there, it can possibly create more intermittent disruptions," Butschek said. He was speaking at the 60th annual convention of the Automotive Component Manufacturers Association of India (ACMA) in New Delhi on Saturday.
Share:

Jefferies on HDFC Bank: The brokerage has a 'buy' rating on the stock with a target at Rs 1,350 per share. Law firms in US filed a class action suit, the brokerage stated but added that nocase has been filed yet as firms are soliciting interest from investors.

Morgan Stanley on BPCL: The brokerage is 'overweight' on the stock with a target at Rs 517 per share. It added that the sale, if executed well, could lead to a re-rating of the multople for the industry.

Kotak on NALCO: The brokerage maintains a 'sell' call on the stock with a target at Rs 26 per share. It said that the company's alumina margin was impacted by weak prices and it sees downside risks to current price.

CLSA on Coal India: The brokerage maintains 'buy' call on the stock but cut its target to Rs 155 per share from Rs 160 earlier. It added that risk-reward is attractive at current levels.

CLSA on Consumer: As per the brokerage, competitive intensity in AC firming up and market consolidation is unlikely to challenge Voltas' leadership. It added that it would be difficult for Havells to regains its market leading position.