Stock Market Highlights: The Sensex ended 210 points lower at 34,961 while the Nifty fell 70 points to settle at 10,312. Index heavyweights Infosys, RIL, Axis Bank and HDFC contributed the most to the losses.

- Sensex and Nifty End With Cuts Of Over 0.5 percent, Midcap Index Down 1.6 percent

Indian shares ended lower on Monday as a jump in coronavirus cases stoked fears of renewed restrictions that could hit business activities, dimming hopes of a quick economic recovery. The Sensex ended 210 points lower at 34,961 while the Nifty fell 70 points to settle at 10,312. Index heavyweights Infosys, RIL, Axis Bank and HDFC contributed the most to the losses. Meanwhile, on the global front, MSCI’s broadest index of Asia-Pacific shares outside Japan fell 0.6 percent.

S&P affirms China; flags risk to growth from coronavirus, tensions with US

Credit rating agency S&P Global Ratings on Monday affirmed China's sovereign credit ratings at 'A+/A-1' with a stable outlook, amid the ongoing coronavirus outbreak. S&P said China is likely to maintain above-average economic growth relative to other middle-income economies in the next few years. However, it said that the growth is likely to come under pressure from the coronavirus outbreak, efforts to restructure the Chinese economy and US-China tensions.

Sun TV’s subscription revenues are firing on all cylinders and the growth is adequate to make up for the overall decline because of weak advertising revenues, the company’s Group CFO, SL Narayanan…

The first month of lockdown saw a fall in consumer debt by a whopping Rs 50,076 crore. While the month of April usually sees a decline in consumer leverage, the fall is almost 16 times higher than the same period last year. These findings have been highlighted by the research department of State Bank of India in their latest SBI Ecowrap report. The overall short-term consumer leverage which recorded a fall includes credit card spends, personal loans, advances against FD, shares, bonds outstanding, etcetera.

Soumya Kanti Ghosh, Group Chief Economist at SBI noted in the report, “There is an interesting shift in possible consumer behaviour during lockdown that could have wider positive ramifications for the India banking system.” Read more.

The share price of Ashok Leyland declined over 6 percent on Monday after global research firm CLSA maintained its 'Underperform' rating on the stock. The stock fell as much as 6.78 percent to hit an intraday low of Rs 48.80 on the BSE. CLSA has maintained its 'Underperform' rating on the stock but raised the target price to Rs 53 from Rs 47 per share earlier. The brokerage also raised its FY21-22 EBITDA by 6-8 percent and does not expect any meaningful positive triggers in the near term. It believes that the truck cycle is likely to revive only in FY22.

European shares edged higher on Monday as investors clung to hopes of a quicker economic recovery in the continent even as coronavirus cases surged globally. The pan-European STOXX 600 index rose 0.2 percent after opening in the red, lifted by automakers .SXAP and travel & leisure companies. European markets have outperformed in the recent weeks, helped by its relative success in reopening its economy and the European Union’s proposed 750 billion euro ($841.73 billion) recovery fund.

The share price of cigarette major ITC gained over 4 percent in the early trade on Monday after the company reported a 9.05 percent on-year rise in Q4FY20 standalone net profit to Rs 3,797.08 crore supported by lower tax cost and robust operating performance in FMCG segment. The stock rose as much as 4.1 percent to Rs 203.10 per share on the BSE. ITC’s revenue from operations during the quarter fell 6.4 percent to Rs 11,420.04 crore from Rs 12,206.03 crore, YoY, hit by nationwide lockdown that starting March. The company’s cigarette volumes were down by around 9-10 percent.

Bengaluru-based realty firm Sobha Ltd has reported a 5 percent decline in its consolidated net profit at Rs 281.5 crore for the last fiscal despite higher income and achieved strong sales bookings of Rs 2,881 crore. Its net profit stood at Rs 297.1 crore in the financial year 2018-19. Total income, however, rose to Rs 3,825.7 crore in 2019-20 from Rs 3,515.6 crore in the preceding fiscal. Net profit in the fourth quarter of FY20 fell to Rs 50.7 crore from Rs 113.3 crore in the year-ago period. Total income for the March quarter dipped to Rs 927.6 crore from Rs 1,421.6 crore in the corresponding period of the previous year.

China’s factory activity likely grew for the fourth month June but the pace may be waning, as global demand stayed subdued while a fresh coronavirus outbreak in the Chinese capital and rising worldwide cases threaten to undermine a gradual domestic recovery. The official manufacturing Purchasing Manager’s Index (PMI), due for release on Tuesday, is expected to ease to 50.4 in June, from 50.6 in May, according to the median forecast of 29 economists polled by Reuters. A reading above 50 indicates an expansion in activity.

Asian share markets began the week with a cautious tone on Monday as the relentless spread of the coronavirus finally made investors question their optimism on the global economy, benefiting safe harbour bonds and crimping oil prices. MSCI’s broadest index of Asia-Pacific shares outside Japan fell 1.3% and further away from a four-month top hit last week. Japan’s Nikkei shed 2.2 percent and Chinese blue chips 0.9 percent.

Aterrorist attack was reported near the Pakistan Stock Exchange in Karachi on Monday, killing two people and leaving three injured, DawnNewsTV reported. The report said that at least 5 terrorists tried to enter the trading hall.

1) Infosys is a buy, which has given a breakout above Rs 740 yesterday and has been sustaining well relatively today. So stop loss at Rs 720 and a short-term target price of Rs 780.

2) Second is a sell on Piramal Enterprises, which has recovered very sharply from the lows but going forward a little longer in the chart, Rs 1,350-1,400 was a major support, which was broken and now it should act as a resistance. So at current levels it would be a short with a stop loss of Rs 1,340 and a target price of Rs 1,220 on the lower side.

Shares of Emami slipped 6 percent to Rs 207 on the BSE on Monday after the company reported disappointing set of numbers for the quarter ended March 2020 (Q4FY20), impacted severely by the Covid-19 pandemic. The personal products company’s profit before tax before exceptional items (PBT) declined by 70 per cent year on year (y-o-y) to Rs 25.37 crore in Q4FY20, from Rs 84.77 crore in Q4FY19. Profit after tax during the quarter under review more-than-halved to Rs 23.36 crore from Rs 56.15 crore.

Auto industry body SIAM has requested government to help clear up import congestion at ports, sources informed CNBCTV-18. Sources say auto manufacturers may start feeling the impact of disruptions if the congestion at ports continues for another week. Electric vehicle manufacturers are likely to be impacted more due to import disruptions. Meanwhile, shipments continue to be stuck at sea for the seventh day after "unofficial" orders at commissionerates across the country withheld China-origin consignments for a 100 percent examination. There is still no move on actually conducting the examination and subsequent clearance of these stranded China-origin containers, worsening the congestion at ports, which were already struggling with month-long delays in import clearances during the COVID-19 lockdown, sources in the know told CNBC-TV18.

Foreign inflows help rupee strengthen against the US dollar

The Indian rupee has appreciated 0.72 percent this week against the US dollar on the back of robust foreign capital inflows in the Indian markets. From 76.19 on last Friday, the USD/INR spot was at 75.64 level today. On Friday, the Indian currency erased some intraday gains and ended at 75.64 level per dollar, amid buying seen in the domestic equity market. It opened higher by 14 paise at 75.52 per dollar against the previous close of 75.66.

"ITC has been aggressive in its FMCG business – launching sanitizers and hand washes, leveraging its extensive distribution network and acquiring a key regional spice brand. However, it has lost around 40 days of cigarette sales due to the lockdown. Its hotels and paper segments, too, are likely to be impacted due to the loss of business. While it missed the Street estimates due to a decline in revenues across all segments, the performance of its FMCG segment has kindled hopes of an improved show in the latter part of the year," said Rajit Rajoriya, Equity Research Associate, Angel Broking Ltd.

Technical view: The markets have opened in the middle of its current range which is between 10,200 and 10,450. Unless we do not cross or break one side, we will be sideways for the week. While the underlying tone still seems bullish, we would need to concentrate on the 10,200 levels which if broken can drop to levels closer to 10,000. On the upside we need to go past 10,450 on closing and then target 10,700, said Manish Hathiramani, Index Trader and Technical Analyst, Deen Dayal Investments.

Rupee opens: Indian rupee opened flat at 75.63 per dollar on Monday against Friday's close of 75.64. 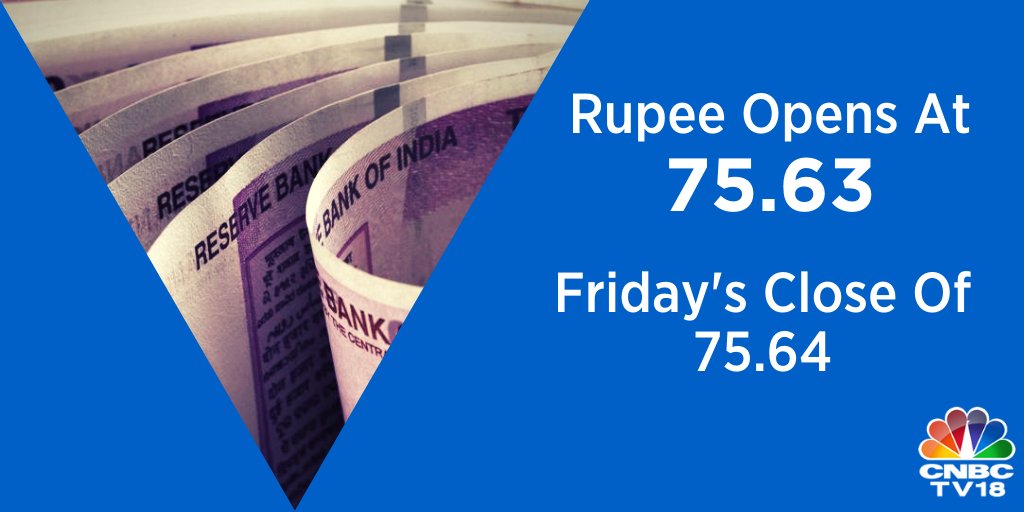 Jefferies, Macquarie, and CLSA are bullish on ITC post its March-quarter numbers. Morgan Stanley retained an 'overweight' rating on Apollo Hospitals. Here are the top brokerage calls for today:Get…