CNBC-TV18's top stocks to watch out for
Asian shares jump on hopes for low rates, oil up on cyber attack
India offers to lift regular Saudi oil volumes in June after May cuts: Sources
Rupee rallies 18 paise to 73.33 against US dollar in early trade
Nifty
Nifty SensexMCX

5. Metal & Pharma gain the most amongst indices; both up over 3%

Among sectors, Nifty Pharma and Nifty Metals rallied the most over 3 percent each followed by Nifty Auto, Nifty IT and Nifty Financial Services.

Stock Update: Larsen & Toubro's share price traded over 2.5 percent higher to Rs 1,061 per share on the NSE after it secured orders from prestigious clients for two of its businesses. L&T's Power Transmission a Distribution Business has won a slew of orders in the international market. The heavy civil infrastructure business has secured another Regional Rapid Transit System (RRTS) Infrastructure order from the National Capital Region Transport Corporation (NCRTC) in Uttar Pradesh to execute a new, dedicated, high speed, high capacity rail project in the Delhi - Gaziabad - Meerut Corridor. 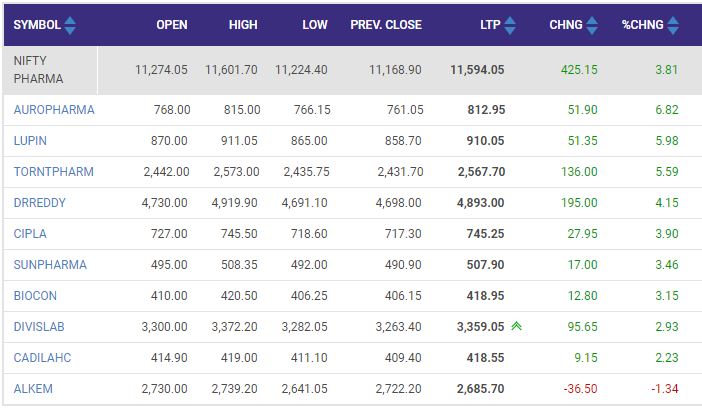 ICICI Bank said that its mortgage loan portfolio has crossed Rs 2 lakh crore helped by the bank’s expansion of footprint across the country including tier 2, 3 and 4 cities.

In a release issued on Wednesday, the lender said that it has become the first private bank in the country to achieve this milestone that can be attributed to its focus on digitizing the entire mortgage process along with instant loan approvals.

“Anticipating rapid growth in demand in upcoming cities for real estate especially in the affordable segment, we have expanded our footprint far and wide. Now, we are present in 1,100 locations, including tier 2, 3 and 4 cities as well as fast-growing outskirts of metro cities. We have also scaled-up our credit processing centers from around 170 to over 200 in past two years in these new markets for efficient processing and quick turn-around for customers,” said Anup Bagchi, Executive Director, ICICI Bank. Read more here.

The company’s Power Transmission a Distribution business has won a slew of orders in the international market. In Nepal, the business has won an order to Design, Supply, Installation and Commission a crucial 220kV Gas Insulated Substation along with associated works in connected substations. The package is part of the Power Transmission and Distribution Efficiency Enhancement Project being undertaken to reduce system overloads and losses in the valley. In the Kingdom of Saudi Arabia, the business has received orders to establish certain transmission links in the existing 132kV network.

Best-performing sector: Nifty Bank jumps 20% in a month. Should you buy stocks?

The banking index has been the best-performing sector in the last one month. It has outperformed the benchmark as well as all the other sectoral indices during this period.

The Nifty Bank jumped over 20 percent in the last 1 month as compared to a 6 percent rise in benchmark Nifty50. Nifty Finance was a close second, up 18 percent in 1 month. Nifty Energy, Nifty Metal, and Nifty Realty rose between 5 percent and 14 percent. Meanwhile, the IT and pharma indices were in the red during this period.

Despite the big run-up in recent times, global brokerage house CLSA maintains a positive view on the sector and sees a further upside.

As per CLSA, the September quarter has been a turning point for financials with better-than-expected PPOP performance and strong asset quality guidance by top banks. Click here to read more

The share price of Mahindra & Mahindra (M&M) rose 4 percent on Wednesday after the firm reported its revenue ahead of estimates, up 6 percent in the September quarter at Rs 11,590 crore as against Rs 10,935 crore a year ago.

However, the auto major reported an 88 percent drop in its profit after tax (PAT) to Rs 162 crore for the second quarter ended September 30, mainly on account of an impairment provision of Rs 1,149.46 crore for certain long-term investments.

The auto major had reported a PAT of Rs 1,355 crore during the July-September period of the previous fiscal.

Brokerage house CLSA noted that Q2 FY21 operating results came in significantly ahead of its expectations, despite the decline. Read more

#CNBCTV18Exclusive | Sources say Tata Steel is likely to finalise sale of its European biz this wk, Sweden's SSAB is the frontrunner to buy it. CNBC-TV18 is awaiting co’s response w.r.t the same.

Stock Update: Wipro's shares traded 0.09 percent higher to Rs 342.6 per share on the NSE after the company won a multi-year contract for software engineering services from ThoughtSpot. As a part of the five-year engagement, Wipro will enhance various components of ThoughtSpot's Search and Analytics platform to help scale feature development.

KPIT Technologies' share price jumped 8 percent on Wednesday after the company won a strategic large deal with BMW Group. The stock gained as much as 8 percent to Rs 102 per share on the NSE. At 11:45 am, the shares traded 3.23 percent quoting at Rs 97.5.

The series order is spread over several years, added the filing further. Any details on the deal amount were not stated in the company filing.

Godrej Properties expects debt levels to go up in the near term as co is launching 2-3 new projects. Also, it’s looking to invest Rs 1,000-1,500 cr in hsg fin arm in the next 2-3 years pic.twitter.com/MK6IjcDF9m

Shares of Yes Bank were locked in a 5 percent upper circuit for the third straight day at Rs 14.21 on the BSE. The jump in the stock price comes after two positive developments. MSCI Inc., the world’s largest index compiler with assets worth $15 trillion benchmarked indices, has included Yes Bank to its standard index - MSCI India Domestic Index after its semi-annual review. On Tuesday, CARE Ratings revised its rating on Yes Bank's debt instrument. The rating agency has revised the bank's infrastructure bonds rating to 'CARE BBB' from the previous 'CARE B'. CARE has also revised its outlook to ‘Stable’ from the previous “Under Credit watch with Developing Implications” on the above-mentioned instruments.

Shares of Yes Bank were locked in a 5 percent upper circuit for the third straight day at Rs 14.21 on the BSE. The jump in the stock price comes after two positive developments.

On Tuesday, CARE Ratings revised its rating on Yes Bank's debt instrument. The rating agency has revised the bank's infrastructure bonds rating to 'CARE BBB' from the previous 'CARE B'. Read more here.

While the revenue growth is flat on a YY basis the company has posted a strong revenue growth sequentially of 84.3% QoQ. The sequential growth was across segments including MSSL standalone, SMR, SMP, PKC and others as all segments swung from an EBIT loss to profit. The improvement in performance sequentially has largely been due to improvement in demand from the end user industry. However, going forward the markets will be monitoring the Covid situation in Europe given that the company derives significant part of its revenues from Europe.

Banking stocks have been on a tear of late. Does the rally have legs? CNBC-TV18 spoke to Sameer Bhise, Banking Research Analyst at JM Financial Institutional Securities, for his outlook on the sector. Bhise said, “Large banks have rallied, we continue to remain positive on large banks. I think 2-3 underlying themes which I wanted to highlight - clearly collection commentary has been better than what most market analysts expected, at the same time at the starting point of the NPL recognition cycle banks are starting at a much stronger footing than past cycles. So capital raising have been done upfront, provisions have been created so from a starting point perspective large banks are in a much better shape.” More here

Hindalco Industries on Tuesday reported a 60.2 percent fall in consolidated profit after tax (PAT) at Rs 387 crore for the quarter ended September 30 but said it is expecting a strong third and fourth quarter as demand has returned in domestic as well as export markets. The company's PAT declined during the second quarter due to a one-time impact of Rs 1,398 crore on account of the divestiture of the Lewisport unit of Aleris in the US, Hindalco Industries Ltd Managing Director Satish Pai told reporters at a virtual meeting. The company had posted a PAT of Rs 974 crore in the corresponding quarter of previous fiscal, Hindalco Industries Ltd said in a filing to the BSE. However, its revenue from operations during the July-September quarter rose to Rs 31,237 crore from Rs 29,657 crore in the year-ago period. More here

MSCI semi-annual index review: Check out the additions and deletions MSCI has released its semi-annual index review and 12 stocks have been added to the MSCI Global Standard Index. India’s weightage has risen because of the changes. Most of the brokerages are expecting…

Shares of M&M rose 4 percent on Wednesday after the firm's revenue was ahead of estimates, up 6 percent in the September quarter at Rs 11,590 crore as against Rs 10,935 crore a year ago. However, the auto major reported an 88 percent drop in its profit after tax (PAT) to Rs 162 crore for the second quarter ended September 30, mainly on account of an impairment provision of Rs 1,149.46 crore for certain long-term investments. The stock rose as much as 4 percent to the day's high of Rs 644.45 per share on BSE. For the year as well, the stock is up 20 percent. Despite the decline in profit, brokerage house CLSA Q2 FY21 operating results came significantly ahead of expectations.
Share:

"We have successfully achieved the target given few days back of 12,650. If we are able to maintain above 12,750, the next target to look out for would be the magical level of 13,000. This may not be a one-way move but the trend remains positive and the momentum is fierce. Every dip or correction can be utilised to build long positions."

Emerging market (EM) guru Mark Mobius, Founder of Mobius Capital Partners sees a v-shaped recovery in the global economy next year. “The market is already beginning to factor that in,” he added. “We have been pleased with the performance of the shares that we have in India and as a result the weightage in our portfolio is the biggest for India,” Mobius said. “We have been focusing more on the infrastructure in India and also on the technology side,” he said. Technology is the largest single sector in our portfolio, he said. “What we are doing is not necessarily focusing on the internet or telecoms but we are focusing on nuts and bolts of technology,” Mobius said. More here

#2QWithCNBCTV18 | LIC Housing may see a decline of 11% in profit while NII can see a minor increase of 0.4%. NIM can remain stable QoQ pic.twitter.com/gyWus1Ktzl

Indian indices open at a record high on Wednesday as hopes for a successful coronavirus vaccine lifted sentiment across the globe. Gains in the domestic indices were led by banks, auto and pharma stocks. The Sensex rose 166 points to its new high of 43,444 while the Nifty rose 49 points to a new high of 12,680. Broader markets were also positive with the Nifty Midcap and Nifty Smallcap indcies up 0.5 percent and 0.2 percent, respectively. HDFC Life, GAIL, Divi's Labs, HCL Tech and ITC were the top gainer while, Bajaj Finserv, Powergrid, Axis Bank, ICICI Bank and Tech Mahindra led the losses.