From 26K in March 2020 to 50K now: Sensex among the world's best-performing indexes

Updated : January 21, 2021 01:44 PM IST
With the exception of NASDAQ, the Sensex has beaten every benchmark index in the world's top six economies.

On March 23, the Sensex saw its worst-single day fall in history, falling over 13 percent to below 26,000, foreboding the months-long lockdown that Prime Minister Narendra Modi was to announce the next day to combat the looming war against COVID-19.

Fast-forward ten months later, and the Sensex took out 50,000 for the first time in history, joining a global stock market boom egged on by a spending spree taken up by governments and central banks.

Along the way, the Sensex has not only hiked a 10,000-point journey – climbing from 40,000 to 50,000 in less than three months -- in the shortest period but has also outperformed most leading global indices.

Since March 23, when most indexes globally bottomed out, the Sensex has risen about 87 percent. This beats all the leading benchmark indexes around the world with the exception of Nasdaq, a technology-heavy index, which has risen 92 percent.

Below is the chart of the world’s top indexes (rebased to a common base of 100) and how they have performance since March 23. 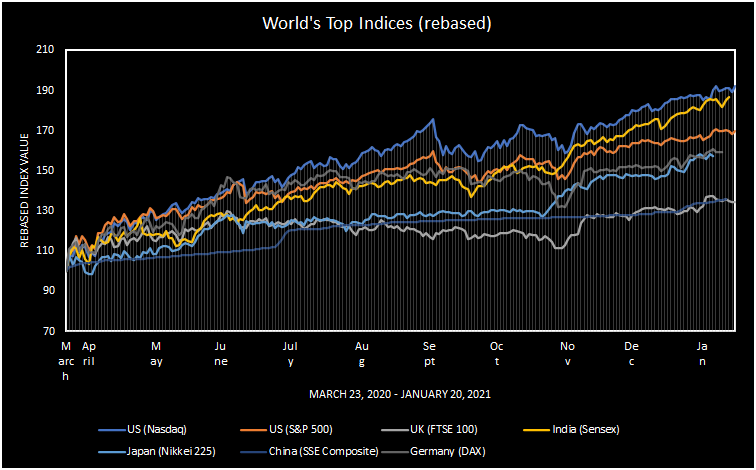 The Sensex's performance has also dwarfed indexes of India's immediate neighbours such as Pakistan, Bangladesh and Sri Lanka, even though smaller stock markets tend to do better than bigger ones during a boom -- being high-beta in nature.