Sensex and Nifty bounce back from 2-month lows on positive global cues — rupee strengthens to 81.61 vs dollar

Sensex and Nifty bounce back from 2-month lows on positive global cues — rupee strengthens to 81.61 vs dollar The Sensex and the Nifty50 began the last session of the September derivatives series in the green amid a rebound across global equities. Investors awaited the outcome of a three-day RBI policy meeting due on Friday for domestic cues.

Indian equity benchmarks made a comeback on Thursday tracking a rebound across global equities following days of selling pressure amid fears that steep hikes in COVID-era interest rates might cause an economic downturn. Gains across sectors pushed the headline indices higher, with financial, oil & gas, FMCG and metal shares being the biggest boosts.

Investors await the outcome of three-day deliberations at the RBI's rate-setting panel due on Friday for domestic cues. Analysts say volatility may persist ahead of the expiry of monthly derivative contracts due by the end of the session.
The Sensex rose 567.9 points to touch 57,166.1 in the first few minutes of trade and the Nifty50 climbed to as high as 17,026.1, up 167.5 points from its previous close — gaining one percent each.
Barring Asian Paints, which edged 0.2 percent lower, all of the Nifty50's constituents began the day in the green. Tata Motors, Tata Steel, IndusInd, Hindalco and Bajaj Finance were the top gainers. 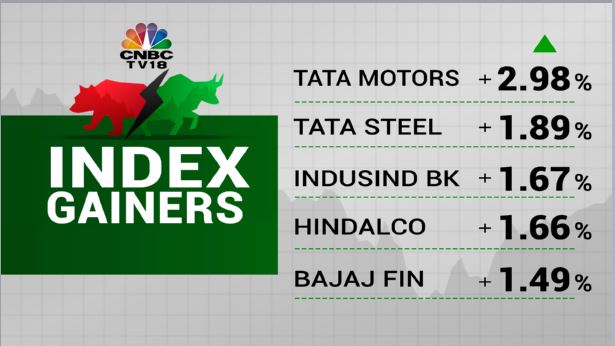 Adani Ports, Tech Mahindra, ITC, Bajaj Finserv, Reliance, Mahindra & Mahindra and ICICI Bank — rising around one percent each — were also among the blue-chip stocks that rose the most.
Reliance, ICICI Bank, ITC, the HDFC twins and Infosys were the biggest contributors to the gain in both main indices.
All the sectors were in the green on NSE, with the Nifty PSU Bank being hte top gainer. "When negative sentiments become dominant, the risk-off (sentiment) gathers momentum and markets get oversold. Then, usually, an unexpected trigger reverses the near-term outlook leading to short covering and a rally. This is precisely what happened on Wednesday after the BoE surprised markets with quantitative easing," said VK Vijayakumar, Chief Investment Strategist at Geojit Financial Services.
"This is more a reflection of the UK's economic woes. But the markets' interpretation of the BoE’s surprise decision is that the Fed might pause its rate hike to avert a sharp economic downturn. The relief rally is likely to soon run out of steam," he added.
Overall market breadth was extremely positive, as 1,903 stocks rose and 347 fell in early deals on BSE.

Global markets
Equities in other Asian markets rose, mirroring an overnight jump on Wall Street on the back of falling Treasury yields, with MSCI’s broadest index of Asia Pacific shares outside Japan trading up 0.9 percent at the last count. Japan’s Nikkei 225 was up 1.1 percent.
S&P 500 futures were down 0.1 percent, suggesting a muted start on Wall Street later in the day. On Wednesday, the S&P 500, the Dow Jones and the Nasdaq Composite finished around two percent higher each.
Catch latest market updates with CNBCTV18.com's blog
Check out our in-depth Market Coverage, Business News & get real-time Stock Market Updates on CNBC-TV18. Also, Watch our channels CNBC-TV18, CNBC Awaaz and CNBC Bajar Live on-the-go!