Investors lose Rs 10.2 lakh crore in 3 trading sessions as market fails to hold on to recovery

Investors lose Rs 10.2 lakh crore in 3 trading sessions as market fails to hold on to recovery

Indian equity benchmark indices failed to hold on to the recovery on Tuesday and closed at a fresh 11-month low, with Nifty below 15,750. Investors lost Rs 10.2 lakh crore in wealth in three trading sessions, as the market cap of BSE-listed companies came down to Rs 244.8 lakh crore, according to data from provisional exchanges. 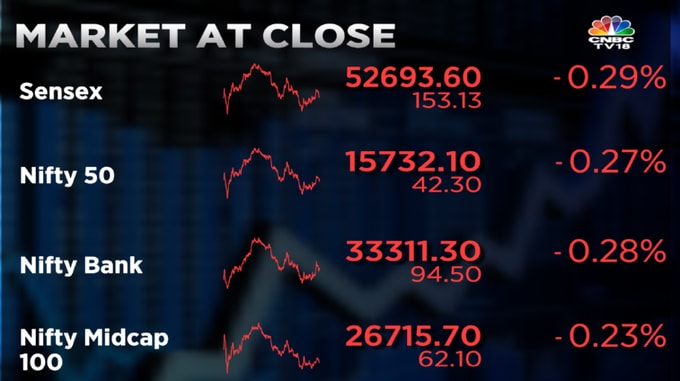 About 1,506 shares have advanced, 1,730 shares declined, and 132 shares are unchanged.
Among the top Nifty losers were Bajaj Auto, IndusInd Bank, Hindalco Industries, ONGC and Tech Mahindra. On the other hand, NTPC, M&M, Bharti Airtel, Apollo Hospitals and Divis Labs were among the major gainers on Nifty.
Amid sectoral indices, auto, metal and oil & gas ended in the red, while capital goods, power and realty indices ended with gains. The BSE midcap and smallcap indices ended marginally lower.
Dr Reddy's Laboratories (DRL) shares rose on Tuesday after the drug major announced the launch of a generic version of Nexavar tablets in the US. The drug — also known as Sorafenib — is used to treat certain types of liver, kidney and thyroid cancer. (Read More
)
Bajaj Auto shares gave up initial gains in choppy trade on Tuesday, ahead of a key meeting of the automobile major's board to consider a proposed buyback of equity. The Bajaj Auto stock fell by as much as Rs 117.6 or three percent to Rs 3,763 a piece on BSE, having begun the day marginally in the green at Rs 3,890. (Read More)
Adani Enterprises Ltd shares jumped more than 9 percent in an unexplained pre-open surge on Tuesday. The stock had closed at Rs 2,079.75 on Monday and opened at the day's high of Rs 2,274 on NSE. (Read More)
Catch all the live market updates with CNBC-TV18
Check out our in-depth Market Coverage, Business News & get real-time Stock Market Updates on CNBC-TV18. Also, Watch our channels CNBC-TV18, CNBC Awaaz and CNBC Bajar Live on-the-go!