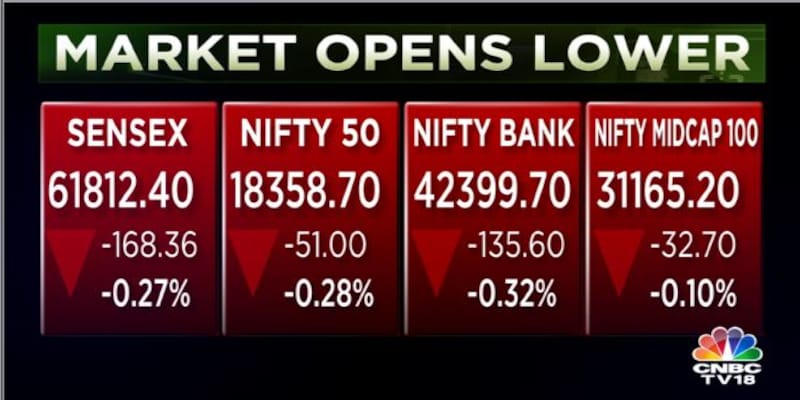 The Sensex and the Nifty50 remained in the red for much of the session so far amid choppy trade. Globally, investors remained on the back foot assessing the impact of more of steep hikes in COVID-era interest rates on economic growth.

Indian equity benchmarks struggled below the flatline on Thursday, briefly making it to the green but failing to hold on it,  as gains in heavyweights such as Larsen & Toubro, ICICI Bank, ITC and Reliance were offset by losses in the HDFC twins, Infosys and Titan. Globally, investors remained on the back foot assessing the impact of more of steep hikes in COVID-era interest rates on economic growth.

The Sensex gyrated within a range of 281.8 points during the session, between 61,769 and 62,050.8, following a weak start. The Nifty50 moved broadly in the  18,350-18,450 band as against its previous close of 18,409.7.
At noon, 30 stocks in the Nifty50 basket rose. Titan, Apollo Hospitals, Tata Motors, Dr Reddy's, Eicher, Hindalco, Mahindra & Mahindra, Grasim, Tech Mahindra and Maruti Suzuki were the top laggards, declining around 1-2 percent each.
Infosys, HDFC, HDFC Bank, Titan and Maruti Suzuki were the biggest drags on both headline indices.
On the other hand, Larsen & Toubro, Tata Consumer, Adani Enterprises, HDFC Life, UPL, Adani Ports, ICICI Bank, Reliance, Bajaj Finance and Hero MotoCorp — quoting between 0.5 percent and 2.3 percent lower — were the top gainers.
Broader indices succumbed to selling pressure, with the Nifty Midcap 100 and the Nifty Smallcap 100 slipping around half a percent each — reflecting caution in the smaller segments.
The Nifty Bank — whose 12 constituents include the country's top lenders SBI and HDFC Bank — was under pressure but not far from its all-time high of
42,611.8 clocked the previous day. HDFC Bank shares, falling as much as one percent during the session, weighed on the basket. Bharti Airtel shares strengthened by as much as Rs 6.5 or 0.8 percent to a record high of Rs 847.4 apiece, after the telecom major began 5G services at the Pune airport. 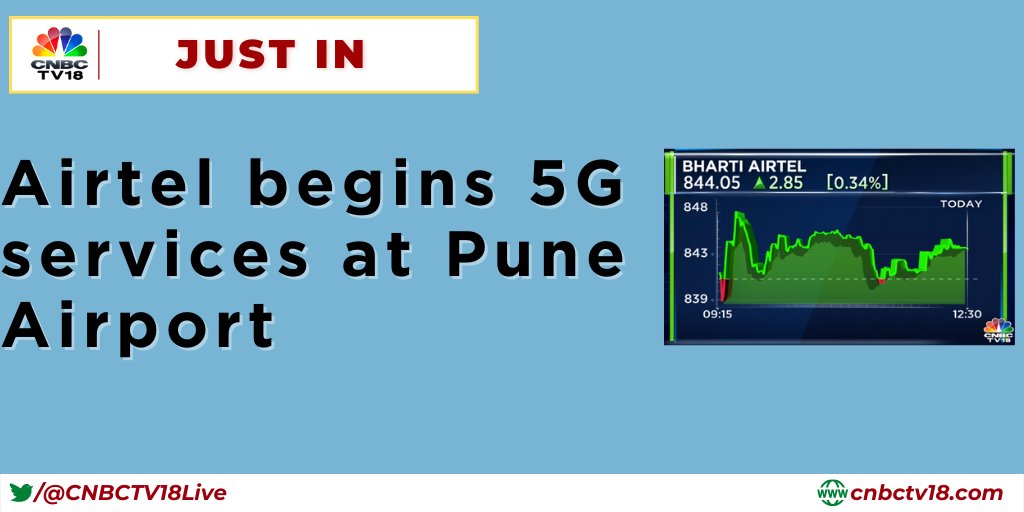 Overall market breadth was skewed in favour of the bears, as 1,468 stocks advanced and 1,904 declined on BSE at noon.

Many analysts remain optimistic of a rally in the market to record highs in the short term.
"I am very positive on the market, with headline indices surely set to scale new records before the end of 2022... A few months of irritation for the participants near all-time highs is always healthy for the next leg of bullishness," AK Prabhakar, Head of Research at IDBI Capital Markets, told CNBCTV18.com.
"In the past 13 months or so (since the record high in October 2021), the Nifty has stayed around 18,000 for some six-odd months which is a bullish sign for the coming months... The Nifty Bank has already started to outperform and everything else is also bound to strengthen in the last days of this (calendar) year," he said.
He believes beaten-down spaces like IT face some more margin pressure in the current quarter before a rebound along with other major spaces on the Street.
ALSO READ: Banking stocks poised to take Nifty50 to a record soon
India saw an overall mixed set of earnings for the quarter ended September, with Nifty profits averaging eight percent above Street estimates.
Invesco Mutual Fund Chief Investment Officer Taher Badshah told CNBC-TV18 it was a decent earnings season but there might not be significant upgrades going forward. He expects marginal upgrades in select largecap and financial stocks.
Global markets
Stoxx 600 futures were up 0.1 percent at the last count, suggesting a positive opening ahead in Europe. Earlier in the day, most of Asian markets suffered losses following a weak overnight handover from Wall Street.
Catch latest market updates with CNBCTV18.com's blog
Check out our in-depth Market Coverage, Business News & get real-time Stock Market Updates on CNBC-TV18. Also, Watch our channels CNBC-TV18, CNBC Awaaz and CNBC Bajar Live on-the-go!